The GT-9600-D Gundam Leopard Destroy is a Mobile Suit from the anime series After War Gundam X. It is piloted by Roybea Loy.

When the GT-9600 Gundam Leopard was heavily damaged in battle against the NRX-010 Gable, it was repaired and upgraded by Kid Salsamille with heavier firepower and a new paint job. The inner arm Gatling has been replaced by the twin beam cylinder, a pair of beam firearms that fold over both forearms when in use and are stored on the backpack when not in use. The missiles previously stored in the right shoulder was removed and replaced by a missile pod mounted to the side of the left shoulder. The suit also gained several other new weaponry and can still mount an optional missile pod on the lower left leg. The Leopard Destroy retained the set of rollers in its feet for high speed movements on the ground, and also has the option of combining with the aft section of the GS-9900 G-Falcon, granting it flight capability.

Gundam Leopard Destroy's main and most powerful weapon, replacing the destroyed Inner Arm Gatling. As implied by its name, the Twin Beam Cylinder consisted of two cylinders, the one on the right has a 4-barrel beam gatling gun and three smaller beam guns, while the one on the left is equipped with beam cannons of various design. While smaller than the Inner Arm Gatling, each cylinder has comparable firepower, meaning that the Twin Beam Cylinder have twice the firepower of the Inner Arm Gatling. Their smaller size also makes them easier to use. The Twin Beam Cylinders are mounted on either side of the backpack with their barrels retracted when not in use. When deployed, they swing forward to cover the forearms and their barrels extend.

A pair of chest-mounted gatling guns inherited from Gundam Leopard. Covered when not in use, they are effective in both close and long-range combat.

A pair of homing missiles stored within the knee armor. They are inherited from Gundam Leopard and are equipped with built-in infrared detection device, allowing them to automatically home in on their targets even in areas when radar are rendered useless.

A pair of small beam guns mounted in the head.

A pair of beam cannons are jointly mounted on the right shoulder. They can rotate about their mount, giving them a wide range of fire.

To improve the right shoulder's drive system, the Shoulder Missiles have been removed and as a replacement, a missile pod storing 11 missiles is attached to the side of the left shoulder.

Designed for use in space, five beam guns, consisting of one large-caliber gun and four small-caliber guns, are jointly mounted on the right forearm. Due to their placement, the guns are unusable when the right Beam Cylinder is in use.

Two launchers are mounted on top of each shoulder. Whether they're shell-firing or beam weapons depends on the source material.

A small, close combat beam weapon stored on the side of the right leg, inherited from Gundam Leopard. As it consumes less energy, it can be used for a long period of time.

An optional missile pod mounted on the side of the left leg that stores 4 medium-sized missiles, inherited from Gundam Leopard. Can be purged when required.

An optional hatchet-shaped weapon for close combat which utilizes a superheated special alloy blade to melt and cut through enemy armor. It is stored on the left side skirt armor when not in use.

The Gundam Leopard Destroy was first fielded by the crew of the Freeden during their raid on a Newtype Research Facility operated by the New United Nations Earth. It engaged multiple New UNE units before the facility was destroyed and the Freeden left the area to conduct another operation. Later, the Gundam Leopard Destroy was briefly captured by the New UNE after the Freeden was destroyed, but was quickly recovered by the North American Resistance Force under the command of Carris Nautilus. The Gundam was returned to Roybea Loy and became part of the mobile suit compliment of the Freeden II as it took part in the 8th Space War. 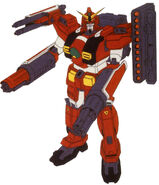 Multiple weapons in use 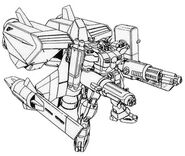 After the Freeden's destruction (Ep 31) 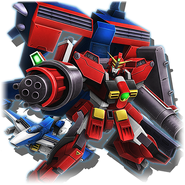