The GSX-401FW Stargazer is a civilian developed mobile suit designed to explore the regions of space beyond Mars's orbit. To accomplish this task the mobile suit is designed with two unique features. First, because of the vast reaches of space, the speed of light limit, and the limited space of a cockpit, it is impossible for a human pilot to complete the Stargazer's deep space exploration mission. For this reason, the Stargazer's two-seater cockpit is of modular design that can be replaced with an advanced A.I (artificial intelligence) computer that would control the mobile suit. The A.I. itself is a learning computer that uses inputted pilot data to learn proper piloting behavior. This data is acquired from human pilots piloting the Stargazer. To bring out its maximum potential the A.I. requires piloting data that adds up to ten-thousand hours.

The second important feature is its Voiture Lumiere propulsion system. Stargazer's version of the Voiture Lumiere is designed specifically for interplanetary propulsion, it works by catching solar wind on a curtain of light generated by the ring on its back and converts its energy into a strong light pressure which is then used as thrust. Alternatively, the system can also convert energy from a power beam fired from an external source instead of solar wind to propel the suit. When in use, the system causes interruption to the spatial structure of the surroundings. The ability of the Stargazer to deflect and capture incoming beam shots to create a field of shootable beam cutters during the battle with Phantom Pain is likely to an unintended side effect of this spatial structure interruption. The back-mounted ring structure also serves as a movable thruster, it can be separated and move according to the suit's need, granting the Stargazer exceptional mobility.

The black seams around the MS are capable of glowing and are a subsystem of the Voiture Lumiere. They are connected to the ring at the back and help to adjust the MS's thrust balance. The Stargazer also has a nanomachine repair system and does not have any weaponry as it is designed as a non-combat unit. However, it can use the beam pistol utilized by the UT-1D Civilian Astray DSSD Custom for self-defense.

A beam pistol designed by DSSD. It has a unique variable output system and focuses more on rate of fire rather than effective range or power. However, one of its shot still can destroy a MS when it hit the suit's vital places.

Designed as an exploration mobile suit, the Stargazer can be outfitted with a removable Artificial Intelligence unit in the area where usually the cockpit is placed. Surprisingly, the A.I is similar in structure to a human brain and can learn from recorded operational data of pilots. The end goal is to have the A.I take over the full control of the MS for the exploration mission.

Since the suit is designed for long journeys without any access to maintenance and/or repair facilities, the Stargazer is equipped with the nanomachine repair system. As its name suggests, maintenance and the repair of a certain degree of damage is carried out automatically by nano-sized machines.

The most important technological item on the Stargazer is the "Voiture Lumiere" (or "solar sail") interplanetary propulsion system, which uses the concept of catching and converting solar winds' energy to propel the suit. A power beam fired from a DSSD satellite, "Apollon A", can alternatively be used instead of the solar winds. The back-mounted ring captures these winds or the power beam with its thin curtain of light particles and uses a special conversion process to convert them into a strong light pressure which is then used as thrust. The system also allows Stargazer to build up speed over time as it travels between planets. Following Newton's laws of motion, the Stargazer will accelerate indefinitely as long as it keeps moving. Variants of the "Voiture Lumiere" system is utilized by the GSF-YAM01 Δ Astray, ZGMF-X20A Strike Freedom Gundam, ZGMF-X42S Destiny Gundam, MMF-JG73L Turn Δ and MBF-P02 Gundam Astray Red Frame Kai.

The Stargazer uses the advanced Guider UNmanned Deployment Autonomic Manipulation operation support system, created for space research purpose. However, its performance in combat situations is comparable to that of a combat MS's OS.

In late CE 73, the Deep Space Survey and Development Organization (DSSD) developed an advanced space exploration mobile suit, the Stargazer. As part of its exploration mission, the Stargazer was intended to be unmanned and controlled by Artificial Intelligence. This would allow the single mobile suit to reach the depths of the solar system beyond the already colonized Mars.

In October CE 73, the Stargazer was stationed at a DSSD station on Earth when terrorists dropped the remains of the Junius Seven PLANT on Earth, in an incident which is later known as "Break the World". The tidal surge caused by falling pieces engulfed a coastal city and threatened the DSSD station, but the Stargazer was safely launched into space. The development of the Stargazer continued with short-range tests of its "Voiture Lumiere" system at the DSSD Troya station.

Later, the Earth Alliance's secret Phantom Pain unit launched an attack on the DSSD station to seize the Stargazer's AI unit. To fend off the attack, DSSD researchers Selene McGriff and Sol Ryuune L'ange boarded the suit and sent the Stargazer into battle. Thanks to its ability to reflect beam weapon fire, the suit destroyed several of the Phantom Pain's GAT-01A2R 105 Slaughter Daggers, until it is confronted by Sven Cal Bayang and his GAT-X105E+AQM/E-X09S Strike Noir. The Stargazer again used its beam capture ability and created a field of shootable beam cutters around it, causing some damage to the Strike Noir. Selene then ejected Sol from the cockpit and used the satellite's power beam, to propel both the Stargazer and the Strike Noir out of the Earth Sphere in the vicinity of Venus. Afterward, Selene rescued Sven and used the last bit of the Strike Noir's energy to power the Stargazer for its long journey back to Earth. About 27 days and 21 hours later, the Stargazer reached the Earth Sphere and is found by Sol, both of its pilots having survived.

In hangar without backpack

Being loaded onto shuttle

Head (Side), with "Voiture Lumiere" activation effect at the back

Chest and head close up

Selene and Sven in cockpit 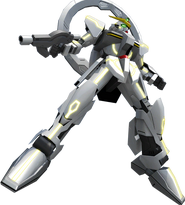 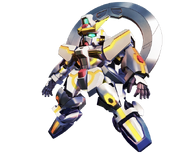