The GSX-40100 Lunagazer Gundam is a Gunpla from Gundam Build Fighters AR. It is built and piloted by Lady Kawaguchi.

By combining MSN-00100 Hyaku Shiki's light movable frame with GSX-401FW Stargazer Gundam's Voiture Lumiere, it has higher performance than either suit. With particle control system embedded throughout the body, Lunagazer Gundam is both nimble and fast.

The Lunagazer Gundam is equipped with a vulcan gun on each shoulder. While less powerful than its beam rifle, the vulcan guns can fire rapidly and are used to intercept missiles, etc.

Based on the Hyaku-Shiki's BR-M-87's beam rifle, but with a different barrel tip. It can use greater energy due to particle control.

A pair of beam sabers are stored on the rear waist armor. They seem to be of the same type as Hyaku-Shiki's beam sabers.

Carried over from the Stargazer Gundam, Lunagazer's back-mounted Voiture Lumiere System utilizes Plavsky particles for acceleration and can change enemy beam shots into energy. It also creates a ring of light that can be used for offensive purpose or to act as a shield. The system also transforms into wing binders for high speed travel.

Voiture Lumiere Subsystem is the particle control system embedded throughout the Lunagazer's entire body, its purpose is to achieve a perfect balance between control and thrust. When the subsystem is activated, the black lines on the Lunagazer's body glows.

This is the first Gunpla which Lady Kawaguchi built and used after Yajima Trading relaunched Gunpla Battle. The idea was to use mixed technology from the Universal Century and Cosmic Era. 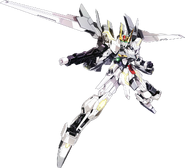