GSF-YAM02 Guardshell is a transformable mobile suit, it is featured in the manga series Mobile Suit Gundam SEED C.E. 73 Δ ASTRAY. The unit is piloted by Nahe Herschel.

The second mobile suit built by the Martian colonists, they developed the Guardshell themselves using technologies acquired from the GSF-YAM01 Δ Astray. The transformable Guardshell usually moves around in its Mobile Armor mode, the Tripod mode, which resembles the GSW-M02 Mars Tank, to conceal its true identity and its three legs can function as claws for picking up objects. When transforming into its Mobile Suit (MS) mode, parts of the Tripod mode is discarded; this transformation system is designed using the MBF-P02 Astray Red Frame Mars Jacket as a reference. The sole rear leg of the Tripod mode folds up on the back during MS mode, and can be used as a claw when required.

The Guardshell specializes in defense as it is developed to protect the attack oriented GSF-YAM01 Δ Astray; the two MS is designed to work in tandem to cover each other's weakness. When it transform from Tripod mode to MS mode, some of its defensive capabilities are traded for higher combat power. The Guardshell's weapons consists of a beam gun, a pair of laser rods, a physical shield known as 'Tri Saucer' that is equipped with beam shield, three laser swords and three rocket anchors. In Tripod mode, the Guardshell can only use the beam gun and beam shield. In MS mode,it has full access to all its weapon and the shield can even function as a yo-yo-like melee weapon.

A beam gun attached to a flexible, retractable cable, it is mounted in the front of the Guardshell's Tripod mode and in the center of the chest when in MS mode. The beam gun also functions as a sensor.

A close combat weapon stored in each of the MS mode's arms, the pair of laser rods look similar to the heat rods used by ZGMF-X2000 GOUF Ignited but their combat abilities are unknown. Usable only in MS mode.

A shield that is mounted on the top when in Tripod mode, and mounted on the arm or handheld in MS mode. Besides functioning as a physical shield, it can also generate a beam shield and has three laser swords as well as three rocket anchors. In MS mode, it can also be used as a throwing weapon or as a handheld yo-yo-like melee weapon when attached to the end of a laser rod.

A beam shield can be emitted from the Tri Saucer to block powerful attacks like the GAT-X303AA Rosso Aegis Gundam's "Scylla" beam cannon.

The triangular protrusions of the Tri Saucer are laser sword emitters, they can be detached and used as a handheld weapon. Usable only in MS mode.

The dark red parts of the Tri Saucer, which are positioned in between the base of the laser swords, are actually rocket anchors. Each rocket anchor is attached to a retractable wire and when in use, it is fired out and will open up to become a grappling claw. Usable only in MS mode.

A beam sword can be emitted when the rocket anchor opens up to become a grappling claw.

Created on Mars, the Guardshell is the personal mobile weapon of Nahe Herschel, who uses it on his journey around Earth. Nahe used the Guardshell during several encounters with the mobile suits of Phantom Pain. 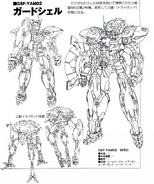 Retrieved from "https://gundam.fandom.com/wiki/GSF-YAM02_Guardshell?oldid=412516"
Community content is available under CC-BY-SA unless otherwise noted.