Built by the Martian colonists, the Delta Astray is also known as Mars's first mobile suit. It utilizes technology from Deep Space Survey and Development Organization and is developed with help from Junk Guild's Lowe Guele, who also gives the MS its name. It is assigned as the personal suit of Martian Coordinator Ergnes Brahe, who commands the interplanetary ship Acidalium. The Δ Astray has a simple armament of a beam rifle for ranged combat and a physical sword for close combat. Since Mars is not involved in the conflict between the Earth Alliance and ZAFT, there are no Neutron Jammers present there, allowing the Δ Astray to be powered by a nuclear reactor. However, when the ship visits the Earth Sphere in late CE 73, the Acidalium's crew has to install a Neutron Jammer Canceller on the suit.

The Delta Astray has a special OS that Lowe developed based upon the ones used by his MBF-P02 Gundam Astray Red Frame and YMF-X000A/H Dreadnought H, and the "Voiture Lumiere" propulsion system, which generate a visual effect known as the "Wings of Light" and increases its speed when activated. The Δ Astray has independent atmospheric flight capabilities and unknown to Ergnes, it is fitted with a self-destruct system to prevent others from learning about the martian's technological level. Although Lowe manages to repair the suit after it is heavily damaged in battle, it is no longer combat capable and thus Lowe adds an additional function to the Voiture Lumiere propulsion system, turning it into an energy transmitter for recharging the battery powered MMF-JG73L ∇ during battle.

For close combat, the Δ Astray is equipped with a physical sword that is stored within its sheath which is mounted on the left hip. This sword is capable of slicing through the VPS armored wing of Strike Noir.

A custom beam rifle created specifically for Δ Astray, and most likely has unlimited ammunition as it is powered by the suit's nuclear reactor.

A device built into the mobile suit to counter the effects of ZAFT's Neutron Jammers. It allows the Δ Astray to use its nuclear reactor in the earth sphere.

Like the ZGMF-X42S Destiny Gundam and ZGMF-X20A Strike Freedom Gundam, the Δ Astray is equipped with a combat variant of the "Voiture Lumiere" propulsion system. Unlike the Voiture Lumiere used by the GSX-401FW Stargazer Gundam, this combat variant uses an internal laser, instead of solar winds or an external power beam, and converts its energy into a strong light pressure which is then used as thrust. The system generates a light effect known as "Wings of Light" when activated, and also increased the suit's speed. However, for Δ Astray, a limiter has to be disabled before the system can be activated. When the suit is repaired by Lowe, he adds an energy transmitter function to the Voiture Lumiere, allowing the Δ Astray to transmit its energy to MMF-JG73L ∇, recharging the latter's battery and allowing it to use its "Voiture Lumiere" system at full power.

Although Δ Astray's OS is named "Generation Unsubdued Nuclear Drive Assault Module Complex", it is in fact a special OS developed by Lowe that inherits the human-like motion system from the Red Frame's OS and the nuclear reactor control system from Dreadnought H's OS.

Possibly the most notable trait of the Δ Astray is its self-destruct system, which is installed by the Martians to prevent others from learning of their technological level. The system causes the suit's reactor to automatically detonate if one tries to study its internal system. Because of this, the Acidalium's mechanic crews must be careful and brief when performing routine maintenance on the Δ Astray. The system is also supposed to activate if the Δ Astray suffers heavy damage or did not return to Mars as scheduled. The Acidalium will also self destruct if this system is activated.

Ergnes piloted the Δ Astray during his visit to the Earth Sphere in several battles both in space and on Earth. Eventually, the Δ Astray was crippled in battle against Sven Cal Bayang's GAT-X105E Strike Gundam E , but fortunately for Ergnes, the self-destruct system did not activate due to malfunctioning in the battle. Ergnes himself was not aware of this feature. Lowe then repaired the damaged suit and added an energy transmitter function to the "Voiture Lumiere", allowing the suit to recharge the MMF-JG73L ∇'s battery and to use its "Voiture Lumiere" system at full power. 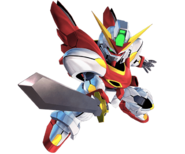 Retrieved from "https://gundam.fandom.com/wiki/GSF-YAM01_Δ_Astray?oldid=496992"
Community content is available under CC-BY-SA unless otherwise noted.