Being a Gunpla built only for simulation purposes, the GPB-X80 Beginning Gundam has a very unique design with 4 vents on its face plate and a beam like V-fin on its head. The Beginning Gundam and the GPB-X78-30 Forever Gundam are considered brother units. The Beginning Gundam utilizes the I-field-based propulsion system similar to SYSTEM ∀-99 (WD-M01) ∀ Gundam with various triangular-shape parts as I-Field emitters. This gives it exceptionally high mobility despite Haru not building it properly.

The Beginning Gundam's performance is much lower during the first Gunpla Battle; this is because Haru, being new to Gunpla building, assembled it without painting, and leaving details unfinished. It became much stronger after Haru rebuilt it with greater expertise. The Gunpla itself is armed with nine beam sabers for close combat. Six of these are stored in the backpack, and the other three stored behind its shield. Three of its beam sabers can be held in each hand in a claw-like fashion. The Beginning Gundam is also equipped with standard weapons like a beam rifle and shield.

Rather than standard vulcan guns, Beginning Gundam has beam vulcan guns which are in the form of a small blue rectangle on each side of the head. When in use, the Gundam's beam V-fin will dissipate.

A high energy beam rifle that can adjust its power output.

An oversized forearm worn over Beginning Gundam's right arm. It was designed by Takeru Nekki for a particular battle, and can be launched as a Rocket Punch.

the Beginning Gundam propels itself using I-Field instead of regular thrusters. The I-Field is generated by triangular-shaped parts mounted all over the Gunpla's body. This gives it exceptional high mobility and can deflect beam attacks.

In 2009, after seeing the 1/1 scale RX-78-2 Gundam at Odaiba, Haru Irei wanted to buy a model of the Gundam, but ended up buying the Beginning Gundam instead after it fell off a shelf. The model was apparently one-of-a-kind, being unavailable for purchase in any other channel.[1]

Upon completing it, he goes on to pilot it in simulation Gunpla Battles. In its first battle, it faced a team consisting of an RX-93-ν2 Hi-ν Gundam, an MS-05L Zaku I Sniper Type, and an AMX-107 Bawoo. At the start of the battle, it easily evaded the Zaku Sniper's shots and incapacitated it with return fire from its beam rifle. Shortly after, one of Haru's teammates in a Dom engaged the Bawoo while the Hi-v itself joined battle against the Beginning. The Beginning Gundam's left arm was destroyed by the Hi-v's funnels, displaying its polycap construction, before it fell into a building, temporarily incapacitated. Haru managed to reactivate the Beginning, using its head-mounted vulcans to open fire on the Bawoo. Then, he quickly demonstrated the effectiveness of the Beginning's triple beam sabers against a single beam saber, destroying the Bawoo outright in close combat. The Hi-v reappeared and faced the Beginning in an intense beam saber battle, culminating in the Hi-v being thrown into a field of netting. Entangled in the netting, the Hi-v could not move its limbs nor deploy its funnels, and thus could not prevent Haru delivering the final blow by stabbing three beam sabers into its torso.

Haru has barely a few moments to savor his victory before Boris Schauer appears in his GPB-X78-30 Forever Gundam and challenges Haru to a one-on-one fight. Easily defeated by the more experienced Gunpla Meister, Boris comments on the Gunpla's poor build quality.

Takeshi Iori (Sei's father in disguise) recommended and forced Reiji to get a GBP-X80 Beginning Gundam Gunpla in order to learn how a Gunpla is built. Thanks to the advice from Takeshi and his tools, Reiji was able to make the Gundam with exceptional quality. It was later used alongside Aila's Command Gundam to defeat Gunpla Mafia C. Subsequently, Reiji uses the Beginning Gundam as his backup Gunpla should the Star Build Strike or Build Gundam Mk-II be unavailable. Reiji later uses the Beginning Gundam to interfere in the match between Aila and Fellini after Aila loses control due to the Embody system. The Gunpla is easily destroyed by the Qubeley Papillon. During the festival, Reiji uses a repaired Beginning Gundam against Sei's Build Gundam Mk II. 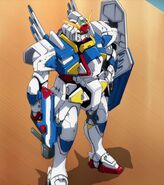