The GPB-X80-30F Beginning 30 Gundam is an upgraded version of the original GPB-X80 Beginning Gundam featured in Model Suit Gunpla Builders Beginning G. It is piloted by Haru Irei.

An improved version of the Beginning Gundam's beam rifle, due to enhancement by the attached IFS units, its firepower is increased and its output can be adjusted. It is capable of launching a powerful energy whip-like attack that can destroy several enemy simultaneously, and can fire a powerful beam cannon-like blast.

The Beginning 30 Gundam is armed with a total of 15 beam sabers, 6 on its backpack, 6 on its waist and 3 on its shield. They can be used in a claw-like fashion when the suit holds three sabers in one hand. The 6 beam sabers stored on the waist has the unique ability to emit beam blades from both ends of the handle, and can also function as remote weapons, where they can spin and cut through enemies like flying buzzsaws.

Rather than standard vulcan guns, Beginning 30 Gundam has beam vulcan guns which are in the form of a small blue rectangle on each side of the head. When in use, the Gundam's beam V-fin will dissipate.

The same shield as used by the Beginning Gundam, it stores three beam sabers.

I-Field control System unit. The Beginning 30 houses 20 of these units. These devices greatly enhance Beginning 30's I-field propulsion system and allow it to manipulate its I-Field for both offensive and defensive purposes. The Beginning 30 can also detach these units, using them as remote weapons, they can be used to create a protective I-Field around a friendly unit. The IFS-produced I-Fields take the unusual form of a stream of green bubbles which form the Beginning 30's wings, rifle blasts, shields, and other IFS-related constructs.

The Beginning 30 Gundam first appeared when it saved Kenta and Rina from Koji's RX-93-ν2 Hi-ν Gundam, Haru easily defeated Koji, shortly after, Boris appeared and started attacking Haru, while Rina holds off the Kampfer with the GPB-04B Beargguy's Beam eyes. Kenta eventually defeats the RX-79BD-1 GM Blue Destiny Unit 1 with his funnels. Both Haru and Boris were finally giving everything they got to win their final battle and finishes it with a clash of beam sabers. The Beginning 30 appears in a collection of Gunpla along with Boris's GPB-X78-30 Forever Gundam, Kenta's MSN-04 Sazabi, and Rina's Bear Acguy. The series end with Haru, now a Gunpla Meister, along with Kenta and Rina, talking with two children admiring their custom Gunpla. 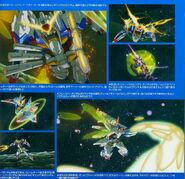 Vs. Forever Gundam
Add a photo to this gallery

Retrieved from "https://gundam.fandom.com/wiki/GPB-X80-30F_Beginning_30_Gundam?oldid=496089"
Community content is available under CC-BY-SA unless otherwise noted.