The GPB-06F Super Custom Zaku F2000 is a custom variant of the original MS-06F2 Zaku II F2 Type. It is featured in the anime Model Suit Gunpla Builders Beginning G OVA. It was piloted by Gunpla builder Tatsu Shimano. The name F2000 is a pun, meaning "1000 times stronger than F2 type".

The Super Zaku Custom F2000 is a heavily armored version of the HGUC Zaku II F2 Type, being equipped with molded armor parts to increase it defensive capabilities. This however greatly reduced the suit's performance in space combat as the armor is considered heavy and sometimes unreliable in some situations. To compensate for the heavy equipment, additional boosters were equipped onto the mobile suit to make it a bit more mobile.

The suit is equipped with almost the same weaponry as the F2 Type, only having different appearances than its predecessors. The Super Zaku Custom also has two extra arms located on the backpack to hold other weaponry.

Since the custom parts were added to basic Zaku F2 kits using scratch build method, the connection between the armor and kit is rather weak and will fall apart, as evidenced after the Zaku F2000 suffered from a heavy attack.

Carried by a sub arm on this unit's backpack.[4]

Carried by a sub arm on this unit's backpack.[5]

A long heat hawk that is carried in both hands and used like a polearm. In the hands of a berserk pilot like Tatsu Shimano, it is capable of wreaking great havoc. Is considered the main weapon of the suit.[6]

Mounted on the left hand of the suit. Uses the same drum magazines as the MMP-78 Machine Gun.[8]

According to the backstory thought of by Tatsu, the Super Custom Zaku F2000 was so-named because it was 1000 times stronger than the MS-06F2 Zaku II F2 Type (untested). It was input with every type of martial art, tactics, and combat pattern in the world, and it was said that magicians and shamans were part of its development team. Because of its high production cost, only a single prototype unit was produced, and it was sealed at the deepest level of the Axis for being too powerful.[9]

After Kenta and Haru suit up and launch from the Argama into a space colony, the duo are attacked by Tatsu in his GPB-06F Super Zaku Custom F2000. Tatsu bombards the two with heavy fire, and manages chop off the legs of Kenta's Hyaku Shiki colorfully called the Byaku Shiki. In the real world, both Boris and the manager are observing the battle with great interest. During the battle, Haru notices that Tatsu's fast movements are causing the armor to crack on the Zaku. Kenta then fires the Hyaku Shiki's clay bazooka at the Zaku, resulting in its resin armor breaking off. Haru takes the opportunity and charges at Tatsu, winning the match. 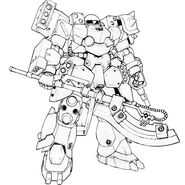 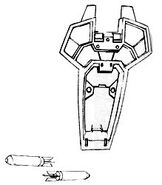 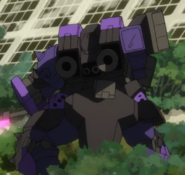 Losing part of its armor 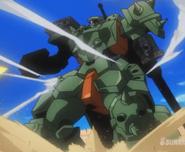 Retrieved from "https://gundam.fandom.com/wiki/GPB-06F_Super_Custom_Zaku_F2000?oldid=497936"
Community content is available under CC-BY-SA unless otherwise noted.