The GPB-04B Beargguy is a Gunpla variation of the MSM-04 Acguy, it appears in the Model Suit Gunpla Builders Beginning G OVA. It is piloted by Rina Noyama.

An anthropomorphic bear with a red knapsack unit on its back, the Beargguy is a modified version of the MSM-04 Acguy. Its weaponry consists of a mega particle cannon mounted in its right forearm, two mega particle cannons in the eyes, six tube missile launchers in each arm, six missiles in its knapsack, and a ranged beam weaponry known as beam recorder that is stored on the side of the knapsack. The Beargguy's arms can be extended to increase striking distance, and the suit can somehow hold the beam recorder with its paws.

The Beargguy's most unique ranged beam weaponry, the beam recorder is stored on the left side of the knapsack and handheld when in use. To use the beam recorder, the suit has to hold the weapon and 'blow' with its mouth, this will release a beam shot from the other end of the weapon.

The Knapsack Unit is a special backpack developed for the Beargguy, it resembles a schoolgirl's backpack. The unit stores six missiles, and can hold the beam recorder on the left side.

The GPB-04B Beargguy was first created as a simple redecoration - Rina had built a normal Acguy and placed a bear hoodie over its head and placed a plastic fish in its claws. Haru and Kenta later helped in modifying the Acguy model kit into an actual Beargguy. Rina, along with Kenta in his white Sazabi, were forced to launch without Haru in the Gunpla Battlers Championship, where she find out her Beargguy was not meant for space combat, making her a liability. The Beargguy and Sazabi were rescued from the reappearance of the Hi-Nu Gundam by Haru and the completed Beginning 30 Gundam. When Boris Schauer and his assistants Diana Lee and Sam arrive to challenge Haru and his friends, Rina challenges Diana and her MS-18E Kämpfer. Her unconventional weaponry takes Diana off-guard as the Beargguy's Mega Particle Cannon (Eye) nearly destroys the Kampfer.

Beargguy about to use its beam recorder 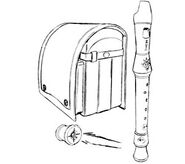