The technical data of the GN Drives are regarded by Celestial Being as one of their most important and valuable secrets. In order to prevent exploitation, most of its data was kept within Veda at its highest security level and is impossible to steal directly.[3] Regardless, the Corner Family obtained the information through sending an investigation team that visited the satellite Europa, where the team found a Haro that contained data of the GN Drives.[3]. In the early stages of development, the focus was on complete replication of the GN Drives.[3] This was to the point where even the GNX-603T GN-X was built with specifications that catered towards their usage.[3] Their efforts on replicating the GN Drives was eventually abandoned since they were unable to produce the special cores needed and focus shifted to creation of the GN Drive Tau instead.[3]

GN Drive Taus (or pseudo solar furnaces) are imitations of the original GN Drives, and while they are able to perform the same functions as the latter, they are incapable of semi-perpetual energy generation or storage because they lack TD Blankets (the aforementioned special core),[3] a component relevant to GN Particles generation and utilization. The GN Particles produced from such drives disperse reddish-orange hues. The GN Particles produced by earlier GN Drive Taus are generally safe but have toxic cellular effects when utilized as beams, such as preventing the application of regeneration treatment to injury site. Louise Halevy and Lasse Aeon suffered from these toxic cellular defects, and they are caused by the particles' compression rate. By 2312, the particle compression rate was adjusted and as a result their beams are no longer toxic.[3] In addition, their output performance have been improved and can rival that of a 3rd Generation Gundam's original GN Drive.[3][4]

GN Drive Taus possess weaknesses that will always make them inferior to their genuine counterparts. Firstly, its average particle output rate is less than a GN Drive's, meaning that one-on-one, the performance of a GN Drive Tau will not be able to keep up with an original GN Drive. Another handicap of the GN Drive Tau is that it requires a special starter machine to charge and activate.[1][3][5] The only known exceptions to this are the Gundam Thrones, who possess their own onboard starter.[5] However, the biggest weakness of the GN Drive Tau is that it depends on electrical power to continuously generate GN particles and is not self-sufficient without recharging, meaning that it has a limited operational time compared to original GN Drive and, ironically, technologically-inferior, solar-powered mobile suits, such as the SVMS-01 Union Flag and AEU-09 AEU Enact, which are lower in terms of performance. These energy limitations also mean that their GN Condensers are only charged pre-sortie, further limiting the amount of particles they can access.[6] Because of these shortcomings, any machines powered by the GN Drive Taus will always have limitations against original GN Drives.[3] While original GN Drives are superior due to their perpetual operations, the GN Drive Taus are easier to produce, and this trait is utilized by high output mobiles armors which are powered by multiple GN Drive Taus.[3]

GN Drive Tau machines can be broadly classified into two categories: Hybrid and Stand Alone. Hybrid types have a separate battery to provide additional power supply to the machine's electrical driving force as the output of their GN Drive Tau is insufficient.[7] This also requires adding electrical supply links inside the machines' body in addition to the existing GN Particle channels, which may lead to an increase in the machines' size.[6] Stand Alone types by contrast have their electrical driving force powered solely by the GN Drive Tau.[7] Currently, the only confirmed Hybrid type machines are the Ahead series, while the only confirmed Stand Alone units are machines made approximately in 2314, which have GN Drive Taus with further improved output.[7]

The initial GN Drive Taus did not have a Trans-Am system. Trans-Am was a secret system built into the black-box of the original five GN Drives. The data for it could not be found in Veda, thus it was not part of the schematics given to Laguna Harvey (by Ribbons Almark). In 2312, Billy Katagiri analysed notes left behind by Ralph Eifman in his home and discovered the secret to the Trans-Am system and incorporated it into Mr. Bushido's new mobile suit, GNX-U02X Masurao. Billy Katagiri and the Innovators developed their Pseudo Trans-Am systems separately.[8] Billy's self developed system however was inferior and he went to work on the GNZ-004 Gaga for the Innovators in order to obtain their perfect system, which was directly copied from Celestial Being's data.[9] The system was not mass-produced at that time and used by only a handful of A-Laws/Innovators mobile suits. One large flaw of the Pseudo Trans-Am system is that it will cause the Pseudo Solar Furnace to be heavily damaged, rendering it unusable. The mobile suit will then function solely on its remaining Condenser supply [10][11] By 2314, the system is considered standard equipment on GN Drive Tau suits and even larger Tau ships. It is unknown whether the Drives are still heavily damaged after Trans-Am or whether they have been improved to nullify this.

The Twin Drive System is the use of two GN Drives to produce GN particles in synchronous particle generation (two drives acting as one). It is an experimental GN Drive system used by the Fourth Generation GN-0000 00 Gundam, which was initially the only unit of its kind to support such a system. The system's data would later be stolen by Anew Returner and then implemented on the CB-0000G/C Reborns Gundam[12], which sported a pair of GN Drive Taus. It should be noted though that Reborn's Pseudo Twin Drive output, while impressive, cannot match that of an original GN Drive version.[12][4] The GN Drive Taus still produce particles at a limited rate and would possess other weaknesses that applies to GN Drive Taus: heavy damage to the Drive after Trans-Am is used and limited operational time. However, one advantage of the Pseudo Twin Drive is that the system can be mass produced.[4] While the exact output of a Twin Drive using GN Drive Taus is not known, it has been determined that the total multiplier effect is less than squared of a single GN Drive Tau's output.[4]

After Laguna Harvey completed building the three Gundam Thrones according to Alejandro Corner's instruction, the machines were given to Team Trinity for their aggressive armed interventions, which attacked even civilian operated military factories. The Thrones supremacy didn't last as Alejandro had other plans in mind.

Alejandro later provided information on the location of 30 GN Drive Taus mounted on GNX-603T GN-X units to the three power blocs.[2] This allowed them to fight more evenly against the Gundams as they now had mobile suits equipped with the same type of beam weapons and had the same type of maneuvering capabilities as the Gundams. Although it was quickly determined that in a one-on-one fight the Gundams were still superior, their larger numbers helped to equalize this weakness.

Four years later, approximately 328 countries had united to form the Earth Sphere Federation and had developed the means to mass-produce the GN Drive Tau.

To further the Federation's agenda of unifying independent nations, the army had placed GN particle dispensers across the Middle East to choke the nations' economies. However, the side effect of this is that the bases of the anti-federation forces, Katharon, are undetectable.

As the Autonomous Peacekeeping Force of the Federation, the A-Laws were given nothing but the best. Their forces were outfitted with the new GNX-609T GN-XIII and later with the more advanced GNX-704T Ahead, both machines were equipped with a newer and more efficient version of the GN Drive Tau. Thanks to their support from the government and private funding, such as from Louise Halevy, the A-Laws were able to go further in GN Drive Tau and associated mobile weapon development. This lead to the development of new units such as the aquatic mobile armor GNMA-04B11 Trilobite, which was equipped with three GN Drive Taus, and the GNX-U02X Masurao, the first Federation/A-Laws built mobile suit with a Trans-Am System.

The Innovators, led by Ribbons Almark and backed by Veda, developed their own series of GN Drive Tau-equipped mobile weapons that are more advanced than the Ahead. Using data stolen by Anew Returner from Celestial Being, the Innovators incorporated the Trans-Am System and even build a suit with a Twin-Drive System similar to GN-0000 00 Gundam. 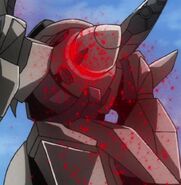