A GN Condenser (also known as GN Capacitor or GN Particle Tank) is a GN Particles capacitor in Mobile Suit Gundam 00 used to aid in the distribution of energy and fuel for mobile suits and their weapons.

A GN Condenser holds onto excess GN Particles for the mobile suit to fuel various functions within its frame without the need to redirect GN Particles from other systems. The material itself has been not clearly defined, and the material(s) that GN Condensers are composed of have never been properly identified. This highly durable material can be weaponized, capable of retaining intense heat and generating beam energy. Celestial Being was able to perfect said weaponization with the development of the GN-0000/7S 00 Gundam Seven Sword. The data from this unit would later be used to create a new generation of solid GN Particle blade weapons that could both cut through objects with even greater efficiency and be used to either generate a beam saber or simulate beam fire. GN Condensers can be divided into 2 different sub-classes: the "Frame-Type" variant and the "Drive-Type" variant.

The first and most common are the numerous, miniature condensers that are distributed throughout a GN Drive-type mobile suit's body. They typically appear as orb-shaped devices, and are used to supply power to different sections of the suit and keep an excess amount of GN Particles stored for future use. Because the supply of GN Particles a GN Drive can provide at any given time is limited, the Drive alone is not be able to provide the amount of particles needed to perform a specific function should it exceed the Drive's output rate.[1][2] With GN Condensers implemented, the stored GN Particles within these condensers can add to the overall particle supply available to the mobile suit. The orb-shaped condensers can also be used for communications purposes among friendly units[1], and while these condensers can appear in various colors, it should be noted that the colors do not denote whether the GN Particles is produced by an Original GN Drive, which is known to produce green particles, or by a GN Drive Tau, which is known to produce red or orange particles.

For "Original GN Drive" units, when the mobile suit is producing excess particles, such as when the mobile suit is on standby, the excess particles are redirected to the GN Condensers for storage.[2][1] GN Condensers of this type are also often integrated into the weapons of a mobile suit for a similar purpose.[3][4][5] These body condensers can also be used for communications purposes among friendly units.[1] While Tau Drive mobile suits also make use of GN Condensers, they are only charged beforehand at the base and not mid-sortie like Original Drive mobile suits.[6] Due to this, the amount of particles they can access is relatively more limited.[7] The reason why this is so is because their finite operational time limits the total amount of particles they can produce before running out of electricity reserves.[6] Original Drives on the other hand, can continuously recharge their GN Condensers without any risk due to their semi-perpetual nature.[6]

The other class of GN Condenser is the larger, high-capacity variant. These are usually used by Celestial Being to either act as an actual replacement of a GN Drive on both their older mobile suits (since they do not have any spare GN Drives), or as the primary energy source of support units such as the GNR-010 0 Raiser, GNR-101A GN Archer and even on ships like the CBS-70 Ptolemaios. One weakness of the Large GN Condenser is that it possess inferior operational time relative to Tau Drives,[8][9] which store energy in the form of electricity before conversion to GN Particles.[6][7] While these large GN Condensers are usually used as GN Drive substitutes, they are sometimes used to further enhance particle capacity of mobile suits who already possess GN Drive powerplants. Examples of suits that utilize this include the Brave Test Types as well as one of optional setups for the GN-XIV. In cases such as 00 Gundam Seven Sword/G, the large condensers were used in existing GN Drive chassis designs, whereas in cases like 0 Gundam A.C.D. and Exia Repair III, a new unique chassis design was used instead.

GN Power Lines (aka GN Cables[10], GN Particle Supply Cords) is one method implemented in GN Drive based mobile suits to distribute GN Particles within their own bodies among the GN Drive, GN Condensers, and other equipment. These large purple cables are easily recognizable due to being visible from the outside. When Trans-Am is used, the cables would light up in a deep red color compared to the rest of the mobile suit.[11][12][13][14] These exposed cables are actually weakpoints of the Gundams, though the mass manipulation ability of an exposed particle cable can greatly improve mobility.[1] Gundam Exia makes extensive use of this concept by having more exposed cables than its three brethren units and as a result, contributes to its superior mobility at the cost of defense.[1] Starting in 2312, Celestial Being internalized the cables within the armor of their new machines[15] as well as upgrades of existing machine like the Exia Repair II.[1][16] The advantages of the new system include being less vulnerable to attacks as well as being easier to maintain.[15]

An alternative method of distributing GN Particles within a mobile suit's body, here the particles flow directly within the machine's frame structure.[17] This type is confirmed to be utilized by the Gundam Thrones and the GN-X series.[17][18] Since many Tau Drive suits are related to the Thrones genealogical wise, they might also have inherited this system, though information to confirm this is absent.

Aside from mobile weapons, GN Condensers are also used as the main power source for A-Laws' automatons.[4] The handgun that Ali used to shoot Setsuna in Krugis also appeared to have GN Particle residue and effects though it's unknown whether it makes use of a GN Condenser in any capacity. By 2364, new-generation space suits appear to be equipped with parts that resemble GN Condensers, though it is unconfirmed at this point whether they are or aren't GN Condensers. 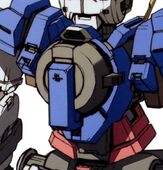