After the Earth Sphere Federation took over the Celestial Being colony ship, the Gagas that were left drifting in space around Celestial Being were modified into GNZ-004/BW Gaga Cannons. The Gaga Cannons are equipped with GN Vulcans on the chests and GN Cannons on their back. Because these were designed for Innovades, they were assigned to pilot these.

In addition to the cannons, their color scheme was altered into ESF colors via nanomachines.[1] This was not only to identify allies with ease, but the original color reminded many Federation pilots of their enemies fought during the previous decisive battle.[1] Even though the ELS may be able to shape shift into these Gagas, their resultant metal color will still be distinct from the Federation's color scheme.

Two GN Cannons attached to the back. The GN Cannons are smaller, lighter, and have greater firing succession rates than its GN Vulcans.

After the battle against the Innovators, the ESF found 100 Gaga units remaining on the Celestial Being colony ship, as well as several more drifting in space.[1] During the battle with the ELS, because their kamikaze attacks are useless against the ELS, who can fuse with metal, they were fitted with GN Cannons as weapons.[1]

These hundred Gagas made up Earth's last defense line, and not many of them returned when the battle ended.[1] It has been recounted that some of these Gaga Cannons helped save some GNX-803T GN-XIVs from being destroyed by the ELS.[1] 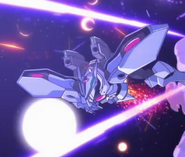 Gaga Cannon as seen in the Gundam 00: A Wakening of the Trailblazer Movie heading into Battle against the ELS. 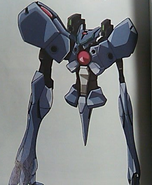 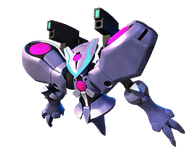 Retrieved from "https://gundam.fandom.com/wiki/GNZ-004/BW_Gaga_Cannon?oldid=449920"
Community content is available under CC-BY-SA unless otherwise noted.