As implied by its model number, the Gundam Plutone is the last of the four 2nd generation Gundams developed by Krung Thep based on the GN-000 0 Gundam.[1][2] Despite this, it is actually the third unit to be assembled and tested.[3] It is also notable that Veda classified some of its system designs as highly confidential information, and even Krung Thep’s members are not aware of its full capabilities.[3] Data collected from the Gundam Plutone are used in creating the Gundam Artemie, Gundam Nadleeh, Gundam Virtue.[2][4][5] A special feature of the Plutone is that when it enters hibernation mode, the suit’s unique leg joints drop due to power supply to the joints being cut, and this alters the suit’s height.[1] As of 2292 AD, Plutone is also the only other Gundam beside 0 Gundam to have mouth vents.[3]

The performance and capabilities required of the Celestial Being’s mobile suits are vastly different from those used by other countries’ military.[3] To accomplish huge achievements on the battlefield with limited units, it is necessary for Celestial Being’s machines to have extremely high offense and defense power.[3] The Gundams realized this via the use of GN Particles, resulting in the equipping of beam weaponry, and the development of the GN Field which has high defensive capabilities.[3] Although the GN Feld technology is present on the 0 Gundam’s shield, the outer spherical barrier version famously deployed by the Gundam Virtue first appeared on the Gundam Plutone.[4][6]

Through the GN Field generation devices (mostly in the form of yellow, round parts) installed all over Plutone’s body, a huge amount of GN Particles are released and used to form a visible, spherical GN Field that encases the suit.[3] Unfortunately, tests showed that the Plutone’s GN Field is more unstable than expected due to being easily affected by external conditions.[3][5] Faced with this issue, the Krung Thep team activated the ‘Second Plan’ - GN Composite armor, which consists of deploying a GN Field in the limited interior space of the suit’s armor.[1][3][5] Despite this plan’s success in generating a stable GN Field, the external GN Field generation system is not removed from the suit’s system as there are plans to improve it.[1][3][5]

When the Plutone is inactive, the GN Particles produce by the semi-perpetual GN Drive is stored in a large GN Condenser mounted on back of the Plutone’s waist.[1][3][4][7] In this manner, the suit has access to large amount of energy immediately upon activation, and this also helps to meet the huge GN particle consumption when deploying the GN Field.[1][3][7] During the early stages, Krung Thep engineer thought of equipping the Plutone with a Twin Drive System that utilizes 2 GN Drives.[3] However, the engineers soon realized that synchronizing the two GN Drives is technically too difficult, and abandoned the concept, terminating the plan.[3] More than a decade later, the concept is revived by the organization and equipped on the GN-0000 00 Gundam after a theory/design of such a system made by their founder, Aeolia Schenberg, is discovered.[8]

To achieve Celestial Being’s goal of eliminating conflict through armed interventions, there are two critical factors – the GN Drives and the Gundam Meisters.[3][9] The GN Drives are the core and the source of the Gundams’ outstanding performance, and there are only 5 units, with no plans to build more to reduce the risk that their secrets would leak out.[3][9] Furthermore, the GN drives are very hard to produce and losing them can spell the organization’s doom.[3] Thus, it is crucial that none is lost.[3] With this in mind, all Gundams (current and future) are designed to be able to easily eject their GN Drive during emergency for the safe recovery of this important component.[3] As for the Gundam Meisters, finding capable mobile suit pilots who agree with the organization’s ideology and have the required skills as well as experiences is extremely difficult.[9] This makes them as important as the GN Drives, and hence a need to enhance their survivability during combat.[3] To fulfill these two needs, the Plutone is equipped with a Core Fighter that is designed to ensure the recovery of its GN Drive and Gundam Meister.[3][5][9][10]

The Core Fighter is a small, transformable flight unit that contains the Plutone’s cockpit, a pair of clavicle antennae for manipulating dispersed GN Particles, and the GN Drive.[3][9] During an emergency, the Core Fighter ejects from the suit’s torso and flies away from the combat zone.[3][9][10][11] A flaw with the Core Fighter is its lack of combat capabilities.[3][5][9][10] Although creating an escape unit with combat capabilities is the development team’s end goal, it is somewhat contradictory.[3] It essentially meant that the escape unit needs to have abilities close to that of a mobile suit and must be fitted within a mobile suit.[3] This concept eventually evolved into the Gundam Nadleeh.[12]

The suit’s name is derived from the planet, Pluto, which is associated with the tarot card, Judgment, and this continues the trend of the 2nd generation Gundams having tarot card related name.[1][4][5] The Judgment card also carries the meaning of ‘Rebirth’ and ‘Change’, and thus many within Celestial Being perceived the suit’s name as a reference to its Core Fighter.[1][13] Unbeknownst to the organization’s members, Veda had named the suit ‘Plutone’ because it plans to add the anti-treachery Trial System onto the machine in the future.[3][12] This system takes control of machines within a certain range that are linked to Veda, and is created to prevent betrayal by pilots controlling GN Drive powered mobile suits. This plan to install and test the Trial System is eventually dropped as Veda deemed the Plutone’s designated Gundam Meister, Chall Acustica as being unsuitable for the task.[12] Testing of the Trial System is later attempted on the Gundam Artemie, but it fall through due to pilot-related issues again, and finally succeeded with the Gundam Nadleeh.[12]

The Plutone does not have a main camera on its forehead, and this is due to it having a composite sensor in the black part on the chest.[4] Like the GNY-001 Gundam Astraea and GNY-002 Gundam Sadalsuud, Plutone uses a three thruster design for the back cover of its GN Drive, which grants higher propulsion power and maximum GN Drive performance, but at the cost of higher stress on the drive itself and thus lack stability.[3] Despite having a GN Drive, Plutone cannot use the Trans-Am System as it is not unlocked till 2308 AD. After completing their missions, Plutone and the other 2nd generation Gundams were not dismantled.[14] They were placed on standby during the development of the 3rd generation Gundams, and eventually transferred to the Fereshte, a shadow support team to the primary Ptolemaios team.[14] Due to Chall’s recommendation, use of the Plutone by Fereshte is avoided as much as possible, thus it does not have an upgraded Type F version or a Sensor Mask like the other 2nd generation Gundams.[7][15]

The Plutone is destroyed in 2307 AD, but a replica known as the GNY-004B Gundam Plutone Black is later created alongside replicas of other Type F machines by the Innovators for their own purposes.[11][16][17] Ex-Fereshte’s members Fon Spaak and Hanayo eventually acquired these machines and by 2312 AD, they had them repainted in the Fereshte's colors and also had the Fereshte’s ID.[18][2]

The Plutone uses a GN Beam Rifle as its main range weapon. Like the GNY-001 Gundam Astraea's, Plutone's GN Beam Rifle fires high energy GN Particles, and receives power from the suit via connecting to a forearm socket during use.[4] Has a sensor mounted below the rifle's barrel.[4] Serves as the predecessor of Gundam Nadleeh's GN Beam Rifle.[7]

While many countries were racing to create close combat weaponry with energy blade, Celestial Being had accomplished the feat through the use of GN Particles.[14] The GN Beam Saber’s cutting power is superior than the Union’s and AEU’s Sonic Blade as well as Plasma Sword.[14] Although the saber’s blade is made of pure energy, it can cross swords with solid blades as it incorporated technology that prevents repulsive diffusion of GN Particles.[14] A GN Beam Saber is stored in each of the Plutone's knees, and slides out when deployed.[4] This storage method is inherited by Gundam Nadleeh.[5]

Due to the GN Field's heavy consumption of GN Particles, the Plutone cannot deploy it too frequently.[4][5] Thus, it also carries a GN Shield on its left forearm.[4][5] Made of E-Carbon, the shield is capable of blocking most physical and beam attacks. Serves as the predecessor of Gundam Nadleeh's GN Shield.[7]

The Plutone is the first Gundam to be equipped with a Core Fighter - a small, transformable aircraft operable in the atmosphere and space.[3][11][19] It contains the Plutone’s cockpit, GN Drive, clavicle antennae and primary propulsion system.[9] As a result, it has the same level of GN Particles dispersal capabilities as a Gundam, and is also quite mobile and agile.[9] The unit’s black canopy contains a composite sensor, while the cockpit is located at the aircraft's bottom.[4][9][20][21] To fit into the Plutone’s body, the Core Fighter folds into a block-like configuration.[5][9] During emergency, the Core Fighter exits the Plutone’s torso through the back of the mobile suit, unfolds into its aircraft-like form and flies away from the combat zone.[3][9][11] The Core Fighter's weakness is its lack of weaponry due to its small size.[3][9][12] Despite this, its name has the word ‘fighter' as the development team had plans to arm it to ensure survivability during escape.[9] For unknown reasons, these plans are never realized and the Core Fighter is not equipped onto the 3rd generation Gundams, as it is perceived to have limited usability.[20] The concept evolves into the Gundam Nadleeh, with the Core Fighter making a return in the Innovators’ GNZ series of mobile suits as well as the GNW-20000 Arche Gundam.[12]

A characteristic ability of the Plutone is that it can deploy a visible, spherical GN Field that encases the entire Gundam, creating a 360 degree protective barrier.[3][5] This is unlike the invisible GN Field deployed on the surface of the 0 Gundam’s shield.[6] The GN Field is formed via GN Particles released from the GN Field generation devices located all over the Plutone’s body.[3][5] In light of safety concerns, early testing of the Plutone’s GN Field are conducted with the Core Fighter removed, and the suit is powered by GN Particles fed from an external source via cables.[3] These tests showed that the GN Field is more unstable than expected due to being easily affected by external conditions.[3][5] Thus, the use of this system is suspended as the engineers work on improving its stability.[1][3] Eventually, a perfected system is installed on the Gundam Virtue. Fon's second Plutone can also generate a stable GN Field as it inherited the perfected system from the Gundam Plutone Black.

Created as a backup plan for the GN Field, the GN Composite Armor consists of generating a GN Field in the limited space within the suit’s armor.[1][3] This design allows the generation of a stable GN Field, granting the suit high defensive capabilities, but it cannot protect exposed parts of the MS, like the sensors, etc.[1][3][5] When attacked, the outer layer of the GN Composite armor will be destroyed or damaged, but the GN Field will protect the inner armor layer.[1]

When the Plutone is transferred to Fereshte, a docking port for Hanayo (a unique Haro-type robot) is fitted in the cockpit.[22] This allows Hanayo to assist Fereshte's Gundam Meister, Fon Spaak, during missions.

During the original Plutone’s last battle in 2307 AD, Gundam Meister 874 activated its self-destruction system to enable an injured Fon and her to escape from the battle with Team Trinity.[11] Plutone’s Core Fighter is ejected prior to the explosion.[11] It is unknown when this system is installed.

Note: For the history of Plutone in 00P, go to Chall Acustica's page. For its brief history in 00F, please visit Fon Spaak's page. 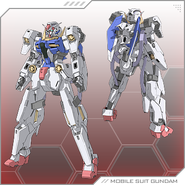 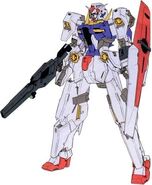 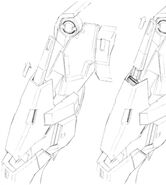 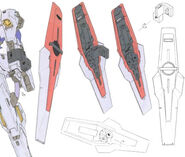 Plutone with three of the 2nd generation Gundam Meisters