The Gundam Artemie is the successor prototype of the GNY-004 Gundam Plutone and is classified as a 3rd generation Gundam.[1][2] Development codename ‘Gundam 874’, it is developed in 2302 AD for Gundam Meister 874, an Innovade and 2nd generation Gundam Meister who is supposed to become one of the 3rd generation Gundam Meisters participating in the organization’s armed interventions.[3][4][5] Artemie is powered by the GN Drive from the GN-XXX Gundam Rasiel.[4] Unlike other Gundams, Artemie’s GN Drive is not installed in the torso near the cockpit, instead it is in a separate module behind the waist that resembles a bee’s abdomen.[4][6][7] Although not visible on its exterior, Artemie has numerous GN Condensers mounted internally.[4]

The Artemie is armed with a GN Beam Spray Gun as its main firearm, and four GN Bits, which are remote controlled beam weapons for multi-vector assault.[5][7][8] These GN Bits also provide Artemie with additional thrust while stored on the suit’s back.[7] Despite having a GN Drive, Artemie is unable to use Trans-Am System as it is not unlocked till 2308 AD. The main feature of the Artemie is the anti-treachery Trial System, which can exert control over all machines linked with Veda.[7][9] To extend the effective range of the Trial System, a pair of blade antennae are added onto the GN Beam Spray Gun.[5][7]

Originally, the Trial System is to be tested on GNY-004 Gundam Plutone, but the plan is terminated without any testing as the suit’s pilot, Chall Acustica, is deemed unsuitable for the task.[9] A new plan is then conceived to have the system installed on a Gundam used by 874, who is deeply trusted by Veda.[9] However, this plan is dropped midway when 874 rejected her physical body.[9] 874 is a unique Innovade, she exists only in data form.[3][4] As her entire data is too massive to store onboard the Gundam, she needs constant link with Veda to control the machine.[4] However, during combat, this data link may be severed.[4] To avoid this risk, Veda prepared a physical body for her.[4]

Thus, 874’s rejection of her physical body also meant her removal from the armed intervention team, and the cancellation of her Gundam, which is about 90% complete when its development is halted.[4][5][9] Subsequently, the GN-004 Gundam Nadleeh is created as Artemie’s replacement.[5][9] Both suits are not only alike in having the Trial System; they also have similar mouth plate and red cables on the head, although both features on Artemie are hidden behind a mouth mask.[7][8]

All of Artemie’s parts are constructed prior to its development being halted, and because of this, Ian Vashti is able to assemble it for 874’s use when she decided to fight against Beside Pain.[4] To pilot her Gundam, 874 retake possession of her physical body from Agent 887, the new personality Veda created following 874’s rejection.[4] 874 is also responsible for the name ‘Artemie’.[4] With a few exceptions, a Gundam is usually named by Veda based on its capabilities and purposes, and is typically derived from myths or legends.[4] 874’s reasons for the name are as follows: the Gundam’s appearance resembles a bee, which is one of the symbols associated with the moon goddess Artemis, furthermore, a bee’s flight path tends to look like the number ‘8’, which is the first digit in 874 (the mind) and 887 (the body)’s names.[4][5]

After the battle with Beside Pain, the damaged Artemie is put into storage.[10] The suit’s data is later used to create the GN-004/te-A02 Gundam Nadleeh Akwos.[1] In 2312 AD, Sherilyn Hyde, one of the engineers involved in building the Artemie, decided to rebuild it into a transformable support mobile suit for the GN-007 Arios Gundam, resulting in the GNR-101A GN Archer.[1][2][10]

Also known as GN Spray Gun, it is Gundam Artemie's sole handheld shooting weapon.[5][7] The pair of blade antennae on the right side of the gun are positioned vertically when the Trial System is activated, extending the system’s effective range, and causing the gun to take on a bow-like form.[5][7]

Four GN Bits are stored on Artemie's back in a fashion similar to a bee's wings.[4][7] In battle, these remote weapons function as beam guns or emit beam sabers for all-range attacks. [7][8] They also serve as additional thrusters when mounted on the suit’s back.[7]

A system that allows the pilot to control a mobile weapon's remote weaponry.

A system used to take control of all machines linked to Veda, preventing their misuse or betrayal by their pilots.[9] The Trial System is available to only selected users and can be installed on more than one machine at the same time, as seen by both Artemie and Nadleeh having it in 2302 AD.[8] However, it can only be used by one user at any moment, with the user having the higher access right being able to override use of the system by another who has lower access right.[8]

While participating in the testing of the GN-XXX + GNR-000 Sefer Rasiel Form 5, Gundam Meister 874 was also simultaneously observing the testing of the Gundam Nadleeh by Tieria Erde. Both Tieria and Nadleeh had a special mission: to prevent betrayal using the Trial System. This information was a top secret in the organization. Trial System was supposed to be tested by Gundam Plutone, but it was not done due to Chall's suitability issue. The next plan was to have Veda's most trusted follower, 874, test the system. A Gundam with Trial System was created for her, but the plan was dropped when 874 rejected her physical body. Finally, Veda created Gundam Nadleeh and Tieria was selected as its Gundam Meister.

Following Grave Violento being mortally wounded by Hixar Fermi, who was under mind control by the enemy, 874 requested Ian to prepare Gundam 874. Ian replied that parts for her Gundam were completed, but they were not assembled as the suit's development was terminated. He also noted the assembly and adjustments would take months, and was shocked when 874 wanted it done the next day. Having known 874 for a long time, Ian knew there was a reason for her ridiculous request and promised to do what he could.

He then pointed out a problem: there was no GN Drive for the Gundam. He added that he could install a large GN Condenser, but due to the Gundam's heavy particle consumption, it would only sustain the Gundam for 30 minutes and that was without using beam weaponry. 874 told him to use GN-XXX Gundam Rasiel's GN Drive and Ian mentioned another problem, 874's physical body. 874 existed only in data form, and her data was too much to download onto a Gundam. Although she could control the Gundam through Veda, there was a risk that the connection could be severed during combat. To overcome this risk, a body was created for 874 when she was picked as a member of the armed intervention team. However, 874 rejected the body. Thus, she was removed from the armed intervention team and the development of her Gundam was terminated. 874 replied the problem was solved, and Ian thought he saw a bitter expression on her face.

After acquiring her body from Agent 887, 874 put on her pilot suit and met Ian, who immediately noted that he had to adjust the cockpit settings, as she was taller than expected. He reported that all preparations were completed and the only issue left was the Gundam's name. He found it inappropriate to keep calling it by its development code - Gundam 874. Veda usually named the Gundams after myths and legends based on their capabilities and purpose. “Gundam Artemie”, 874 replied in an instant. The machine’s silhouette resembled a bee, and through Veda's search on bee related myths, 874 came to know about Artemis, the Goddess of the Moon, who was symbolized by good harvest and the bee. Furthermore, a bee's flight path resembled the figure '8', and was suitable for the Gundam carrying 874’s mind and 887’s body. Ian then wondered where the enemy was, and 874 replied that the enemy would appear the instant she launched.

In space, 874 was grateful to Ian for preparing her Gundam in such a short amount of time. After a while, two CBY-077 GN Cannons appeared, they came out from the direction of the hangar 874 had left earlier on. 874 checked Veda’s mobile suit database for information on the two units, but failed to find any. Without information on the enemy MS performance, 874 decided to be cautious. The two GN Drive powered GN Cannons then attacked with their GN Long Cannons and maintained their distance from Gundam Artemie.

874 dodged the attacks, and launched her GN Bits in respond. She also activated the Trial System, stopping the two enemies. It was because of this feature 874 had decided to use Artemie instead of Rasiel. Despite disabling the enemies, 874 continued to be cautious. She then received a quantum brainwave praising her cautiousness, and her Trial System was soon cancelled as Tieria was using it elsewhere. Two users could not use the Trial system simultaneously; only the user with the higher access rights can maintain it. Tieria had higher access rights, as he was a member of the armed intervention team. 874 wondered if Tieria was the traitor, but the enemy clarified Tieria was just testing the Gundam Nadleeh as ordered by Veda, and then introduced himself as Beside Pain.

874 was angered when Beside Pain made light of Grave’s injuries, and rushed forward together with her Bits to attack the two GN Cannons. She felt victory was possible if she closed the distance with her enemies, and even if she were defeated, the damages she caused would help those that would arrive later. She was confident Joyce B. Moreno would treat Grave and with Ian's help, Grave would sortie later in the Raisel using the last GN Drive. Beside Pain labeled her thoughts illogical and said she was too emotional. He then revealed that the last GN Drive was with him, and uncloaked the CB-001 1 Gundam.

The 1 Gundam fired its GN Beam Rifle and shot off Artemie's mouth mask, revealing the red cables beneath. Despite her hopeless situation, 874 still raised Artemie's GN Beam Spray Gun. She felt everything would end if she lost hope; for her friends, she would never give up.

Artemie was slowly accumulating damage as 874 fought against three enemy machines, but she did not lose hope even though she viewed reinforcement was unlikely. Her calculations had shown her defeat to be 100% guaranteed. However, she fought on, as the statistics were no longer important. She was fighting for the future, just like her human comrades. Only those who persevered and did not give up could march towards the future. Beside Pain mocked her for trying so hard and shot at Artemie's cockpit.

Unlike the other Gundams, Artemie's GN Drive was located behind the waist, far from the cockpit. Thus, the attack would only disable the suit but not destroy its GN Drive. As the attack was about to hit, Sefer Rasiel arrived and blocked it using its GN Shield. 874 thought she was hallucinating, and muttered Raisel's name before slipping into unconsciousness as a sense of relief flooded her. Beside Pain and his 1 Gundam was then defeated by Sefer Rasiel, which was piloted by a dying Grave. The two GN Cannons also fell silent, as their Innovade pilots were seemingly controlled by Beside Pain.

2312 AD. Sherilyn Hyde was busy working on various upgrades for the Gundams when she came up with the idea to create a transformable support unit for Arios Gundam. She then remembered that the damaged Artemie was still in storage and decided to use it as the base unit to build Arios’ support machine. It was also revealed that Artemie was the first Gundam that Sherilyn participated in building. 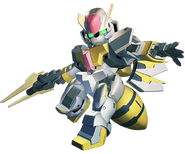 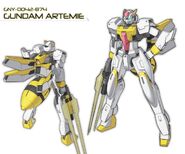 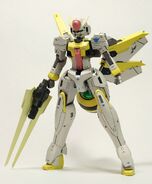 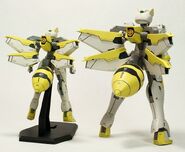 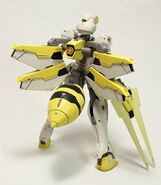 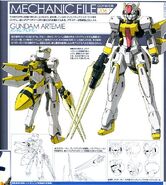 Retrieved from "https://gundam.fandom.com/wiki/GNY-0042-874_Gundam_Artemie?oldid=439269"
Community content is available under CC-BY-SA unless otherwise noted.