The Gundams can adapt to different environments without changing parts or equipment due to their use of GN Particles.[1] Such versatility is important as Celestial Being’s plan relies on limited machines to intervene in conflicts all over the world.[1] The use of GN Particles to control the Gundams’ maneuverability in aerial combat grants high stability, and allows them to maintain a standing pose while afloat, but it pales in certain aspects to the systems in conventional aircrafts.[1] A prime example is that the Gundams face difficulties in high speed flying in the atmosphere due to air resistance.[1] To solve this issue, the Celestial Being's Krung Thep engineering team developed the transformable, aerial combat specialized Gundam Abulhool.[1][2][3] Like the other 2nd generation Gundams, Abulhool was based on GN-000 0 Gundam.[4] Its name is derived from the Egyptian Arabic word for sphinx, ‘Abū al-Hawl’, and has a tarot card reference, a feature in all 2nd generation Gundams’ names.[5] In this case, it is the card known as ‘The Chariot’, which depicts two sphinxes pulling a chariot.[5]

Unlike the other 2nd generation Gundams, Abulhool was developed on Earth as its flight and transformation capabilities needed to be tested under gravity.[6][7] It can switch flexibly between its two forms, Flight Form and MS Form, depending on the situation.[1][7] Unlike the flight-type MS deployed in this era by the Union and AEU, Abulhool's transformation does not require switching parts in the base and it can transform even while flying.[7][8][9] Due to the focus on aerial combat capabilities and the incorporation of transformation mechanisms, Abulhool’s MS Form deviates from a humanoid shape.[1][5][7] Furthermore, the marked differences in dimensions of Abulhool’s two forms are not conducive for transportation and maintenance work.[1] Using the technology and data gained from developing the Abulhool, these flaws were rectified in its successor, the 3rd generation Gundam - GN-003 Gundam Kyrios.[1][7][10] Despite their differences, Kyrios and Abulhool have similarities including leg-mounted GN Verniers, and the rear covers of their GN Drives lack verniers or thrusters of any kind.[3][7]

The Abulhool’s Flight Form is also known as ‘Air Combat Form’, and like conventional aircraft, its structure takes air resistance into account .[1][7] A red and green light is also mounted on the tip of the left and right main wings respectively.[7] One of the suit’s unique features is that it has two heads.[1][3][7] The head located at the back, with a yellow blade antenna, is the sensor head.[5][7] Its face has a compound eye-like sensor, and the antenna functions like a clavicle antenna, which is important in controlling dispersed GN Particles.[1][3][7] The Abulhool’s main head is housed in the aircraft-like nose unit, and is normally retracted to reduce air resistance.[1][3][7] Due to its flexible neck joint, this main head can rise up or lower down, and then rotate left or right.[3][7] Its forehead has the suit’s main sensor, while its face has the Gundam's characteristic twin eye cameras, they are rarely seen due to being covered by a visor. [7]

The Abulhool has minimal firepower and all of its primary weapons are internalized to ensure smooth transformation.[7] Its main head has two GN Vulcans, while the pair of ‘Work Arms’ has a GN Beam Saber and a GN Beam Rifle each.[1][7] The Work Arms are small arm units with pincers hidden in the suit’s front skirt armor and usable only in MS Form.[1][7] Due to their size, the Work Arms have very limited uses.[1] Abulhool can also mount optional missile pods under its wings, and like the Gundam Kyrios, equipment can be attached to Abulhool’s back to grant it additional capabilities.[3][7][11] Although the MS Form is capable of AMBAC and aerodynamic controls that are not possible in Flight Form, its close combat capabilities remain low.[7][12] The real value of the Abulhool lies in its Flight Form.[7] Abulhool excels in high-speed movements, and despite its low firepower, its aerial combat capabilities are still superior to other flight-type MS of the same era thanks to its use of GN Particles.[2][13] The suit can also participate in aerial surveillance/monitoring; with the GN Particles’ ability to disrupt radar rendering it undetectable by the enemies.[2] Furthermore, the Flight Form can help conceal the fact that the suit is a Gundam.[12]

The last of Abulhool’s unique feature is that besides the GN Verniers, it also has hydrogen plasma jets in its leg, and the suit can switch between these two propulsion systems freely.[5][10] Although the Abulhool has a GN Drive in the center of its body, it is unable to use the Trans-Am System as this system remains locked until 2308 AD. After completing their missions, Abulhool and the other 2nd generation Gundams were not dismantled.[14] They were placed on standby during the development of the 3rd generation Gundams, and eventually transferred to Fereshte, a shadow support team to the primary Ptolemaios team.[7][14] With the exception of GNY-004 Gundam Plutone, the other three 2nd generation Gundams were upgraded by Fereshte, and Abulhool became GNY-003F Gundam Abulhool Type F.

Two GN Vulcans are mounted in Gundam Abulhool’s main head, which is revealed prior to firing the weapon.[2][7] The GN Vulcans rapid-fire weak beams made of GN Particles, but are strong enough to destroy AEU’s AEU-05/92 AEU Hellion Initium.[2][7] It serves as the Flight Form’s main weapon and is also usable in MS Form.[7]

While many countries were still attempting to create close combat weaponry with energy blade, Celestial Being had accomplished the feat through the use of GN Particles.[14] The GN Beam Saber’s cutting power is superior to the Union’s and AEU’s Sonic Blade as well as the Plasma Sword.[14] Although the saber’s blade is made of pure energy, it can cross swords with solid blades as it incorporated technology that prevents repulsive diffusion of GN Particles.[14] Abulhool can generate a GN Beam Saber from the tip of each Work Arm, and it is usable only in MS Form. [5][7]

A GN Beam Rifle is mounted in each Work Arm, and can be fired after the pincers on the arm units open.[7] Usable only in MS Form, its firepower is weaker than the handheld type GN Beam Rifle.[7]

A missile pod can be attached to the underside of each of the Abulhool’s wings.[7][11]

Custom-made units or equipment can be attached to the Abulhool’s back to grant it additional capabilities.[3][7] This is similar to the Gundam Kyrios’s ability to mount the Tail Unit.[7]

Development of the 2nd generation Gundams in space were completed, and Veda ordered the remaining development work to continue on Earth. One of these would be the testing of the Gundam Abulhool, which although designed in space was never tested there. Abulhool was a machine capable of transforming into Flight Form, and to test these functions, it was necessary for it to be developed on Earth.

Gundam Meister 874 and Ruido Resonance launched in the GNY-002 Gundam Sadalsuud and GNY-001 Gundam Astraea respectively to collect information about some submarine cables. Prior to the launch, 874 briefed all the 2nd generation Gundam Meisters on the mission, and she noted that they might encounter the AEU's Hellion Initiums. Since the enemies were flight-type MS, Marlene Vlady wondered if her Gundam Abulhool was ready, but was informed by 874 that it was still in the final adjustment stage. Ruido then assured Marlene that he and Astraea could handle aerial combat. In the aftermath of the battle with the Hellion Initiums, the 2nd generation Gundam Meisters met with Ian Vashti and Joyce Moreno, and recruited the two into Celestial Being.

A few weeks after arriving on Earth, the Gundam Abulhool was finally ready for testing. 874 brief the Gundam Meisters on the new mission; Marlene was to pilot the Abulhool and carry out surveillance on a team of Hellion Initiums that would be launching soon. Ian and Moreno were also present, and Ian was surprised that they know AEU's military activities ahead of time. Looking at the information presented, Moreno was troubled that AEU's target was a village belonging to guerrillas who were against the construction of the orbital elevator. If a battle were to occur there, non-combatants in the village would also be hurt.

Moreno asked Marlene to stop the attack, but she clarified that her mission was that of surveillance. For her to stop the attack would mean using the Gundam Abulhool to battle, and all who saw the Gundam would have to be silenced. Moreno pointed out that he's still alive, and Marlene responded that his and Ian's case were an exception, it was impossible to recruit all who had seen the Gundam into the organization. She then told him not to bother her further because she hated doctors. Moreno wanted to know why, but Marlene refused to answer. To her shock, Moreno lowered his head in apology on behalf of his fellow doctors who had done her any wrong.

The mission was proceeding smoothly, Abulhool was tailing the Hellion Initiums without them knowing, and the rest of Marlene's team was on stand-by near the village. However, as the Hellion Initiums approached the village, the Abulhool suddenly went closer and attacked them using its GN Vulcans. The battle was one-sided, but one of the damaged Hellion Initiums unexpectedly tried to crash into the village. Marlene blocked its path with the Abulhool. The Hellion Initium exploded upon collision, while the Abulhool suffered some damages. After the Abulhool landed, Marlene's team rushed over to get her out. She had sustained serious injuries, Moreno immediately treated her as the rest watched silently. Marlene pondered why she had done something so pointless; the village cannot be protected forever, AEU will soon dispatch another team to destroy it. To stop this, it was necessary to intervene in the conflict and change the world.

The four 2nd generation Gundams launched to stop terrorists from crashing dozens of Hellion Initiums onto the HRL’s Orbital Elevator. Unfortunately, the operation did not go as planned. The GNY-004 Gundam Plutone malfunctioned, its core fighter could not eject and energy level of the GN Particles released from Plutone was higher than expected, and this might cause the GN Drive to explode. Despite Chall Acustica's warnings, Ruido and Marlene still arrived in their Gundams to save her. In the end, Chall survived but with a huge scar on her left body and left eye. Her hair also turned white. Ruido and Marlene were bathed in a large quantity of GN Particles, and had presumably died instantly. GN particles are toxic under certain conditions. 874's Sadalsuud and the 0 Gundam (the latter launched under Veda's order and was piloted by an unknown pilot) recovered the Gundams and their GN Drives. The terrorist attack was neutralized, and talks were held between HRL and AEU.

Chall proposed to Veda a shadow team that would support the primary armed intervention team. Her plan was approved, and the four 2nd generation Gundams and the 0 Gundam were later transferred to this team. Amongst the five Gundams, only 0 Gundam still had its GN Drive, the others had their GN Drives used in the 3rd generation Gundams. Thus, during missions, Chall's new team could only use one Gundam powered by 0 Gundam's GN Drive. With the exception of GNY-004 Gundam Plutone, the 2nd generation Gundams were also enhanced, with the Abulhool upgraded into the GNY-003F Gundam Abulhool Type F. 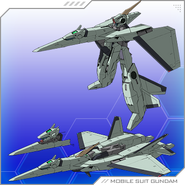 Close Up of Main Head

Retrieved from "https://gundam.fandom.com/wiki/GNY-003_Gundam_Abulhool?oldid=496074"
Community content is available under CC-BY-SA unless otherwise noted.