Gundam Abulhool's fighter mode resembles to a F-22 Raptor, fast and highly maneuverable. Abulhool alone has only GN Vulcans for dog-fighting, but it can carry missile pods (seen in the manga). The nose of its fighter form has head for visual sensors. One feature that the Abulhool possesses that makes it unique among the Gundam units is that it has a secondary propulsion system that utilizes plasma jets instead of the standard GN vernier. This is likely a feature installed to help hide the fact that Abulhool is a Gundam when in fighter jet mode.

Abulhool's melee combat capabilities are limited to only kicks and relying on its weapon(s) packages for defense/offense. Abulhool is the only mobile unit with two heads. The chest area of Abulhool is also the nose in its fighter jet form, there the extra head can provide additional sensory data for the pilot to use.

These weapons are smaller cousins to the GN Beam weapon. Typically locations include head and wrist mounted system, both ensuring a wide field of fire. Purely secondary weapons, they are used to engage soft targets, and in a defensive capacity.

The Abulhool is capable of being equipped with the same three-tube GN missile launcher that Kyrios uses. The missile launchers are mounted to the underside of the wings.

Some time afterwards, Black Abulhool was salvaged and repaired by Fon for his own uses and was given the Fereshte's paint scheme. 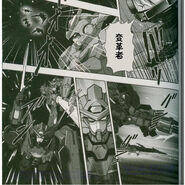