The Gundam Sadalsuud is the second of the four 2nd generation Gundams, all based on the GN-000 0 Gundam, to be developed by Celestial Being engineers at Krung Thep.[1] In battle, firepower alone is not sufficient to guarantee victory, gathering intelligence is equally important.[1] For this reason, Sadalsuud’s design focused on sensing functions, as they are the means to gather intelligence.[1] It has a variety of sensors (e.g. E-sensors) mounted all over its body, with the most prominent ones being the round, green sensors mounted on the suit’s knees, left chest, forehead and on the pair of shoulder-mounted Sensor Shields.[1]

Taking into account the mobility of a humanoid machine, most of Sadalsuud’s sensors are on the front, with only two rear sensors located on the pair of rear waist thruster units.[1] The low amount of rear sensors is because it is difficult to find locations unaffected by the GN Particles released from the torso-mounted GN Drive, which is used for propelling the suit.[1] The rear waist thruster units have diverting fins to prevent their own exhaust GN Particles from affecting the sensors.[1] To compensate for any blind spots, the Sadalsuud can use its arm movement to ensure the Sensor Shields are facing the right directions.[1] However, it is still not possible to have sensors looking at all directions simultaneously.[1] The engineers are currently working on integrating all the data from the various sensors, and making adjustments so that the arms can move and have the Sensor Shields immediately pointing in the required directions.[1]

The almost excessive amount of sensors on Sadalsuud is possible only because it is a test machine, this design is not viable for live combat.[1] As it is not meant for combat, Sadalsuud’s offensive and defensive capabilities are minimal.[1][2] It does not even have the minimal level of body armor required for a mobile suit, but the lack of armor improves the suit’s search capabilities by 30%, as there is reduced interference with the sensors.[1] Sadalsuud’s sole defensive equipment is the large Sensor Shield on the left shoulder, and this is because there is a need to test its shield functions.[1] The suit’s offensive weapons are limited to a Revolver Bazooka and a pair of GN Beam Sabers.[1][2] Despite not being designed for combat, Sadalsuud can play a role in gathering intelligence on the sidelines of battle or in a rescue role, and is more capable of underwater combat than the general purpose GNY-001 Gundam Astraea due in part to its Revolver Bazooka.[3][4][5]

Mobile Suits are conceived as mobile weapons capable of operating in any environment or situations.[1] This capability is especially important for Celestial Beings, which need to adapt to every possible situations with its limited number of MS, thus the performance requirements for their machines are exceptionally high.[1] Unsurprisingly, Sadalsuud and its sensors have been tested in every environment, and the suit has high resistance to water pressure in consideration for underwater usage.[1] The name ‘Sadalsuud’ itself is water related. It is the traditional name of Beta Aquarii, the brightest star in the Aquarius constellation, which is associated with the image of a water bearer.[6] The same image also appears on the tarot card known as ‘The Star’, and this continues the tarot card related naming style of the 2nd generation Gundams.[2][6]

Other unique features of the Sadalsuud include side skirt armor flexibly attached to the front skirt armor, and a pair of foldable head antennae.[1] These head antenna have a fixed blue portion and a foldable white portion.[1] The white portion is usually in a folded, stored configuration, and deployed after GN Particles are dispersed.[1] This deployed form allows the suit to function as a relay station between allied units and the home base.[1] Like the Astraea, Sadalsuud has a pair of clavical antennae near the neck for manipulating dispersed GN Particles, and uses a three thruster design for back cover of its GN Drive, which grants higher propulsion power and maximum GN Drive performance, but at the cost of higher stress on the drive itself and thus lack stability.[1][6] Despite having a GN Drive, Sadalsuud cannot use the Trans-Am System as it is not unlocked till 2308 AD.

Also known as ‘Revolve Bazooka’, it is the primary range armament of the Sadalsuud.[2] A rifle-like weapon that fires physical rounds, its ammunitions are contained in a revolving cylinder, and its function varies based on the type of munitions loaded.[2] The weapon’s main purpose is to test the ability of the aiming system to link up with the sensors.[2] A sensor is situated beneath the weapon's muzzle, while a rotatable secondary grip is located at the top surface.[2] Can be used for underwater combat.[4]

While many countries were still attempting to create close combat weaponry with energy blade, Celestial Being had accomplished the feat through the use of GN Particles.[8] The GN Beam Saber’s cutting power is superior than the Union’s and AEU’s Sonic Blade as well as Plasma Sword.[8] Although the saber’s blade is made of pure energy, it can cross swords with solid blades as it incorporated technology that prevents repulsive diffusion of GN Particles.[8] Two GN Beam Sabers are stored on the outer edges of the rear waist thrusters.

Not far from the Krung Thep space colony, Gundam Sadalsuud and its pilot, Gundam Meister 874 conducted a week-long mission, testing the use of the Sadalsuud for prolonged surveillance. Unlike other MS, the Gundams could function for long periods because of almost unlimited power supply from their GN Drives. But even then, the strain on the pilot cannot be ignored.

An unknown vessel approached the Krung Thep. 874 launched in Sadalsuud to gather intelligence on the vessel, while Ruido Resonance prepared to intercept in the GNY-001 Gundam Astraea. The Sadalsuud, with its enhanced sensor systems, played a very important role during the initial stage of such emergency. From the intelligence gathered by Sadalsuud, the vessel was identified as a HRL Battleship. 874 later relayed information from Veda to Ruido, which stated that the HRL battleship was manned by military deserters, and it was high likely that they plan to occupy Krung Thep, held it for ransom, and used the funds to go to a third country. Veda recommended the destruction of the vessel, and Ruido carried out the order. Destruction of the vessel was confirmed by 874, and emotionlessly, she conveyed that she and Sadalsuud would be analysing the wreckage and removing evidence of the battle.

874 and Ruido launched in the Sadalsuud and Astraea respectively to collect information about some submarine cables. During the mission, 874 detected a team of four AEU-05/92 AEU Hellion Initiums and Ruido intercepted them. After the battle, Sadalsuud detected an approaching ship and 874 wants to destroy it, but was stopped by Ruido, who did not want further deaths. To prevent Celestial Being's secrets from leaking out, Veda suggested recruiting the two people onboard the ship - AEU technician, Ian Vashti, and Doctor Without Borders, Joyce Moreno.

The four 2nd generation Gundams launched to stop terrorists from crashing dozens of Hellion Initiums onto the HRL’s Orbital Elevator. Sadalsuud’s role is to collect information during the operation, and help recover the Gundams in an emergency. Unfortunately, the operation did not go as planned. The GNY-004 Gundam Plutone malfunctioned, its core fighter could not eject and energy level of the GN Particles released from Plutone was higher than expected, and this might cause the GN Drive to explode. Ruido and Marlene Vlady gave up their lifes to save Plutone’s Gundam Meister, Chall Acustica. Sadalsuud and GN-000 0 Gundam (the latter launched under Veda's order and was piloted by an unknown pilot) recovered the 3 Gundams and their GN Drives.

Chall proposed to Veda a shadow team that would support the primary armed intervention team. Her plan was approved, and the four 2nd generation Gundams and the 0 Gundam were later transferred to this team. Amongst the five Gundams, only 0 Gundam still had its GN Drive, the others had their GN Drives used in the 3rd generation Gundams. Thus, during missions, Chall's new team could only use one Gundam powered by 0 Gundam's GN Drive. With the exception of GNY-004 Gundam Plutone, the 2nd generation Gundams were also enhanced, with the Gundam Sadalsuud upgraded into the GNY-002F Gundam Sadalsuud Type F. 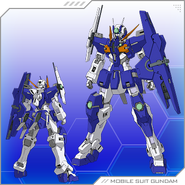 Retrieved from "https://gundam.fandom.com/wiki/GNY-002_Gundam_Sadalsuud?oldid=496070"
Community content is available under CC-BY-SA unless otherwise noted.