Years after completing their purposes, the GNY-001 Gundam Astraea and the other 2nd generation Gundams were transferred to Fereshte, a shadow support team to the primary Ptolemaios team, and upgraded for their use with the exception of the GNY-004 Gundam Plutone.[1][2][3] The Gundam Astraea Type F (the 'F' is a reference to Fereshte) is the upgraded form of Astraea and has a new paint scheme of red with maroon and brown highlights.[1][2][3][4]

With the know-how from developing the 3rd generation Gundams being feedback into the upgrade process, the Gundam Astraea Type F's performance is comparable to the newer Gundams even though it is a 15-year-old machine as the original Astraea was built in AD 2292.[3] The Astraea Type F is also fitted with a removable Sensor Mask that enhance its sensing capabilities and to prevent others from recognizing it as a Gundam.[1][2][3][5] The second role of the Sensor Mask is particularly important, as no one should know there are other Gundams beside the Ptolemaios team's.[1][2][3][5] In line with hiding its Gundam identity, use of GN Particles by the Astraea Type F is also restricted.[5]

The Astraea Type F is a general-purpose machine like original Astraea, and retains all of the latter's features.[1][3][6][7] It is worth noting that the suit's three-thruster cover for its GN Drive also facilitates ease of changing the GN Drive within, which is helpful to the Fereshte who only has one GN Drive, courtesy of the GN-000 0 Gundam that was also transferred to the team.[3][8] Since Fereshte must switch the GN Drive amongst its Gundams, it can only deploy one machine at a time.[3][9]

In AD 2311, a GN Drive Tau-powered replica known as the GNY-001FB Gundam Astraea Type F Black was created alongside other replicas of Fereshte's Gundams (except 0 Gundam and Astraea Type F2) by the Innovators for their own purposes.[1][12][13] By AD 2312, these replicas were in the hands of ex-Fereshte members Fon Spaak and Hanayo, who repainted them in the Fereshte's colors and also gave them the same designations as Fereshte's machines, thereby creating a second Astraea Type F.[1][13][14][15]

Same weapon as used by Gundam Astraea, it is a particle beam gun that shoots out high energy GN Particles.[1][3] The GN Beam Rifle has high particle consumption, and receives power from the suit via connecting to a forearm socket during use.[1][3] Due to the forearm connector being movable, the GN Beam Rifle can remain attached to the forearm while the Astraea Type F has other weapon in its hand like the GN Beam Saber.[19] When not in use, GN Particles are frequently stored in the rifle's internal GN condenser, and this allows rapid firing when the weapon is deployed.[1][3] The second Astraea Type F, which is converted from the Type F Black, can store the GN Beam Rifle on either hips when not in use.[1][17]

The same close combat weapon as used by Gundam Astraea, a pair are stored on the Astraea Type F's rear waist.[1][3] Although the GN Beam Saber's blade is made of pure energy, it can cross swords with solid blades as it incorporated technology that prevents repulsive diffusion of GN Particles.[1][3] Has superior cutting power than the Union's and AEU's Sonic Blade as well as Plasma Sword.[1][3]

Same prototype weapon as used by Gundam Astraea, it is a large physical blade enveloped in GN Particles, and has properties of both a beam saber and a solid sword.[1][3] Due to its large size, it was designed to be foldable so as not to be a hindrance when not in use. [1][3]

Same weapon as used by Gundam Astraea, it is a firearm that is directly linked to the GN Drive after attaching to the area near the neck upon the removal of a clavicle antenna.[1][3] However, the loss of a clavicle antenna will cause Astraea Type F's particle control ability to deteriorate.[3] It has substantial firepower among the Gundams' portable weaponry, and two of these weapons can be equipped at a time, creating the 'Double GN Launcher'.[1][3] It can also be used without connecting to the GN Drive, by sourcing particles from its internal GN Condenser, but this will reduce output and limits number of shots.[1]

Same shield as used Gundam Astraea, it is made of durable E-Carbon.[1][3] The armor on Astraea Type F's body is also made of the same material, but the GN Shield is better at absorbing shocks from attack due to being attached to the forearm and thus maneuverable.[1][3] In addition, GN Particles are coated on the shield's surface.[1][3] This not only improves the shield's anti-beam capabilities, but can also magnetize physical projectiles, redirecting their destructive power along the shield's surface.[1][3]

Mounted on each of Astraea Type F's forearms, the pair of GN Vulcans fire weak beams.[1] Capable of being rapid fired continuously, they are mainly used for restraining the enemy's movement and the likes.[1] However, they are a threat to mobile weapons without E-Carbon armor.[1] It is unclear if this weapon is present on the original and second Astraea Type F, or only on the latter.

Used by the second Astraea Type F, which is converted from the Type F Black, it is Fon Spaak's favorite weapon.[15][16] Designed by Hanayo, then refined and manufactured by Sherilyn Hyde, the GN Hammer is a spiked ball attached to a grip unit via a flexible, retractable cable.[1][15][18][20] Its spike ball houses a GN Condenser, and by using the GN Particles' mass manipulation ability, the impact upon hitting the target can be boosted.[1][16][20]

Even if the GN Hammer cannot shatter the enemy's armor, the impact can be strong enough to cause concussion or even loss of consciousness despite the enemy pilot wearing a seatbelt.[20] However, none of the current mainstream MS have armor thick enough to withstand a blow from the GN Hammer.[20] Furthermore, the GN Hammer's spikes are made of the new materials used in the blades of GN-0000/7S 00 Gundam Seven Sword's GN Katar and GN-0000+GNR-010 00 Raiser's GN Sword III, and can release GN Particles into the target's body when it hits, causing damages from the inside like the GN Missiles.[1][15][20]

The four GN verniers at the back of the spiked ball serve to accelerate the weapon when launched, and its trajectory can be controlled via signal from the grip unit, allowing for unexpected movements.[15][20] The weapon's cable can also be used to grapple enemy unit, restricting their movements, etc.[16] Overall, the GN Hammer is designed to inflict the greatest damage possible while keeping its GN Particle consumption minimal.[1][18] The GN Hammer’s GN Condenser is recharged when the weapon is stored on the side of the hips.[15]

The first 'N' in its name stands for 'No', and as implied, it is a non-GN Particle firearm.[1] Developed by the Earth Sphere Federation Forces (ESF Forces), it is for used in battlefields where particle disruptions are employed.[1] Used by the second Astraea Type F, Fon obtained this disposable weapon by raiding ESF Forces' bases.[1][15][16][17] Depending on the cartridge used, the NGN Bazooka can fire various projectiles including particle disruption shells, GN Missiles, or even beam shots despite its designation.[1][16][21][22] Each cartridge contains 6-7 physical projectiles.[22][23]

A small beam gun developed for GN-002 Gundam Dynames' use.[1] It has low firepower, but capable of rapid fire and consumes little particles.[1] It is stored in dedicated holster, which allows it to be utilized by other Gundams.[1] Fon acquired this weapon by looting the Fereshte's secret bases, which contained various equipment the team had recovered from Celestial Being's secret bases immediately after the latter's defeat in AD 2308 to prevent their recovery by the UN Forces.[1][24] The Astraea Type F Full Weapon carries two GN Beam Pistols stored in their holsters that are mounted on the suit's leg hardpoints.[1][15]

Used by the second Astraea Type F, it is an optional, versatile, large missile launcher for Gundams.[1][15][25][26] This is the same armament as used by GN-003 Gundam Kyrios during the assault on Human Reform League's Super Human Research Institute.[1][15][25][27] Consisting of three triple launch tubes, each GN Hand Missile carries nine missiles and it is said that the weapon can be loaded with GN Missiles as well as conventional explosive warheads.[25][28][29][30] It can be mounted on the hardpoints of the second Astraea Type F's legs and forearms, or handheld.[1][15][26][28] Acquired by Fon in the same manner as the GN Beam Pistols, and discarded after use.[1][15][16][17]

A system hidden in the blackbox of the original GN Drives made by Celestial Being, its existence was revealed in AD 2308 following Aeolia Schenberg's death at the hands of a betrayer.[10][31] When activated, all of the compressed high-density GN Particles accumulated in the Gundam are fully released, enhancing its thrust and defensive capabilities as well as boosting its output by threefold for a limited time.[31] The Gundam glows red as a side effect and afterimages are also generated during movements.[31] However, this system is a double-edged sword, as once it ended, the Gundam's performance will drop dramatically as most of the GN Particles in its body have been used up.[31] This negative effect lasts until the stored GN Particles within the Gundam return to normal level. The second Astraea Type F, which is converted from the Astraea Type F Black, does not have this system as it is powered by the GN Drive Tau.

Attached to the Astraea Type F's face to hide its Gundam identity, ensuring that no one knows the existence of Gundams besides those used by the Ptolemaios team.[1][2][3][5] This removable mask also has sensor functions as implied by its name, and thus improves the suit's sensing capabilities.[1][3][7] When the Sensor Mask is damaged and detaches during combat, the Astraea Type F will kill everyone on the battlefield to protect its secret.[3][5] The second Astraea Type F used by Fon has no need to hide its Gundam Identity, but it still uses the Sensor Mask to enhance its sensor capabilities.[1]

The operating system of the Gundams is linked to Veda, allowing the quantum computer to provide support to the Gundams and their pilots. As suggested by Ian Vashti, Fereshte severed their links to Veda when it is evident that Celestial Being's plans were being compromised, and Sherilyn replaced the Veda-linked Operating System used in Fereshte's Gundams with a copy of the Ptolemaios team's stand-alone operation system.[10] Without support from Veda, piloting the Gundams and completing missions will be tougher for the pilots.[32] Unknown what operating system is used in Fon’s second Astraea Type F.

A docking port for Hanayo (a unique Haro-type robot) is fitted in the Astraea Type F's cockpit.[9] This allows Hanayo to assist Fereshte's Gundam Meister, Fon Spaak, during missions. Also present in Fon's second Astraea Type F, and it can be fitted with a normal Haro when needed.[17]

Go to Fon Spaak's page for the full history of the Astraea Type F. 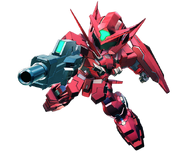 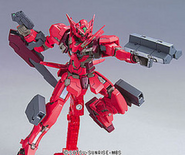 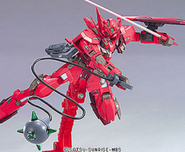 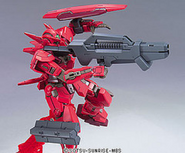 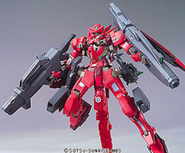