When the defeat of the Celestial Being by the United Nations Forces (UN Forces) seems imminent in AD 2308, the Fereshte team set out to recover equipment Celestial Being had in their secret supply bases to prevent them from falling into the enemy's hands, and to ensure resurrection of the organization.[1][2] After the UN Forces' victory, Fereshte's Gundam Meister, Fon Spaak instructed the use of the recovered equipment to enhance Fereshte's own Gundams.[3] As a result, the spare parts of the GN-001 Gundam Exia were used by Sherilyn Hyde to upgrade the Gundam Astraea Type F, creating the Gundam Astraea Type F2.[4][5][6][7]

Replacing some of the Astraea Type F's deteriorating parts, which have been in use since the machine started out as the GNY-001 Gundam Astraea 15 years prior, with new parts lead to considerable improvements in the suit's overall performance.[4][5][7][8] Additionally, the hardpoints on the forearms and legs of Astraea Type F are replaced by spare GN Condensers from Exia, and the pair of new head antennae have GN Particle control capabilities like the two clavicle antennae.[5][6][7][8] With its four antennae setup, the Astraea Type F2's ability to control GN Particles is increased by more than 40%.[4][5][7][8] This not only gives it very precise control of GN Particles, but also remedies the issue with decreased particle control that the Astraea Type F faced when a clavicle antenna is removed to equip the GN Launcher.[7] The new head antennae however decreased the suit's communication capabilities, but Fon brushed it off as he always operates alone on the battlefield.[7]

The Astraea Type F2 has similar weaponry and access to Trans-Am System like the Astraea Type F.[9][10][11] It also has a new feature created by Sherilyn known as 'GN Reflection', which is usable when Trans-Am is activated.[12] GN Reflection allows the suit to deflect or bend beams at close range, but is extremely difficult to use.[12] When Fereshte rejoins the reborn Celestial Being in AD 2311, the team hands over their Gundams and the two GN Drives in their possession (one from the GN-000 0 Gundam, and the other is the GN Drive ejected by GN-003 Gundam Kyrios after its defeat).[1][4][12] The Astraea Type F2 is then retrofitted to run on a large GN Condenser, also known as a 'GN Particle Tank', like the 0 Gundam Type A.CD but without any changes in external appearance.[2][4][13]

Same weapon as used by Gundam Astraea Type F, it is a particle beam gun that shoots out high energy GN Particles.[4][5] The GN Beam Rifle has high particle consumption, and receives power from the suit via connecting to a forearm socket during use.[4][5] When not in use, GN Particles are frequently stored in the rifle's internal GN condenser, and this allows rapid firing when the weapon is deployed.[4][5]

The same close combat weapon as used by Gundam Astraea Type F, a pair are stored on the Astraea Type F2's rear waist.[4][5] Although the GN Beam Saber's blade is made of pure energy, it can cross swords with solid blades as it incorporated technology that prevents repulsive diffusion of GN Particles.[4][5] Has superior cutting power than the Union's and AEU's Sonic Blade as well as Plasma Sword.[4][5]

Same prototype weapon as used by Gundam Astraea Type F, it is a large physical blade enveloped in GN Particles, and has properties of both a beam saber and a solid sword.[4][5] Due to its large size, it was designed to be foldable so as not to be a hindrance when not in use. [4][5]

Same weapon as used by Gundam Astraea Type F, it is a firearm that is directly linked to the GN Drive after attaching to the area near the neck upon the removal of a clavicle antenna.[4][5] Due to Astraea Type F2's four GN Particle control antennae setup, the loss of one clavicle antenna does not affects its particle control capabilities much.[7] The GN launcher has substantial firepower among the Gundams' portable weaponry, and two of these weapons can be equipped at a time, creating the 'Double GN Launcher'.[4][5] It can also be used without connecting to the GN Drive, by sourcing particles from its internal GN Condenser, but this will reduce output and limits number of shots.[4]

Same shield as used Gundam Astraea Type F, it is made of durable E-Carbon.[4][5] The armor on Astraea Type F'2s body is also made of the same material, but the GN Shield is better at absorbing shocks from attack due to being attached to the forearm and thus maneuverable.[4][5] In addition, GN Particles are coated on the shield's surface.[4][5] This not only improves the shield's anti-beam capabilities, but can also magnetize physical projectiles, redirecting their destructive power along the shield's surface.[4][5]

A weapon meant for the second GNY-001F Gundam Astraea Type F, which is converted from the GNY-001FB Gundam Astraea Type F Black.[14] It is designed by Hanayo, then refined and manufactured by Sherilyn Hyde, and finally tested by the Astraea Type F2 piloted by Eco Calore.[14] The GN Hammer is a spiked ball attached to a grip unit via a flexible, retractable cable.[4][14][15][13] Its spike ball houses a GN Condenser, and by using the GN Particles' mass manipulation ability, the impact upon hitting the target can be boosted by increasing the weapon's weight.[4][14][16]

Even if the GN Hammer cannot shatter the enemy's armor, the impact can be strong enough to cause concussion or even loss of consciousness despite the enemy pilot wearing a seatbelt.[14] However, none of the current mainstream MS have armor thick enough to withstand a single blow by the GN Hammer.[14] Furthermore, the GN Hammer's spikes are made of the new materials used in the blades of GN-0000/7S 00 Gundam Seven Sword's GN Katar and GN-0000+GNR-010 00 Raiser's GN Sword III, and can release GN Particles into the target's body when it hits, causing damages from the inside like the GN Missiles.[4][14][15]

The four GN verniers at the back of the spiked ball serve to accelerate the weapon when launched, and its trajectory can be controlled via signals from the grip unit, allowing for unexpected movements.[14][15] The weapon's cable can also be used to grapple enemy unit, restricting their movements, etc.[16] Overall, the GN Hammer is designed to inflict the greatest damage possible while keeping its GN Particle consumption minimal.[4][13]

Developed by Sherilyn exclusively for Astraea Type F2, the GN Reflection allows the pilot to manipulate the GN Particles surrounding the mobile suit during Trans-Am, and thereby deflects or bends the enemy's beam attacks away, be it a beam shot or the blade of a GN Beam Saber.[12] The GN Reflection also allows the Astraea Type F2 to overcome an enemy’s planar GN Field by seemingly bending the blade of the Gundam's own GN Beam Saber over the edge of the GN Field, allowing it to strike the enemy mobile suit behind.[9][17][18] The new head antennae are involved in the control of the GN Reflection.[17][18] The flaw of the GN Reflection is that it is extremely difficult to use; it can only manipulate a limited number of particles at a time and its usage requires extremely precise timing.[12] Thus, using GN Reflection can be risky, and the deflected/bent enemy beam attack can end up damaging another part of the mobile suit.[12] As a result, normal pilots would never use it.[12] 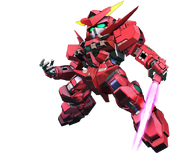 Retrieved from "https://gundam.fandom.com/wiki/GNY-001F2_Gundam_Astraea_Type_F2?oldid=496064"
Community content is available under CC-BY-SA unless otherwise noted.