The GNY-001F/hs-A01D Gundam Avalanche Astraea Type F' is Fon Spaak's GN Drive Tau-powered GNY-001F Gundam Astraea Type F equipped with the Avalanche Unit and Dash Unit from the GN-001/hs-A01D Gundam Avalanche Exia'.[1][2][3] The Avalanche Unit and Dash Unit are jointly known as "Avalanche Dash Unit", and they were among the equipment Fon looted from the reborn Celestial Being's storage facilities; some of these facilities originally belonged to the now defunct support team, Fereshte, which had recovered and kept Celestial Being's equipment when the organization collapsed in AD 2308.[2][4][5] The Avalanche Dash Unit are fitted with large GN Condensers, and their stored GN Particles can be discharged through verniers for a brief period of heightened mobility.[1][2]

Thanks to new condenser technology developed around the time of the Dash Unit's creation, the Avalanche Dash Unit's GN Condensers have higher performance, with reduced charging time and longer usage time.[2] The Dash Unit is also armed with two GN Claws that can emit GN Beam Sabers.[3][6] As the Avalanche Dash Unit is not made for Astraea Type F, some parts are forcibly attached or modified for attachment onto the machine, while others, like the additional front skirt armor are not used at all.[1][2] Nevertheless, the fitted parts still improved the machine's mobility and drastically increased its high-speed movement capabilities in space.[1][2] These parts are recolored to match Astraea Type F's colors and can be purged when not needed.[1][2][3] Sections of the Avalanche Dash Unit can be unfolded for "High Mobility Mode" and "High Speed Mode".

A pair of claws mounted in the tips of the leg-mounted Dash Unit, they unfold when in use.[3][6] During close combat, a GN Field can be deployed to increase the GN Claws' destructive power.[6] Furthermore, a GN Beam Saber can be emitted from each claw's center.[3][6]

Same GN Hammer as used by Fon's Astraea Type F.[3] It is a spiked ball attached to a grip unit via a flexible, retractable cable. The spike ball houses a GN Condenser, and by using the GN Particles' mass manipulation ability, the impact upon hitting the target can be boosted. Even if the GN Hammer cannot shatter the enemy's armor, the impact can be strong enough to cause concussion or loss of consciousness despite the enemy pilot wearing a seatbelt. However, none of the current mainstream mobile suits have armor thick enough to withstand a blow by the GN Hammer.

Furthermore, the GN Hammer's spikes can release GN Particles into the target's body upon contact, causing damages from the inside. The four GN Verniers at the back of the spiked ball serve to accelerate the weapon when launched, and its trajectory can be controlled via signal from the grip unit, allowing for unexpected movements. The weapon's cable can also be used to grapple enemy unit, restricting their movements, etc. Overall, the GN Hammer is designed to inflict the greatest damage possible while keeping its GN Particle consumption minimal. The GN Hammer's GN Condenser is recharged when the weapon is stored on the side of the hips.

The Avalanche Astraea Type F' uses the Exia's GN Sword instead of the Astraea Type F's Proto GN Sword, as the GN Sword has better compatibility with the forearm-mounted parts of the Avalanche Unit.[1] The GN Sword is carried on the right forearm and repainted to match Astraea Type F's colors.[1][2] The GN Sword's blade has a GN Particle coating for higher cutting capabilities during use; the blade is usable even if the coating function is switched off. Despite its high destructive power, the blade's large size makes it unwieldy in narrow areas. By folding the blade down, the GN Sword switches to Rifle mode and functions as a beam rifle.

Same GN Shield as used by Fon's Astraea Type F.[3] It is made of durable E-Carbon with GN Particles coated on the surface, which not only improves the shield's anti-beam capabilities, but can also magnetize physical projectiles, redirecting their destructive power along the shield's surface.

Like Fon's Astraea Type F, the Avalanche Astraea Type F' can attach a Sensor Mask to its face.[1][2] This removable mask has sensor functions as implied by its name, thus improving the suit's sensing capabilities.

Fon launched in the Avalanche Astraea Type F' to investigate an abnormal energy flow from the orbital elevator's solar power generating system to the moon's surface. Hanayo was against it as she felt it was a trap, but Fon still launched anyway as he wanted to confirm if it was indeed a trap.

Eco Calore was sent out in the GNY-001F2 Gundam Astraea Type F2 to retrieve equipment from a storage facility belonging to the now defunct Fereshte. These equipment were recovered by Fereshte from Celestial Being's bases during the organization's collapse in AD 2308. However the storage facility was empty, even the Avalanche and Dash Units were gone. When a bewildered Eco reported this to his superior, Chall Acustica, she quickly suspected that Fon had looted the place as the Avalanche and Dash Units could only be used by mobile suits related to Gundam Exia. 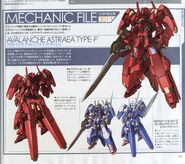