The GNX-Y901TW Susanowo (aka Susanowo) is the upgraded version of the GNX-U02X Masurao that appears in season two of Mobile Suit Gundam 00 and is piloted by Mr. Bushido.

The GNX-U02X Masurao was built and completed at a rapid pace, it was then further enhanced and remodeled as time was available, reborning as the GNX-Y901TW Susanowo.[1][2][3][4] The major differences that set the Susanowo apart from the Masurao are the equipping of a GN Condenser on the back, the mounting of a gauntlet on the left arm, a new built-in beam cannon called "Tri-Punisher", and the switch from beam-based GN Beam Sabers to the solid blade-type Enhanced Sabers.[1][2][5][6] The Susanowo also has another new weapon in the form of GN Claws mounted in the waist side binders, larger head antennas, and several parts of its body were painted in different colors from the Masurao's.[2][6][7][8] The model number, "GNX-Y901TW", was officially assigned to the Susanowo to reflect its status as the prototype machine of the ESF Forces' next mainstay mobile suit after the GNX-704T Ahead.[4][9]

The Susanowo also doubled as Mr. Bushido's custom machine, just like the Masurao, with its main weapons being a pair of Enhanced Sabers to match his preference for close combat.[2][6][10][11] Named "Shiranui" and "Uryu", these solid blade swords have the added ability to deploy beams on the surface of their blades, and can also combine into a twin-edged form called "Souten".[2][5][10][11] To ensure the stable use of these sabers, a special gauntlet was equipped on the left arm, which is the primary saber wielding arm.[2][6][7][8] Additionally, the GN Condenser on the Susanowo's back can supply power to the sabers through the power cable on the back of the mobile suit's head.[1][2][7] This GN Condenser is also said to have enabled the use of the Tri-Punisher, a large beam cannon with three muzzles, one hidden in the abdomen and two others in the shoulders.[2][3][6][11] While not ordered by Mr. Bushido, the Tri-Punisher allowed the Susanowo to launch powerful beam attacks from medium range.[2][6][7] As for the GN Claws, they are physical blades located in the lower section of the waist side binders and served as back-up close combat weapon.[2][6][8][11]

The last known weapon of the Susanowo is carried over from the Masurao – the ring-shaped Beam Chakram fired from between its head antennas.[2][4][6][8] The Susanowo also retained the Masurao's shoulder and elbow-mounted GN Field generators for defense.[2][4][6][7] Other features inherited from the Masurao included the pair of GN Drive Taus in the waist side binders, the Trans-Am System which can be activated to briefly increase its output by three-fold, the GN Particles control technology installed in its head antennas and waist side binders, the ability to display light patterns on the white part of its head, etc.[6][7][12][13] Additionally, the head of the SVMS-01O Over Flag piloted by the late Daryl Dodge remained hidden within the Susanowo's head.[2][11][12] According to some sources, the Susanowo later served as the basis of the GNX-903VW Brave (Commander Test Type) and GNX-903VS Brave (Standard Test Type).[14][15]

The pair of Enhanced Sabers are solid blade swords that served as the Susanowo's main weapon.[2][6][11][16] Among the two, the "Shiranui" is the longer one and is wielded in the left hand, while the "Unryu" is shorter, slightly thicker, and is wielded in the right hand.[2][6][10][16] The blade of these sabers can split open slightly and beams can be emitted to cover their surface, making them combination swords that have the benefits of both solid blade sword and beam saber.[2][5][7][11] This combination sword technology is said to be developed from the plasma sword technology used in the SVMS-01 Union Flag's sonic blade.[17][18] The beam generator of the "Shiranui" was taken from the GNX-U02X Masurao's "Howard" GN Long Beam Saber, while the beam generator of the "Unryu" was taken from the Masurao's "Daryl" GN Short Beam Saber.[2][5][6][7] The "Shiranui" and "Unryu" can be stored on mount latch located on the underside of the waist side binders, one saber per binder.[2][5][7][11] It is also possible for these mount latches to be attached to the side of the rounded, black-colored section at the top of the binders.[5][11]

A double-edged weapon formed by connecting the pair of Enhanced Sabers at their grip sections, with the "Shiranui" becoming the top section and the "Unryu" serving as the bottom.[2][3][10][16] The Souten can be stored on a mount latch attached to the back of the waist.[2][5][7][11]

A high-output, large beam cannon built into the body of the Susanowo, it has three muzzles, one hidden in the abdomen and one concealed in each shoulder.[2][3][6][11] When used, beams emitted from the three muzzles will converge in front of the mobile suit, forming a massive ball of energy that is then launched at the enemy, enabling the Susanowo to attack from medium-range.[2][3][6][11] Although there is a time lag in launching its attack, the Tri-Punisher's destructive power as a built-in ranged weapon is top-class.[3][6][16] This weapon is not equipped by the Susanowo's predecessor, the Masurao, nor is it ordered by Mr. Bushido who preferred close combat.[2][7] The Tri-Punisher was installed because the Susanowo served as the testbed for the ESF Forces' next mainstay machine that the Susanowo's development team wanted to build.[2][7]

A ring-shaped cutting beam formed between the tip of the Susanowo's large head antennas that is then launched to restrict enemy movements.[2][6][7][11] This experimental weapon was first installed in the Masurao, and utilized the GN Particles control technology incorporated into the pair of head antennas, which are advanced version of the clavicle antennas.[2][4][6][7]

A GN Claw, consisting of a pair of white-colored blades, is built into the lower half of each waist side binders.[2][6][10][11] Used for striking and grasping attacks, the blades separate from each other and extend outward when deployed.[2][6][8][11] Also known as “GN Claw Arm” or “Claw Arm”, they are considered back-up close combat weapons.[6][8][10][11]

A countermeasure against the energy backflow from the Enhanced Sabers, it is equipped on the left forearm.[2][7][8][16] This placement of the gauntlet is due to Susanowo's left hand being the dominant one in wielding its sabers, which is a result of Mr. Bushido being left-handed.[2][6][7] While not its intended use, the gauntlet is capable of withstanding attacks from the enemy.[2][7]

Like the Masurao, Susanowo has a power cable that extends from the back of its head, but this cable is colored blue instead of black.[2][4][7][8] When the "Souten" is used, the power cable connects to the back of the left shoulder to supply the weapon with power from the GN Condenser mounted on the mobile suit's back.[2][3][7] If the "Shiranui" and "Unryu" are wielded separately, this cable can directly connect to the back of one of the Enhanced Sabers.[2][5][7][11] It seems this direct linkage is not possible with the "Souten" as the Enhanced Sabers' ports for connecting with the cable are blocked when they combine to form the double-edged weapon.[2][5][11]

As with the Masurao, the Susanowo is not equipped with any shield as it wields a saber in each hand.[2][4][7] Therefore, it retained the spike-shaped protrusions on the outer side of the elbows and shoulders that function as small GN Field generators.[2][4][6][7] Additionally, these four small GN Field generators serve as sub-thrusters, enhancing the mobile suit's aerial attitude control capability.[2][6][7]

The Susanowo inherited the Trans-Am System of the Masurao, which was developed independently by Billy Katagiri based on notes left by the late Professor Eifman.[1][2][7] When activated, this system releases at once all of the compressed high-density GN Particles accumulated in a machine, enhancing its thrust and defensive capabilities as well as allowing it to perform at three times its normal output for a limited time.[7][19] Additionally, the entire machine will glow red and afterimages are also generated during movements.[3][7][12] Since the Susanowo's GN Drive Taus will burn out and shut down after the use of this system, the mobile suit was designed to leave spare particles in its GN Condensers for returning to base.[7][20] Unlike when the Masurao's Trans-Am System was utilized on Earth against the GN-0000+GNR-010 00 Raiser, blood did not flow out of Mr. Bushido's mouth when he used the Susanowo's Trans-Am System against the 00 Raiser in space.[3][12][21] The reason behind this is unknown. 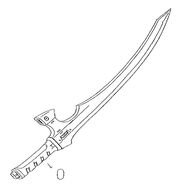 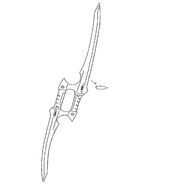 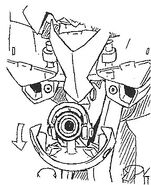 Power Cable attached to the back of the left shoulder 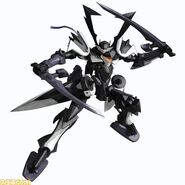 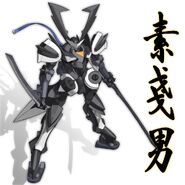