The GNX-Y802T Neo-Hed (aka Neo-Hed, No Head) is the successor of the GNX-704T Ahead featured in Mobile Suit Gundam 00V. Its test pilots were Amy Zimbalist and Deborah Galiena.

The successor to the GNX-704T Ahead, the Neo-Hed was developed as a candidate for the Earth Sphere Federation's (ESF) next generation heavy mobile suit.[1][2][3][4] Its development utilized data collected by testbed units such as the GNX-704T/AC Ahead Sakigake (Sakigake) and GNX-704T/SP Ahead Smultron (Smultron), thus features of and technology derived from both machines were incorporated into its design.[1][2][3][4] The Neo-Hed's development team, consisting of former Human Reform League engineers like the Ahead's, devised a plan to split the ESF's mass production mobile suit into two series: a new GN-X series model as a lightweight mobile suit, and the Neo-Hed as a heavy mobile suit.[2][4][5] The main feature of the Neo-Hed is the elimination of its head unit [1][2][4][5] Due to this bold and unusual style, this mobile suit, which was originally to be called Neo Head, became known as No Head and the name stuck.[1][2][4][5]

Combat data had shown that sensors concentrated in the head were often hit and destroyed in battle.[2][4][5] Thus, the Neo-Hed was designed without a head unit, and the sensors were distributed all over its body, including some placed on the top surface of the mobile suit.[2][4][5][6] The Neo-Hed is also more heavily armored than the Ahead, with added GN Verniers on its limbs that double as GN Condensers.[2][4] These GN Verniers were said to be developed from the Smultron's shoulder thrusters.[4] Additionally, the Neo-Hed utilized the same movable, thruster-equipped backpack as the Smultron.[2][4] Together, the GN Verniers and backpack granted the Neo-Hed high mobility and high controllability.[2][4] The Neo-Hed's armament included a GN Beam Rifle with a bayonet function, a GN Beam Saber, and a GN Sword, and the machine displayed high offensive capabilities during testing.[2][4][6] Its GN Sword was developed using data from the Sakigake, while the storage of its GN Beam Saber under the left chest is similar to how the Sakigake stored its GN Short Beam Saber.[2][4]

As the Neo-Hed served as a trial machine, it was painted in bright demonstration colors, but the completed mobile suit never made any public appearance.[2][4] This was because a huge scandal broke out following the revelations of the A-Laws's brutal actions, leading to the public image of the Ahead (a mobile suit exclusive to the A-Laws) becoming extremely negative.[1][2][4][6] Thus, even though the Neo-head was developed with advanced technologies and had no performance issues, the ESF made a political decision to drop the Ahead derived mobile suit in consideration of public opinions.[1][2][4][5] 10+ prototype units of the Neo-Hed were built before the mobile suit's development was terminated.[2][4][5] A mobile suit based on the GNX-Y901TW Susanowo and developed by a rival team of former Union engineers was likely to be selected as Neo-Hed's replacement.[2][4]

An improved version of the GN Beam Rifle used by the GNX-704T Ahead, it has an added GN Beam Saber generator under the barrel that can be used as a bayonet.[2][4]

This GN Beam Saber of the Neo-Hed has adjustable output and blade length, granting it excellent adaptability.[2][4] It is stored under the left chest, similar to the GNX-704T/AC Ahead Sakigake's GN Short Beam Saber.[2][4]

A large physical sword with a GN Field applied to its surface.[2][4] It is stored on the back of the left shoulder when not in use.[2][4] As this weapon is developed based on close combat data from the Ahead Sakigake, its placement on the mobile suit is designed for left-handers.[2][4] It was planned that when the Neo-Hed enters mass production, units with GN Sword placed for right handers will also be produced.[2][4]

A few days after they completed a series of testing on the next generation GN-X series unit, Deborah Galiena and Amy Zimbalist were tasked to test pilot the Neo-Hed, whose adoption by the Earth Sphere Federation was scrapped due to the A-Laws' scandal. Their superior wanted to know if the Neo-Hed had any noteworthy technology. Undoubtedly, this must have been an unbearable insult for the Neo-Hed's development team; not only was their machine dropped, the technology they worked so hard to developed might also be used in the replacement machine based on the GNX-Y901TW Susanowo, which was being developed by a separate team consisting of former Union engineers. The Neo-Hed's development team was comprised of former Human Reform League engineers, and although both teams now served the Earth Sphere Federation, a sense of rivalry between them still existed.

When Deborah and Amy arrived at the hangar where the Neo-Hed was stored, they instantly sensed a depressing mood among the crew. Amy then commented that the atmosphere was akin to a funeral, and while Deborah agreed with his sentiment, she knew better than to voice it out. One of the engineers in the hangar approached them and gave a displeased glare at Amy. It seemed that he had overhead Amy's comment. He asked if the pair were the test pilots, and Deborah confirmed it in an impassive, business-like manner. To someone who is displeased, replying with a smile might elicit the opposite response. The engineer then wondered if the higher-ups were trying to mock them by sending two ace pilots. A clueless Amy wanted to probe further on what the engineer meant, but was immediately cut off by Deborah who said that they would try their best to meet the engineers expectations.

After piloting the Neo-Hed, Deborah was impressed by its performance. She also agreed with the reasoning and principles behind removing the head, and distributing the sensors throughout the machine's body. She frankly told the engineer her thoughts on the mobile suit, and for the first time, the engineer's face lit with happiness as he thanked her. However, the mood was soon ruined when Amy complained about the lack of a face. To him, a cool-looking face is necessary for a brilliant battle. He also remarked that the engineers had no idea what those in the field wanted. The engineer angrily responded that the head was merely a decoration, and then criticized Amy for his clumsy piloting, adding that he was therefore unqualified to make any comment. Offended by these words, Amy got into a scuffle with the engineer. On the side, Deborah was too exhausted to intervene. 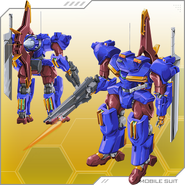