The GNX-U02X Masurao (aka Masurao) is a custom mobile suit introduced in season two of Mobile Suit Gundam 00 and is piloted by Mr. Bushido.

Developed by a mobile suit development team consisting of Billy Katagiri and other former Union engineers, the Masurao was a prototype (testbed) for the Earth Sphere Federation's next mainstay machine that would replace the GNX-704T Ahead and the GNX-609T GN-XIII.[1][2][3][4] The Masurao was originally based on the Ahead, but when Billy accepted Mr. Bushido's request to turn it into his custom machine with the fastest speed and the strongest sword, its development was restarted from scratch, with a machine from the Union Flag series serving as the new base unit.[1][2][5][6] To be exact, the SVMS-01X Union Flag Custom II became the basis of the Masurao, whose model number, "GNX-U02X", indicated its status as the next machine in line.[2][3][7][8]

The appearance of the Masurao and its specialization in close combat were according to Mr. Bushido's preferences.[1][2][4][9] Its main weapons are a pair of GN Beam Sabers named after Mr. Bushido's fallen wingmen: Howard Mason and Daryl Dodge.[2][9][10][11] Other weapons included special Beam Chakram fired from the tips of its head antennas, and low-powered guns for interception, anti-personnel purposes, etc.[2][6][11][12] Depending on sources, these guns are said to be head-mounted Laser Machine Guns, head and/or chest mounted GN Vulcans, or a mix of head-mounted Laser Machine Guns and chest-mounted GN Vulcans.[2][6][11][13] For defense, the Masurao can generate GN Field from the four small GN Field generators on its shoulders and elbows.[2][4][11] It should also be noted that the Masurao's head unit was built around the head of the SVMS-01O Over Flag piloted by the late Daryl Dodge.[1][4][6][11]

The Masurao (even in its original Ahead based form) also doubled as a test machine for the Trans-Am System, which at that time, was only usable by the original GN Drive-equipped Gundams.[3][11][12][14] Installation of a Trans-Am System usable by GN Drive Tau-equipped mobile suit was possible due to Billy's analysis of the late Professor Eifman's notes on the GN Drive.[2][9][14][15] The Masurao then became the first GN Drive Tau-equipped mobile suit to have and utilize the Trans-Am System, which caused it to glow red and its output to be increased by three-fold for a brief period of time.[4][10][13][16] Furthermore, the Masurao's Trans-Am System was designed to make full use of the mobile suit's two GN Drive Taus, giving it overwhelming output that cannot be achieved with a single GN Drive Tau.[11]

While the Masurao was equipped with two GN Drive Taus, one installed in each waist-mounted side binder, this is not a Twin Drive System because the two drives are not synchronized.[3][11][12][16] Data from the GNX-603T GN-X and the GNX-704T/AC Ahead Sakigake were also utilized in developing the Masurao.[7][8] Its head antennas and the waist-mounted side binders incorporated the GN-X series' X-shaped clavicle antenna technology for controlling GN Particles as it proved effective in stabilizing mobile suit during aerial melee combat.[2][11][17] Additionally, it is due to the particle control capability of the head antennas that the Beam Chakram can be formed and fired.[2] Like the Ahead Sakigake, the Masurao has a cable on the back of its head for powering various weapons.[2][11][12]

Other features of the Masurao included the ability to display light patterns on the red part of its head, which is similar to the Over Flag's luminescence facial patterns, and a cover armor modeled after the Union's crest mounted on the back of the mobile suit.[2][10][11] The center of this cover armor has a charge connector for mounting an additional GN Condenser.[2] When the Masurao was later modified and upgraded into the GNX-Y901TW Susanowo, it became standard for a GN Condenser to be mounted on this charge connector.[2][14][16][18] Subsequently, the Masurao's design was combined with technology from the AEU, leading to the creation of the transformable GNX-903VW Brave (Commander Test Type) and GNX-903VS Brave (Standard Test Type).[19][20][21]

The GN Long Beam Saber and the GN Short Beam Saber served as the Masurao's primary weapons, and are wielded in its left and right hand respectively.[2][4][10][11] The beam generator of each saber, and the entire weapon by extension, was named by Mr. Bushido after his fallen wingmen: Howard Mason and Daryl Dodge.[1][2][11][12] Both sabers have the same capabilities, but the GN Short Beam Saber is shorter as implied by its name, and is also slightly thicker.[2][10] When not in use, the sabers are stored on mount latch on the underside of the waist-mounted side binders, one per binder.[2][11] Alternatively, the sabers can be stored within the binders (one per binder) and accessed through a flap on the binders' underside.[3] Each saber also has a pair of thrusters at the rear, allowing them to fly automatically from the binders into the Masurao's hands when they are needed.[2][3][12] Another feature of both sabers is that the shape of their hand guard is modeled after the Union's crest.[2]

An experimental ranged beam weaponry installed in the head of the Masurao.[2][6][11][12] Using the high GN Particles control capability of the large antennas on Masurao's head, a ring-shaped particle beam can be formed between the tip of these antennas and then launched at the enemy.[2][6][11][12]

A small caliber laser gun is mounted in the left and right side of the head.[2][11] As the pair of guns fire lasers instead of particle beams, they have low destructive power, but excellent accuracy and rapid-fire capability.[2] Ineffective against mobile suits, they are used for immediate response to small targets, such as humans and aircrafts.[2][11] However, there are claims that the Masurao is armed with GN Vulcans instead of Laser Machine Guns.[1][3][12][13] There is also another claim that it has a combination of two Laser Machine Guns in the head and two GN Vulcans in the chest.[11]

Similar to the Laser Machine Guns, the GN Vulcans have low firepower, but excellent rapid-fire capability.[11] They are used for anti-personnel purposes, intercepting approaching enemy units, etc.[11] Location and number of GN Vulcans on the Masurao varied according to sources; most merely stated that they exist but provided no location or number,[1][3][4][12] one noted that it has two GN Vulcans without specifying the location,[13] while another said that it has four GN Vulcans, two in the sides of the head and two in the chest.[6]

As the Masurao wields a saber in each hand, it is not equipped with any shield.[2] Instead, it has spike-shaped protrusions on the outer side of the elbows and shoulders that function as small GN Field generators.[2][4][11] The GN Field generated is of a small size, but they are still viable defensive equipment.[11] Despite their usefulness, Mr. Bushido is said to dislike this equipment and never used it.[22] Additionally, these four small GN Field generators serve as sub-thrusters, enhancing the mobile suit's aerial attitude control capability.[2]

A system that when activated releases at once all of the compressed high-density GN Particles accumulated in a machine, enhancing its thrust and defensive capabilities as well as allowing it to perform at three times its normal output for a limited time.[11][16][23][24] Additionally, the entire machine will glow red and afterimages are also generated during movements.[4][10][11][16] This system was originally hidden in the black box of the original GN Drive equipped by the Gundams, and usable only by them.[3][14][16][23] However, through analyzing the handwritten notes on GN Drive left by the late Professor Eifman in his study room, Billy Katagiri was able to create a Trans-Am System usable by GN Drive Tau-equipped mobile suits, with the Masurao being the first to have and use this system.[4][15][13][25] This also meant the Masurao's Trans-Am System was developed independently from the one used by the Innovators.[4][16][26][27]

Regardless of how the Trans-Am System was developed, the GN Drive Tau will burn out and shut down after the use of said system.[16][26][28][29] Thus, the Masurao was designed to leave spare particles in its GN Condensers for returning to base.[16][29] Using the Masurao's Trans-Am System, Mr. Bushido was able to put Setsuna F. Seiei and his GN-0000+GNR-010 00 Raiser on the defensive, and later fight on par when Setsuna activated the 00 Raiser's Trans-Am System.[10] However, this system seem to place a heavy burden on Mr. Bushido, as streams of blood flowed out from the corners of his mouth as the battle progressed.[10][11] The exact cause for this is still unknown. Later on, Billy further fine-tuned the Masurao and even improved its Trans-Am System, but details of the improvement implemented are never revealed.[30]

Like the GNX-704T/AC Ahead Sakigake, the Masurao has a cable extending from the back of its head that can connect to and provides power to various weapons.[2][10][11][12] 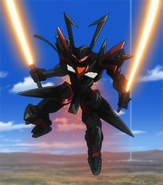 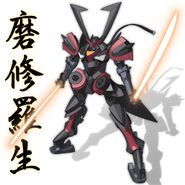 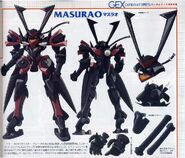