The GNX-903VW Brave (Commander Test Type) (aka Brave) is a mobile suit introduced in Mobile Suit Gundam 00 The Movie: A Wakening of the Trailblazer. It is piloted by Major Graham Aker, commander of the Solbraves.

The Brave is the successor to the AEU-09 AEU Enact and SVMS-01 Union Flag series. Developed by ESF engineers that were once part of the AEU and Union, it is built with the latest in ESF-developed GN-Tech, and has aesthetics similar to that of its predecessors. The Brave is a pre-mass production model, still in beta phase and its design and technology are based on the GNX-U02X Masurao.[1] The Brave is developed for use in an emergency deployment mobile suit squadron.[4] This squadron would need to be deployed and enter combat zones in a short amount of time.[4] In addition to its high mobility and the flight mode's long distance travel capability, the Brave also has overwhelming firepower.[4]

The new transformation ability of the unit is helped in part by the new Leif OS.[4] While most of the transformation structure is derived from AEU/Union flight models, the arms being folded to the rear is new, and revolutionized the entire transformation structure for the ESF.[4] This is attributed to the feedback from data of the captured GN-003 Gundam Kyrios.[4] The Commander Test Type has two GN Tau Drives mounted on its waist binders, similar to the Masurao and GNX-Y901TW Susanowo. The standard type only possess one GN Drive Tau on the back.[1] The Standard and Commander Types are for the most part identical in design; save for customization and upgrades for the Commander Type as it was meant to be used by an ace pilot, with the Standard Type emphasizing easier controls.[4] The largest noticeable differences are the Drive count/positions as well as the slightly longer antenna. Additionally, the Commander Type's weapons have also been configured to match Graham's left handed combat style.

While the Braves does have a pair of GN Tau Drives mounted on the side binders, they do not have a Twin Drive System.[5] In the scenario where one of the side binder Drives is destroyed, the remaining Drive can be placed onto the auxiliary Drive socket on the back (same location as the Standard Type) via the binder support arm.[4] The availability of three drive sockets also grants the Brave expandability and developability that enables various trials that speed up its overall development.[4] The number of GN Drives on the final production model of the Brave will eventually be standardize based on the performance data of the two test types at the end of the test period.[6]

Uses non-beam ammunition and a pair are mounted on the chest.[2] Primarily used to shoot down missiles.

Built inside the lower legs. It is an electronic warfare type equipment that can disable an enemy's sensors via particle interference.[2]

One mounted in each wrist, it trades in firepower for a high firing rate. Typically used to shoot down missiles or for point defense. Their main purpose is to act as rear firing weapons during Fighter Mode.[4]

The Brave's primary firearm which doubles as the unit's forward section in flight mode. When in use, the front section of the GN Beam Rifle splits apart to fire beam shots. Just like the GNX-Y901TW Susanowo, the Brave also possesses the ability to use the "Tri-Punisher" attack by combining the beam output of the Drake Howling and the GN Cannons.[2] However, this destructive attack requires charging, and cannot be rapid-fired. The Drake Howling can also fire non-charged shots that are less powerful, but can fire in rapid succession. The Drake Howling also has a short barrel mode that is formed by removing the parts of the rifle that split, and it trades in firepower for firing speed.

One stored in each of the Brave's side binders. The Commander Type's GN Beam Saber is both larger and has a higher output than the Standard Type's.[4]

Stored in the legs' weapon bays, two can be stored per leg, for a total of four missiles.[4]

The Brave's overall capabilities can be enhanced through the Trans-Am System for a limited time.

A cable that provides particle feed to the Brave's weapon when necessary.

Stores the Brave's GN Cannons, Beam Sabers, and also wings for atmospheric flight. The pair of side binders can rotate to function like a Defense Rod.

Used to provide GN Tau Particles to the Brave for traveling long distances and can also be used to reduce the unit's own particle consumption.[2] It is mounted on the rear end of the Brave when in flight mode and it is not known whether it is compatible with it's MS mode. Usually jettisoned during battles due to it being a hindrance.[2]

Note: The Brave (Commander Test Type)'s history and exploits can be found on Graham Aker's page. 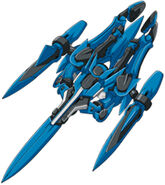 Completion of transformation into MS mode

After destroying an ELS

Braking and preparing for the "Tri-Punisher" attack

Using the "Tri Punisher" to wipe out ELS

The "Solbraves" flying into combat at the absolute defense line

GN Particles being emitted from both GN Drive Taus

In Flight mode with the Brave (Standard Test Type) 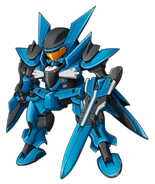 Data file on the Braves. Note the GN Beam Saber next to the side binder.