The GNX-803T GN-XIV (aka GN-XIV, pronounced "Jinx Four") is the fourth generation of the GN-X series featured in Mobile Suit Gundam 00 The Movie -A wakening of the Trailblazer-. It is deployed by the Earth Sphere Federation Army during the ELS Conflict.

The GN-X IV is the successor to the GNX-704T Ahead and GNX-609T GN-XIII in AD 2314, and most of them are actually refitted GN-XIIIs.[1] The upgrades implemented on the GN-XIV were based on technical and combat data of its predecessors, and data found on the Innovators' ship/base of operations, the mothership Celestial Being, which included information from Celestial Being and the Innovators. By studying and incorporating all the technologies from these sources, the GN-XIV is the most advanced machine in the GN-X series to be developed, and believed to surpass even the 3.5 Generation Gundams in performance.[2] This makes it one of the most formidable mass production machine to date.

Although the Ahead series was different from the GN-X series, the former's backpack thrusters were incorporated into the GN-XIV, resulting in new thrusters on the back of the shoulders for greater speed and maneuverability. As with the GN-XIII, the the GN-XIV's shoulders have hardpoints for mounting various armaments and equipment, allowing greater adaptability and versatility in the battlefield. Its overall combat capabilities can be enhanced with the power of the Trans-Am system. As a last resort measure, the pilot can overload the Trans-Am system to explode the mobile suit as a kamikaze maneuver. The cockpit layout is the same as that of the previous GN-X models, which is characterized by tight space with hardly any distance between the monitor and the pilot.[3] The GN-XIV is similar to the Innovade-use machines as it also receives back up from Veda, evolving its operating system immensely.[3] Software wise, it is granted a power up that deems it as being utterly incomparable with that of older GN-X models.[3]

The suit's standard ranged armament, it is also known as GN Short Rifle. Depending on the pilot's preferences, the rifle's short barrel can be switched with a longer barrel, resulting in the GN Long Rifle. The GN Beam Rifle is easier to wield due to its short size, and combined with its higher firing rate, it is more suitable for anti-MS combat. The ELS GN-XIV has the GN Beam Rifle integrated into one of its arms. When not in used, the rifle is attached to a hidden weapon mount located in the rear waist armor.

The GN Beam Rifle with a longer barrel instead of the original short barrel, it has higher output and more suitable for anti-ship and fortress combat. The ELS GN-XIV has the GN Long Rifle integrated into one of its arms.

A melee combat weaponry that uses compressed GN particles to create a beam blade, the GN-XIV stores two GN Beam Sabers in its thigh. The ELS GN-XIV can emit the GN Beam Saber directly from its hands.

The manipulators of the GN-X series of mobile suits have sharp tips, and can be used in melee combat when enveloped in GN Field.

The GN-XIV has four GN Vulcans, two in the head and two in the waist. They fire beams at a high rate and are primarily used to shoot down missiles or restrict the movements of an enemy MS. This weapon is not present in the ELS GN-XIV.

Just like the GNX-607T/AC GN-XII Sword, the GN-XIV can optionally carry a GN Buster Sword for close quarters combat. The GN Buster Sword is a physical blade that uses GN Particles to increase its cutting power. It can also deploy a GN Field as a defense mechanism, and it is thank to this ability that it can be used against the ELS and not be assimilated. Not many GN Buster Swords were produced and as a result, it is a rare piece of equipment.[4]

Mounted on the shoulder, this optional large shield is created using Innovade technology and can generate GN Field. Up to two units can be mounted if the pilot wishes, and a pair of GN Hand Grenades are stored behind each shield.

The same weapon used by other Earth Sphere Federation units, this bazooka can fire GN particle missiles or non GN particle missiles. ELS GN-XIV wielding replica of this weapon had two of them integrated into its arms, they fires particle beams instead of physical projectiles.[5]

An optional equipment, the Surplus Particle Tank not only provides the GN-XIV with more GN particles for weaponry or propulsion as suggested by its name, it is also equipped with thrusters to enhance mobility. Two units can be equipped on the GN-XIV, one behind each shoulder.

A modified version of the long-range backpack originally used by the GNX-704T Ahead, this optional equipment widens the cruising range and operating area of the GN-XIV. It is attached to the cone at the back of the GN Drive Tau and can be easily purged when not needed anymore.

When activated, it enhances the overall performance of the GN-XIV 3 fold for a limited time. It is also capable of pushing the GN Drive Tau to self-destruct when the pilot overloads the system.

When the wreckage of the old Europa vessel came close to Earth, the Earth Sphere Federation Army dispatched a small force to destroy it. The small fleet of three Baikal-class vessels were unable to destroy the wreckage despite wave after wave of attacks from their teams of GN-XIVs, including one unit piloted by Andrei Smirnov. The fleet then deployed the GNMA-Y0002V Gadelaza to complete the mission.

As the main force MS of the ESF Army, GN-XIVs were used by the fleet led by Vice Admiral Kim to intercept the ELS armada that had appeared from Jupiter's red spot. Descartes Shaman and his Gadelaza were also part of this fleet for the purpose of distracting the ELS. However the plan failed when Descartes operated alone. The ELS assaulted and assimilated all deployed GN-XIVs and ships that attempted to hold them back.

With the ELS now on a direct course to the Earth, the ESF Army deployed every mobile suits (regardless of whether they were GN-powered or not) available to their "Absolute Defense Line". At the beginning of the battle, most GN-XIVs fared well against the much larger enemy numbers, however once the ELS begun to shapeshift into their own version of the GN-XIV the battle took a turn for the worst.

The ELS eventually started assimilation of the Celestial Being's 80m-Grade Laser, thus forcing the ESF Army to destroy it. Some of the ELS soon broke through the defense line and headed straight for Earth. Andrei Smirnov and his squad of GN-XIVs proceeded to intercept them. Having already lost one of the suit's arms, Andrei could only utilize a GN Buster Sword to slash at the large ship-like ELS. However the ELS soon begun to assimilate Smirnov's unit, and some of the units that made up his squad. In the end, Andrei and most if not all his squad, self-destructed their GN Drive Tau via overloading the Trans-Am System, destroying the ELS at the cost of their lives and protecting Earth.

By the time that Andrei had died, Patrick Colasour and his GN-XIV had begun to be overwhelmed by the ELS. His unit was assaulted by an ELS GN-XIV and had started to be assimilated by the ELS. Fortunately, Setsuna F. Seiei and his GNT-0000 00 Qan[T]​ arrived on the field. The Gundam Meister destroyed Patrick's GN-XIV in one shot, thus saving Patrick by catapulting him out into open space. Even as the Celestial Being was being assimilated along with much of the ESF Army fleet, many GN-XIV pilots refused to surrender and prepared to fight to the bitter end. By the time the conflict ends, the ESF Army has lost 70% of its total forces. What percentage of these losses are GN-XIVs and how many had survived are unknown.

Some time after the conflict, and with new weapons development frozen by the government, the ESF Army decided to upgrade the remaining GN-XIVs into the GNX-805T/CF GN-XIV Core Fighter Loaded Type.

A figure in which multiple small ELSs are united to mimic the form of the GN-XIV. The rough silhouette is similar, but the details are different, and it has a rounded shape. The head camera is not four eyes, but one which is reminiscent of a mono-eye, and the legs are fixed with the toes standing. The cone thruster on the back is elongated, which is a remnant of a small conical ELS. Also, all the armaments are integrated with the arms, but the built-in armaments like the GN Vulcan have not been reproduced. The biggest difference is the color of the emitted GN particles and the particle beam, both of which are purple in this unit.

Appearing in episode 4 of Gundam Build Fighters: Battlogue, two of this Gunpla were assembled by Mario Renato for his younger brothers, Julio and Serio.[6] They have the same basic performance as the standard GN-XIV, but are colored differently for ground deployment in jungle areas.[6] Together with Mario's GNX-611T/G Striker GN-X, the three Gunpla forms the new Renato Team that is based on the tactical theory of 'heaven, earth and man' which is derived from a Chinese proverb.[6] 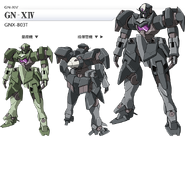 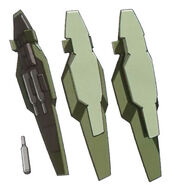 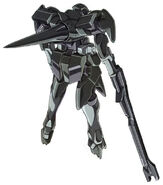 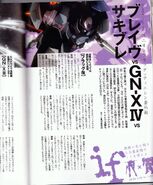 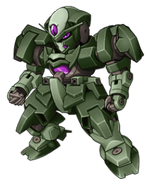 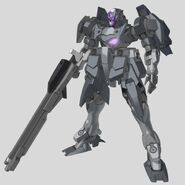 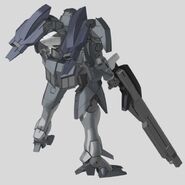 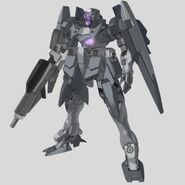 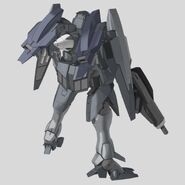 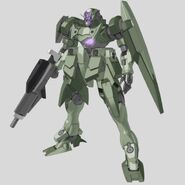 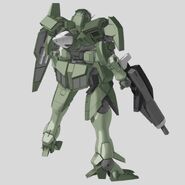 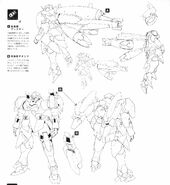 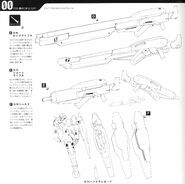 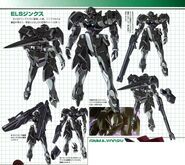