The GNX-704T Ahead (aka Ahead) is a mobile suit operated by the A-Laws in season 2 of Mobile Suit Gundam 00.

A new GN Drive Tau-equipped machine introduced in AD 2312, the Ahead is one of two mainstay mobile suits operated by the A-Laws (the Earth Sphere Federation's autonomous peacekeeping force), the other being the GNX-609T GN-XIII.[1][2][3][4] Unlike the GN-XIII, the Ahead is exclusive to the A-Laws, it is developed for and typically piloted by commanders or officers with at least a rank of First Lieutenant.[2][5][6][7] The Ahead is a general-purpose unit created with the goal of setting a new standard for GN Drive Tau-equipped machine, and was designed to show high performance in all situations.[2][6][8][9] Its performance is said to surpass that of the third generation Gundams used by the Celestial Being in AD 2307 to 2308.[2][6][10][11] Depending on sources, this mobile suit is stated as being based on the GNX-603T GN-X or the GN-XIII, and also integrated data from the MSJ-06II-SP Tieren Taozi.[2][12][13][14]

Development of the Ahead was assigned to a team comprised of former HRL engineers due to their experience in developing mobile suits capable of operating in space and on the ground without changing equipment such as the Tieren Taozi and the MSJ-06YIII-B Tieren Kyitwo, which could be easily applied to the development of a GN Drive Tau-type unit and allows the machine to fully utilize the GN Drive Tau's overwhelming output.[3][4][15][16] It was also suggested that HRL engineers were selected due to HRL having an edge in mobile suit development through their studies of the remains of the GN-003 Gundam Kyrios, which they recovered after the defeat of Celestial Being in AD 2308.[15] Another contributing factor was that the competing Union team was weakened by the death of Professor Ralph Eifman and the departure of technical advisor, Billy Katagiri, due to personal reasons, leaving the team unable to fully utilize the technology acquired from the battles with the Celestial Being.[3][4]

The Ahead's cockpit is located in the chest, with the orange-colored section in front of the neck being part of the cockpit hatch.[9][10][16][17] The cockpit's interior is fitted with the same systems as the GN-X's.[7][16][18] Also like the GN-X, the Ahead has four camera eyes and a pair of GN Vulcans on its head, but the rest of its body structure is different.[6][8][9][16] To achieve high performance, the Ahead adopted a basic structure that is closer to that of a Gundam than the GN-X.[2][6][7][10] For example, underneath its chest armor, the Ahead's GN Drive Tau's layout and related components are similar to those of a Gundam's GN Drive.[2][6][8][16] However, due to the negative public perception of the Gundams at the time, outward appearances resembling those of the Gundams' are covered up, with the cone at the back of the GN Drive Tau being an exception.[2][6][8] Meanwhile, the Ahead's joints referenced those of the HRL's Tieren series.[16]

As with the GN-XIII, the Ahead's GN Drive Tau has improved performance and the GN Particles produced no longer have any toxic effect on the human body when utilized as beams.[11][16] However, the GN Drive Tau's output is insufficient to power the mobile suit, and so a supplementary battery is also installed, turning the Ahead into a hybrid machine.[4] The two pods on the back of the Ahead are its main thrusters and due to their movable design, they can produce thrust in various directions.[16] Thanks to these thrusters, the Ahead has better attitude control capability in space as well as high flight performance in the atmosphere.[7][16] Hardpoints are located on the Ahead's forearms, hips and back of the waist for mounting various equipment and weaponry.[9][10][16] Additionally, the blocks above the legs, on both sides of the waist, are weapon racks that can store GN Field Hand Grenades, etc.[10][11][16]

Besides the aforementioned GN Vulcans on the head, other standard weaponry of the Ahead included a handheld GN Beam Rifle that can be converted into a smaller GN Submachine Gun, two GN Beam Sabers stored in the shoulders and a forearm-mounted GN Shield.[6][8][9][16] Optional weaponry such as GN Field Hand Grenades, NGN Bazooka, Large Missile Launcher and Small Missile Launcher can be equipped according to the mission.[6][10][16][19] The Ahead can also mount an Automaton Container on the hardpoint on the back of its waist in place of the usual waist thruster unit.[6][8][10][16] The Automatons transported in this container are automated machines that can be used for anti-personnel combat.[1][8][16][20] For travelling long distances, the Ahead can attach special backpack to the cone at the back of its GN Drive Tau.[6][7][10][16]

Due to its versatility, the Ahead was also used as a testbed for the development of custom machines.[6][8][21][22] For example, the GNX-704T/AC Ahead Sakigake and GNX-704T/SP Ahead Smultron were developed to match the characteristics of their respective ace pilots.[8][19][21][23] These custom machines also served to further evolve the Ahead, and their data were utilized in the development of a next generation Ahead.[23][24][25][26] Other variants of the Ahead included the GNX-704T/FS Ahead Forcing Scout Type, which was developed for long distance, long duration solo operation.[14][24][26][27] Following the revelation of the A-Laws' wrongdoings, the public image of the Ahead, which is exclusive to the organization, hit rock bottom and with its use becoming untenable, the Ahead series is ultimately discontinued by the new Earth Sphere Federation administration.[4][25] Despite this, the Ahead series' technology is incorporated into the Earth Sphere Federation Forces' new mainstay mobile suit, the GNX-803T GN-XIV.[4][10][28][29]

The Ahead's main weapon, this beam firearm's firing range and destructive power are several times that of the rifle used by the GNX-603T GN-X.[1][7][8][9] Two shots from the Ahead's GN Beam Rifle are sufficient to destroy a Virginia-class transport ship used by Katharon.[1] A pair of cylindrical-shaped GN Condensers are equipped on the sides of the GN Beam Rifle in consideration that the Ahead, a GN Drive Tau-type machine, may run out of energy.[7][8][16] By changing parts, the GN Beam Rifle can become the smaller GN Submachine Gun.[8][9] The GN Beam Rifle can be stored on the hardpoints on the hips when not in use.[1][9][10]

An alternate main weapon for the Ahead, the GN Submachine Gun is the GN Beam Rifle without the long barrel and the pair of GN Condensers.[1][8][9][16] Although its firing range and destructive power are inferior to the GN Beam Rifle's, it is still capable of destroying non-GN Drive-type mobile suits such as the AEU-09OP AEU Enact Orbit Package and MSJ-06II-E Tieren Space Type in one shot.[1][8][16][30] Furthermore, it has better rapid-firing performance, and is also compact as well as easy to wield.[8][16] Like the GN Beam Rifle, the GN Submachine Gun can be stored on the hardpoints on the hips when not in use.[31]

Melee weapon that emits a beam blade made of GN Particles when drawn.[7][8][9][16] The Ahead is equipped with two GN Beam Sabers, one stored in each shoulder, and they slide out of the orange-colored shoulder compartments for grabbing by the mobile suit's hands.[1][8][9][16] Their performance is equal to the ones used by the Gundams.[6][8]

A physical shield mounted on the forearm, it is made of E-Carbon and a GN Field effect is applied to its surface, allowing it to achieve high defensive capability.[8][16] Capable of blocking most beams and physical attacks, the Ahead's GN Shield has the same performance as the ones used by the Gundams.[1][6][8][30]

A pair of 30mm caliber beam guns built into the top of the Ahead's head.[6][7][8][9] The GN Vulcans have low firepower, but can be rapid-fired intermittently and have high utility value.[8] They are used for restricting enemy's movements, creating a barrage, intercepting missiles, etc.[8]

An optional long-range weaponry, the first "N" in its name stands for "No", and as implied, it is a non-GN Particle firearm intended for use in battlefield where beam weaponry are ineffective due to the deployment of particle disruption measure.[9][31][32][33] Depending on the cartridge used, the NGN Bazooka can fire various projectiles including particle disruption shells, GN Missiles, or even beam shots despite its designation.[4][31][32][33] Each cartridge contains 6-7 physical projectiles.[4][6][33] The weapon is also alternatively known as "GN Bazooka".[6][7][10][19]

Several GN Field Hand Grenades can be stored in the weapon racks on both sides of the waist.[10][11][16] This seems to be the same grenade as used by the GNX-609T GN-XIII that releases four disc-shaped objects when thrown.[10][17][33] These discs and the grenade's cap then explode and disperse a substance that creates a temporarily GN Field-like effect that renders enemy's beam attacks useless.[17][33]

Optional equipment attached to the hardpoint on the Ahead's rear waist in place of the rear waist thruster.[1][6][16][20] The container is loaded with around 12 Automatons, which are unmanned machines that can be used for anti-personnel combat.[1][8][16][20] The Automatons transported by the Ahead are of a new model that operates using the GN Particles stored in their GN Condensers.[1][6][7][8] The Ahead can either drop the Automatons from the attached container at the destination, or release the container when close to the destination and have the container flies and land at the destination before the Automatons are deployed.[1][20][34] The Ahead's pilot can monitor the status of each Automaton through the mobile suit's cockpit computer.[1]

A special blue-colored cloak that the Ahead and the GNX-609T GN-XIII wrap around themselves to conceal their heat sources in space.[35][36]

The Ahead was introduced in AD 2312 as a general-purpose mobile suit exclusive to the autonomous peacekeeping force, the A-Laws. Prior to the appearance of the reborn Celestial Being, the Ahead's missions mainly consisted of destroying anti-Earth Sphere Federation dissidents, such as the Katharon and its older mobile suits. When the A-Laws fought with Katharon, and later the reborn Celestial Being, the Ahead was often seen leading the GNX-609T GN-XIIIs into battle. Though there were some teams that consisted entirely of Aheads. At its peak, the A-Laws had about 100 Aheads.[11] The A-Laws was disbanded and the Ahead series discontinued by the new government administration when the autonomous peacekeeping force's wrongdoings were exposed to the world. 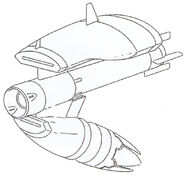 Close up of the GN Drive Tau's rear

A squadron of Ahead equipped with Automaton Container 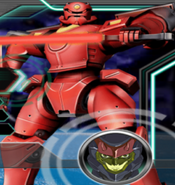 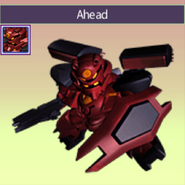