GNX-704T/SP Ahead Smultron (aka Ahead Quantum Brainwave Type, Ahead), is a customized Ahead unit from season 2 of Mobile Suit Gundam 00. It was piloted by Soma Peries, but it is later assigned to Louise Halevy.

The Smultron is a custom Ahead unit given to A-Laws officer Soma Peries to pilot. Since only one Smultron was created and it was given to Super Soldier 01, it was clearly designed to be operated by someone utilizing quantum brainwaves. With the additional equipment on the shoulders and GN Drive Tau it is likely that the Smultron's specifications allow it greater acceleration, which Soma's enhanced body would be able to handle the strain of better then a normal person.

The GN Beam Rifle is a GN Submachine Gun extended by an optional gun barrel. The firing distance is improved but it is unknown if the fire power is also improved.

As with previous GN-X models the Ahead is equipped with a pair of 30mm GN Vulcans used to intercept and destroy incoming missiles.

The Ahead Smultron is equipped with two GN Beam Sabers which are stored in compartments in the shoulders.One of its beam sabers has proven to be strong enough to equal Exia's GN Sword, and when both are used together they can melt through it.

Made of high strength E-Carbon. The GN-Field's defensive effect is stacked onto the material shield to give overall higher protection. A 60mm GN Vulcan gun is mounted within.

The Smultron was given to Soma Peries on her transfer into the A-Laws. She used it three times in battle, twice against Allelujah's Arios. Her first use of the Smultron was shortly after the Trilobite's failed attack when she intercepted Arios. Allelujah recognized that it was Marie in the mobile suit and refused to fight her, although he did attempt, and failed, to dodge her attacks so Soma managed to lightly damage the Gundam. The battle broke off when Katharon mobile suits appeared and Soma was forced to defend herself and retreat. The Smultron's second use came shortly after information about a Katharon base. The Smultron was part of the team of mobile suits that participated in the massacre, shooting down mobile suits that exited the base. The A-Laws retreated shortly after the Gundams arrived on the scene.

Soma used the Smultron a third and last time to defend against an attack from Celestial Being over the ocean. This would be the Smultron's second battle against Arios, a battle in which both suits were heavily damaged. When the Smultron was damaged, Allelujah grabbed her suit and pulled her down to ground. It was later salvaged.

Louise Halevy later requested to have the Smultron as her suit to "avenge" Soma's "death", which was supported by Major Aber Rindt. Louise would use the Ahead Smultron multiple times in battle against the Gundams. Her first time using this suit is to intercept the Ptolemaios, but Ptolemaios suceeded in escaping to space using trans-am. Her first battle with the mobile suit would be in space during the A-Laws ambush as Lagrange 1 where her squad was assigned to keep 00 Gundam occupied and away from the main assault force, but were completely out-matched by the capabilities of the 00 Raiser.

Her second use of the mobile suit was during the coup d'tat. During the Break Pillar incident she and fellow A-Laws ground forces helped in the destruction of the pillars pieces, but right afterward, alongside Andrei Smirnov, attacked the leader of the coup d'tat and Sergei Smirnov, even having a brief run-in with Marie in the GN Archer although neither knew who was piloting the other suit.

Louise would most likely continue to use the Smultron in the A-Laws' various attacks on Celestial being during their four month hiatus to rest, repair, and prepare. After Celestial Being destroyed the second Memento Mori Louise and the Smultron participated in a large scale attack on Celestial Being. The Smultron, and another Ahead piloted by Andrei, were disguised as a pair of meteors that drifted towards the Ptolemaios 2 from above while the ship and Gundams were dealing with a pincer attack of A-Laws mobile suits. However Celetial Being saw through the trick because it had been used on them before. The 00 Raiser intercepted the two however because Saji and Setsuna were trying to reach out to Louise they did not actually fight them and neither Ahead was damaged. This would be the last mission the Smultron would participate in as shortly afterward Louise is assigned to the new GNMA-0001V Regnant. 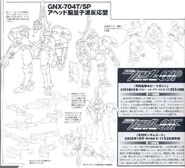 Retrieved from "https://gundam.fandom.com/wiki/GNX-704T/SP_Ahead_Smultron?oldid=71536"
Community content is available under CC-BY-SA unless otherwise noted.