The GNX-612T/AA Superbia GN-X (aka Superbia GN-X, pronounced "Superbia Jinx") is a variant of the GN-X series featured in Mobile Suit Gundam 00V. It is piloted by Hiling Care.

A specialized GN-X developed for assault landings from the sea. Because few factions at the time used mobile suits that were capable of operating underwater, it could effectively carry out missions such as surprise attacks. The assault landing unit necessary for underwater operation was purged upon landing. Although this machine was categorized as a GN-X III during development, it incorporated many innovative technologies (some of them belonging to the Innovators, and the same technologies were incorporated in machines like the GNMA-0001V Regnant), and it was close to the GN-X IV that was under development as a next-generation machine.

Used only by the GN-X series of mobile suits, the claw is a normal manipulator hand equipped with a GN Particle infused claw weapon. It is used only as a last resort in close combat.

Mounted on the forearms, the pair of GN Kunais are equipped with GN Beam Needles, GN Vulcans, and GN Swords.

The GN Beam Needle is like a scaled down Beam Saber, they are generated near the "hilt" of the GN Kunai.

Solid blades attached to its GN Kunai. It is one of Superbia GN-X's primary weapons.

Mounted on the Assault Landing unit. When the GN Missiles hit their targets, they inject GN particles to destroy the enemy within.

Mounted on the Assault Landing unit.

Necessary for underwater operation, it is normally purged upon landing. It is equipped with GN Missiles and GN Beam Guns.

While it is considered a Federation Forces machine, the Federation Forces had already been placed under A-LAWS control when it was developed, and effectively it was used only by special forces led by the A-LAWS. Its pilots were also A-LAWS members or licenses with special privileges. Although it participated in many missions, most of its records are considered secret, and the details are unclear. 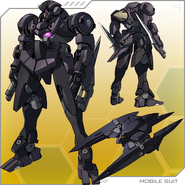 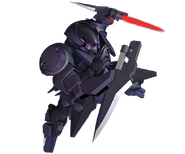 Retrieved from "https://gundam.fandom.com/wiki/GNX-612T/AA_Superbia_GN-X?oldid=449445"
Community content is available under CC-BY-SA unless otherwise noted.