The GNX-611T/G Striker GN-X is a Gunpla appearing in the Gundam Build Fighters: Battlogue. Based on the GNX-604T Advanced GN-X, it is built and piloted by the eldest brother of the Renato Brothers, Mario Renato.[1]

A custom Gunpla with a strong militaristic feel, the Striker GN-X is based on the hard to control but high performance Advanced GN-X from the side stories of Gundam 00 - Mobile Suit Gundam 00V and Mobile Suit Gundam 00V: Battlefield Record.[2][3] It fights in tandem with two ground-based GNX-803T GN-XIV Type.GBF units, also built by Mario, and controlled by his younger brothers, Julio and Serio.[2][3] Together, the three machines form the new Renato Team that is based on the tactical theory of 'heaven, earth and man' which is derived from a Chinese proverb.[1][3]

The settings that Mario created for the Striker GN-X is that it is a test machine created to gather ground combat data for the development of the standard GN-XIV.[1][3] As such, the Gunpla's equipment is meant for combat under gravity, and displays remarkable performance on battlefields with such conditions.[1][3] The silhouette of the Striker GN-X differs greatly from its base Gunpla due to the added armor on various body parts.[4] The additional armor, which resembles a full armor form, is based on Mario’s tactical forecast that prioritized defensive capabilities over mobility during ground combat.[1][3] These added armor (located on the chest, waist, back and include the helmet and left shoulder shield) provides superb protection against ballistic and beams, and can be purged to avoid being a deadweight when damaged.[1][3][5]

The large helmet covering the Gunpla's head has various enhanced sensors for data gathering purposes, as well as embedded clavicle antennae for particle control.[3][6] On the Gunpla's back is a large backpack with high mobility GN verniers, additional particle tanks, and a pair of sub arms for mounting a pair of GN Defense Rods or other option parts.[3][4] In Mario's settings, the backpack's particle tanks are prototype of the GN-XIV's.[3][4] The Striker GN-X also has a GN Discharger on the right shoulder and its main weapon is the large GN Smart Gun.[6]

Mounted in the head, the pair of GN Vulcans fires weak beams at a rapid rate. They are primarily used to shoot down missiles or restrict the movements of an enemy unit. Usable after the helmet is purged.

The manipulators of the GN-X series of mobile suits have sharp tips, and can be used in melee combat when enveloped in GN Field. Serve as a last resort in close combat.

A pair of GN Defense Rods are mounted on the sub arms on the back, and can move semi-automatically.[3][6] These movable shields can be adjusted to various angles, and cause enemy attacks to ricochet off via rotary motions.[3][6]

A melee combat weaponry that uses compressed GN particles to create a beam blade, the Striker GN-X can use a pair of them but their storage location is unknown.[3]

A shield is mounted on the left shoulder and can be purged when not required.[5]

A large handheld gun created via attaching parts to the GNX-603T GN-X's GN Beam Rifle, it is the Striker GN-X's main weapon.[3][6] It has different firing modes such as full-auto and semi-auto, as well as various energy/particle compression rate settings.[3][6] A GN Beam Saber can be emitted from the bottom of the gun's muzzle for close combat use.[3][6]

Mounted on the right shoulder, it is also known as 'GN Smoke Discharger' and fires three special smoke grenades that have particle disruption capabilities.[3][6] Purged after use.

When activated, it enhances the overall performance of the unit three fold for a short time. Can also be used as a self-destruct system by increasing the output beyond the limit.

During a test of the G-quest, a Gunpla battle based attraction, the Renato Team's Gunpla tailed an enemy transport container to find its base. Suddenly, they were attacked by a Cherudim Gundam SAGA Type.GBF carried in the container.

The transport container reached its base, and Serio’s GN-XIV Type.GBF was damagd by the base's Perfect Grade Gundam Exia. Realizing they're outmatched, Mario’s and Julio’s Gunpla retreated back to the jungle and rendezvous with Serio’s Gunpla. After fixing Serio’s Gunpla, Serio’s and Julio’s GN-XIV Type.GBF activated their Trans-Am System to battle the Gundam Exia, which soon activated its own Trans-Am System. Mario’s Striker GN-X then appeared and charged towards the opponent with its own Trans-Am System activated. The collision of two Trans-Am Gunpla destroyed the armor of both units.

The Striker GN-X then tore off the Gundam Exia’s cockpit hatch, revealing a large Setsuna F. Seiei figurine inside. Mario then overloaded the Trans-Am, causing his Striker GN-X to self destruct, taking down the Gundam Exia. The Gunpla Battle ended with the Renatos' victory, and Meijin Kawaguchi III applauded their performance. 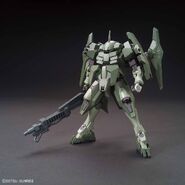 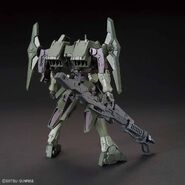 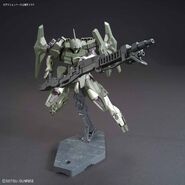 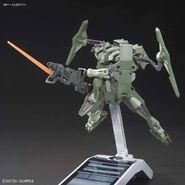