Successor to the GNX-607T GN-XII series, its overall design is similar to the GNX-603T GN-X. The overall weapons and compliments are near identical, however newer MS developments such as an improved GN Drive Tau have lead to higher performance. The GN Particle generators have been further miniaturized and the MS is now equipped with a GN Beam Lance, which doubles as both a melee weapon and beam rifle. The GN Vulcans retain their function to shoot down smaller arms and used as suppressive fire. The GN-XIII can also equip any of the weapons used by its variant GN-X series, allowing the unit to be more versatile and adaptable in MS combat. The thigh has a hidden compartment to store several canisters of anti-beam disruptors to combat against beam weaponry, forcing its opponent to resort to MS melee combat.

While mostly the same unit, there are indeed differences between the Earth Sphere Federation Army and A-Laws version of the mobile suit aside from the color.[2] The ESF version has its Drive set for a standard output meant mainly for fuel conservation purposes while the A-Laws version is custom set by each unit's pilot based on personal preferences.[2][3] There are many GN-XIIIs that use a configuration with slightly higher output.[2] All engineering specifications geared towards equipping original GN Drives that were present in the first GN-X generation have been completely removed.[4]

Despite being a newer machine, Deborah Galiena and Amy Zimbalist have proven that the GNX-604T Advanced GN-X has superior performance to the GN-XIII.

These canisters can release a gas-like particle that renders beam attacks useless. This gives the GN-XIII an advantage, as its primary weapon is a physical GN Lance.

Like its predecessor and successor units, the GN-X III can be equipped with a standard GN Beam Rifle, however this weapon is usually set aside in favor of the GN-Lance.

For melee combat, the GN-XIII is equipped with two GN Beam Sabers which are capable of cutting through just about anything except a GN Field.

A weapon carried over from its predecessor, it is a melee weapon that utilizes GN particles to enhance the cutting ability of the mobile suit's claw like fingers.

The GN-X III's main weapon, developed from the Advanced GN-X's Proto GN Lance, it functions as both melee-to-mid range weapon. The weapon is comprised of a GN particle enhanced Lance and an integrated GN Beam Rifle. The lance is easily capable of damaging or destroying most contemporary threat units, but it cannot equal the effectiveness of a GN-Blade or GN-Beam Saber and can be destroyed by one. As a gun, the unit has two settings for firing, a pulse setting for singular blasts and a gatling setting for suppressive firing and against multiple targets.

Another weapon carried over from its predecessor, the GN Vulcan guns sacrifice power for rate of fire and are not particularly useful in anti-MS combat. Their primary function is the interception and destruction of incoming missiles and to lay down a suppressive field of fire utilizing its high rate of fire.

A grenade that is designed to electrically shock and disable the MS pilot. It separates in half after being thrown, but will be still held together by wires, and releases a conductive particle field that stuns and shocks anything within the particle cloud. The only way to disable the weapon is by cutting through the wires, this will pacify the particle cloud and allow the pilot to escape.

A special bazooka that can fire either non-GN missiles or GN missiles. The launcher was designed to fire against targets under conditions where particle beam weaponry is ineffective. They're best used underwater, against slow moving targets, and within anti-particle fields. The "NGN" stands for Non-GN or Non Gundam Nucleus.

The same sword as used by the GNX-607T/AC GN-XII Sword, the GN Buster Sword is a physical blade that uses GN particles to increase its keenness. In addition to its offensive capabilities, it can deploy a GN Field to act as a defense mechanism. Appears on a customized Gunpla used by a Avalon force member in Gundam Build Divers.

Four years after Operation Fallen Angels, the newly formed Earth Sphere Federation created the GN-XIII, after its prototype model and the GNX-607T GN-XII. The most striking difference between the GN-XII and GN-XIII is the absence of the large fin-like binders from the shoulders and chest.

While GN-X was the progenitor of the line, and the GN-XII explored specialization via modular additions, the GN-XIII is a much more general purpose machine. Construction is simplified from previous models and the weapons selection is a simple but reliable mix.

The GN-XIII would continue to serve the Federation, A-Laws and Coup faction even after the introduction of newer mobile suits such as the GNX-704T Ahead. The GN-XIII performed greatly against the older non-GN Drive powered mobile suit used by Katharon. However this was not the case when the GN-XIII engaged Celestial Being's newer generation of Gundam units. As of AD 2312, there are a total of over 1000 units of GN-X IIIs from Earth Sphere Federation Army and A-Laws combined,[6] however by the year AD 2314 many of them have been converted/upgraded into GNX-803T GN-XIVs.[5]

In AD 2314 the Colony Public Corporation were given GN-XIIIs, presumably by the previous government. The corporation deployed three yellow-colored GN-XIIIs in an attempt to assassinate Marina Ismail. The three units were defeated by the CBNGN-003 (SVMS-01AP) Union Flag Celestial Being Version piloted by Setsuna F. Seiei before they could successfully destroy Marina's shuttle.

Several GN-XIIIs in ESF colors are seen in the final battle against the ELS, although they suffer heavy losses against the ELS GN-XIVs. The GN-XIIIs were seen deployed alongside the newer GN-XIV and other older mobile suits such as the MSJ-06II-E Tieren Space Type. 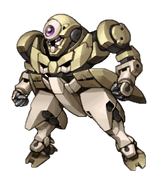 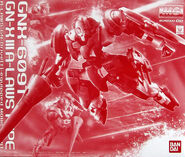 Retrieved from "https://gundam.fandom.com/wiki/GNX-609T_GN-XIII?oldid=457902"
Community content is available under CC-BY-SA unless otherwise noted.