Developed by the UN Forces, the GN-XII is the successor of the GN-X.[1][2][3][4] In the GN-X series, newly developed machines are not completely brand new, but retrofits of existing units.[5] Thus, the GN-XII units are mostly created by upgrading existing GN-X units through parts swapping.[5] The GN-XII also incorporated data from the GNX-604T Advanced GN-X, and has hardpoints on its shoulders and waists for mounting weapons.[2][3][6][7] Another feature of the GN-XII is that the GN Particle Generators on its chest and waist, which are for controlling GN Particles, have been miniaturized compared to those of the GN-X.[1][2]

Using the operating data from Team Trinity's Gundam Thrones as a reference, variations of the GN-XII with different equipment were created for a variety of missions and situations.[1][2][3][4] Despite their differences, the GN-XII and its variants can work cooperatively in battles.[1][2][6] For example, the GN-XII and GNX-607T/BW GN-XII Cannon can shoot from close and long range respectively at the enemy, whose movement is restricted by the close combat specialized GNX-607T/AC GN-XII Sword.[8] The GN-XII is later upgraded into the GNX-609T GN-XIII, which retains the hardpoints system.[2][4][5]

The GN-XII's primary handheld ranged weapon, it is the same GN Beam Rifle as used by the GNX-603T GN-X.[8][9] Meant for rapid fire at close range, the GN Beam Rifle has higher destructive power than physical projectile weaponry used by conventional mobile suits, and its performance is on par with the Gundams' beam weaponry. To reduce its reliance and consumption of GN Particles from the GN-XII's GN Drive Tau, which can only produce a finite amount of particles, the rifle is installed with a large GN Condenser that is filled with particles prior to launch.

Mounted on the left forearm, it is the same defensive armament as used by the GN-X.[8][9] Made of highly durable E-Carbon, the GN Shield is also equipped with a Defense Rod at the center, and can a deploy a GN Field on its surface to achieve high defensive capability.

Like the GN-X, the GN-XII has a pair of GN Beam Sabers.[2][3] This melee weapon emits a beam blade made of GN Particles when drawn. One is stored in each thigh, and when used, the front thigh armor slides down and the saber flips out for grabbing by the GN-XII's hands.

The GN-XII also retains the GN-X's pair of GN Claws.[2][3] These sharp and pointed fingers can be used directly as melee weapons and their destructive power can be increased through the use of GN Field.

As with the GN-X, the GN-XII is equipped with two GN Vulcans in its head.[2][3] These small beam guns have low firepower, but can be rapid-fired intermittently and have high utility value. They are used for restricting enemy’s movements, creating a barrage, shooting down missiles, etc.

A.D. 2309, a UN Forces missile base in Africa was assaulted by an anti-UN group, whose members include the rogue Gundam Meister Fon Spaak, with the intention of taking over the base so that they could negotiate with the UN Forces.

The anti-UN group split into two teams, one team lured away the AEU-09 AEU Enacts and SVMS-01 Union Flags guarding the base, while the other infiltrated the base. This second team was caught off guard when one of their mobile suits was taken out by a long-range beam attack, and it was revealed that the base's guard machines also included a GN-XII, a GNX-607T/AC GN-XII Sword and a GNX-607T/BW GN-XII Cannon. Intelligence obtained by the anti-UN group had earlier indicated that the base did not have any GN Drive Tau-equipped mobile suits due to its low importance, among other reasons. Fon and his GNY-001F2 Gundam Astraea Type F2 then battled against the three units.

As the GN-XII, GN-XII Sword and GN-XII Cannon attack in perfect unity – the GN-XII and GN-XII Cannon shooting from close and long range respectively, while the GN-XII Sword restricted the Astraea Type F2's movement through close combat – Fon had a hard time fighting them off. With the three GN Drive Tau-equipped mobile suits occupied by Fon and his Astraea Type F2, the other members of the second team rushed towards the base. The GN-XII then left the battle with Astraea Type F2 to stop them, and end up fighting a SVMS-01SG Union Flag Ground Package Shell Type.

When the pilot of the Union Flag Ground Package Shell Type was informed by his companion who had entered the base that this was all a trap, that there was no missiles, only old rockets left behind from the construction of the Orbital Elevator, he lost the will to fight. The GN-XII closed in to deal the final blow, but was destroyed by a GN-XII Sword's GN Buster Sword thrown by Fon's Astraea Type F2. The anti-UN group eventually won the battle. Fon had anticipated the trap, and was after the base's old rockets all along, which he then used to blast off into space with his Gundam.

Months later, around AD 2311. Fon and his Astraea Type F2 attacked a manufacturing facility in space belonging to the UN Forces to acquire resources for his new plan. The facility launched all its GN-XII units to stop Fon, but they were all defeated. 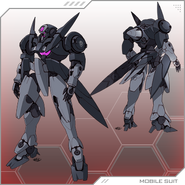 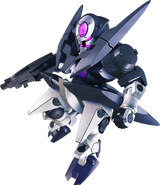