A variant of the GNX-607T GN-XII, the GN-XII Cannon is created using operating data from the Team Trinity's Gundam Thrones and specializes in long-range bombardments.[1][2][3][4] Its signature weapon is the GN Cannon on the right shoulder, and when required, another GN Cannon can be mounted on the left shoulder as well.[1][2][3][5]

The GN-XII Cannon also has a unique head unit with a central high precision camera dedicated for shooting that is surrounded by four standard GN-XII's head cameras.[1][2][3][5] Additionally, the central camera's sensors have similar parts as the CBY-077 GN Cannon's head sensors, indicating that the Innovators may have leaked some of the mobile suit's technology.[6][7][8][9] Aside from these changes, the GN-XII Cannon retains the other features of the normal GN-XII.

Mounted on the right shoulder hardpoint, it is the GN-XII Cannon's main armament, and is implied to be developed using weapon technology from GNW-001 Gundam Throne Eins.[1][3][8][9] As the GN Cannon is for long-range bombardments, it has longer attack range and higher output than the GN-XII's GN Beam Rifle.[10][11] When required, another GN Cannon can be mounted on the left shoulder hardpoint for a double cannon configuration.[1][2][5]

Like the GNX-607T GN-XII, the GN-XII Cannon has a pair of GN Beam Sabers.[3][12] This melee weapon emits a beam blade made of GN Particles when drawn. One is stored in each thigh, and when used, the front thigh armor slides down and the saber flips out for grabbing by the GN-XII Cannon's hands.

The GN-XII Cannon has a pair of GN Claws like the GN-XII.[3][12] These sharp and pointed fingers can be used directly as melee weapons and their destructive power can be increased through the use of GN Field.

Although the GN-XII Cannon's head unit has a different design from that of the GN-XII, it still retains the two GN Vulcans.[3][12] These small beam guns have low firepower, but can be rapid-fired intermittently and have high utility value. They are used for restricting enemy’s movements, creating a barrage, shooting down missiles, etc.

A.D. 2309, a UN Forces missile base in Africa was assaulted by an anti-UN group, whose members include the rogue Gundam Meister Fon Spaak, with the intention of taking over the base so that they can negotiate with the UN Forces.

The anti-UN group split into two teams, one team lured away the AEU-09 AEU Enacts and SVMS-01 Union Flags guarding the base, while the other infiltrated the base. This second team was caught off guard when one of their mobile suits was taken out by a long-range beam attack from the GN-XII Cannon, which was accompanied by a GNX-607T/AC GN-XII Sword and a GNX-607T GN-XII. Intelligence obtained by the anti-UN group had earlier indicated that the base did not have any GN Drive Tau-equipped mobile suits due to its low importance, among other reasons. Fon and his GNY-001F2 Gundam Astraea Type F2 then battled against the three units.

Eventually, Fon and his Astraea Type F2 took out all three GN Drive Tau-equipped mobile suits. The anti-UN group won the battle, but this was a trap all along; the base did not contain any missiles, only old rockets left behind from the construction of the Orbital Elevator. However, Fon had anticipated the trap and was after the rockets, which he then used to blast off into space with his Gundam. 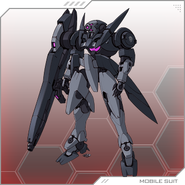 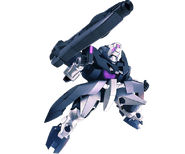 Retrieved from "https://gundam.fandom.com/wiki/GNX-607T/BW_GN-XII_Cannon?oldid=496048"
Community content is available under CC-BY-SA unless otherwise noted.