During combat, the GN-XII Sword can work cooperatively with other GN-XIIs.[1][6][7] It has been deployed in a three unit team, where it restricts the enemy machine's movement using close combat, while the GN-XII and GNX-607T/BW GN-XII Cannon shoot from close and long range respectively.[7] It can also partner with the GN-XII Cannon, providing defense as the latter shoots at the enemy.[7]

A large solid sword on trial with the GN-XII Sword, it is the mobile suit's primary weapon and is stored on the left shoulder hardpoint when not in use.[1][7][8][9] The GN Buster Sword is implied to be developed using weapon technology from GNW-002 Gundam Throne Zwei.[10][11] A GN Field can be generated on the GN Buster Sword's surface, this not only grant the weapon high cutting capabilities, but also allow it to be used as a shield.[2][3][7][9] A GN Buster Sword obtained by Fon Spaak from a defeated GN-XII Sword was eventually passed to Ian Vashti, who then used it as a reference to develop the GN-0000/7S 00 Gundam Seven Sword.[1][2][7]

Like the GN-XII, the GN-XII Sword has a pair of GN Beam Sabers, one stored in each thigh.[3][12][13] The GN Beam Saber emits a beam blade made of compressed GN Particles when drawn.[13][14] Besides having extremely high power, the absence of a blade when stored ensures that the weapon does not cause any obstruction during missions.[13] On the flip side, its power can be weakened due to atmospheric conditions as well as beam diffusion; it is also incapable of certain feats only possible with a physical blade, such as using the blade to press against the enemy.[13]

Unique to the GN-X series of mobile suits, they can use their razor sharp fingers as close combat weapons.[3][12][13][14] Furthermore, via the field effects of the GN Particles, the GN Claw can have high destructive power.[13][14]

Although the GN-XII Sword's head unit has a different design from that of the GN-XII, it still retains the two GN Vulcans.[3][12] They are small-caliber beam guns with low attack power, but have rapid-fire capability.[13][14] Used for restricting enemy's movements, laying suppressive fire, intercepting missiles, etc.[13][14]

A.D. 2309, a UN Forces missile base in Africa was assaulted by an anti-UN group, whose members included the rogue Gundam Meister Fon Spaak), with the intention of taking over the base so that they can negotiate with the UN Forces.

The anti-UN group split into two teams, one team lured away the AEU-09 AEU Enacts and SVMS-01 Union Flags guarding the base, while the other infiltrated the base. This second team was caught off guard when one of their mobile suits was taken out by a long-range beam attack, and it was revealed that the base's guard machines also included a GN-XII Sword, a GNX-607T/BW GN-XII Cannon and a GNX-607T GN-XII. Intelligence obtained by the anti-UN group had earlier indicated that the base did not have any GN Drive Tau-equipped mobile suits due to its low importance, among other reasons. Fon and his GNY-001F2 Gundam Astraea Type F2 then battled against the three units.

The anti-UN group eventually won the battle. This was a trap all along; the base did not contain any missiles, only old rockets left behind from the construction of the Orbital Elevator. However, Fon had anticipated the trap and was after the rockets, which he then used to blast off into space with his Gundam. 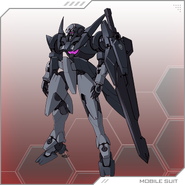 Retrieved from "https://gundam.fandom.com/wiki/GNX-607T/AC_GN-XII_Sword?oldid=406860"
Community content is available under CC-BY-SA unless otherwise noted.