Initially, only 30 GNX-603T GN-X were produced, but more units were manufactured after the United Nation Forces' (UN Forces) victory over the Celestial Being.[1][2][3][4] These newly made GN-X are known as the late production type and they played a significant role as the world unifies, battling forces that were against the disbandment of each nation's military that was part of the unification process.[1][2][3][4] It was during this period that the GNX-604T Advanced GN-X was developed based on requests from the battlefields.[1][2][3][5] An improved version of the late production type GN-X, the Advanced GN-X is a custom machine mainly provided to the UN Forces' ace pilots and produced in limited numbers, constituting less than 3% of the GN-'s overall production run.[1][5][6][7]

Appearance-wise, the Advanced GN-X's basic structure is almost the same as the GN-X's, except for changes to the head, shoulders and thighs.[1][2][3] The added compound antenna on the head improves the mobile suit's search and communication abilities, as well as enable the control of GN Drive Tau-type mobile suits under its command.[1][2][3] Its shoulders are improved with mount latches on the outward-facing sides, increasing the variety of armament that could be equipped and enhancing the mobile suit's versatility.[1][2][3] Its thighs have added GN Verniers for better mobility, but this also resulted in the removal of the GN-X's GN Beam Saber storage racks.[1][2][3] The thrust output throughout the entire mobile suit is also increased and all its GN Verniers are enlarged.[1][2] With this enlargement of the verniers, the ability to control the mobile suit through the GN Particles is also enhanced.[1][2] However, this increases the burden on the pilot and makes controlling the Advanced GN-X harder.[1][2]

Despite its limited production run, the Advanced GN-X boasted an extremely high mission accomplishment rate on the battlefield.[1][3][5][8] This is because the mobile suit can be tuned to match the various characteristics of its pilot, maximizing the pilot's abilities.[1][3][5][8] For example, the Advanced GN-X piloted by Amy Zimbalist has its internal settings altered, resulting in the disabling of all its vernier systems' safety limiters and this causes it to move wildly around the battlefield like a runaway horse.[1][2][3] Generally, such an unstable machine is incapable of effective combat, but Amy has no issue controlling his Advanced GN-X and this led to his nickname of "Steel Cowboy".[1][2][3] Data obtained from the Advanced GN-X was used in the development of the GNX-607T GN-XII, and the Proto GN Lance, a new weapon adopted by the Advanced GN-X as a trial, was subsequently utilized by the GNX-609T GN-XIII.[1][2][3][8]

With the GN-X later acquiring the name of "GN-X I", the Advanced GN-X can be said to be the equivalent of "GN-X 1.5".[1][2] As with other GN-X series machines, it is possible to upgrade the Advanced GN-X to newer GN-X model through parts swapping.[9] However, the combination of its pilot's skills with the pilot-specific customizations of the Advanced GN-X makes it possible for the mobile suit to outperform newer machines in certain scenario.[2][10] This was shown when a test conducted years after the Advanced GN-X's introduction revealed that not only was it capable of outperforming the GN-XIII, its test result is also superior to the new mass production mobile suit succeeding the GN-XIII.[2][10]

Attached to the mount latches on each shoulder, the GN Defense Rod is a modified, enlarged version of the Defense Rod equipped on the GN-X's GN Shield.[1][2][3] A common configuration for the Advanced GN-X is to have two GN Defense Rods, but according to the pilot's characteristics and mission objectives, other equipment such as the GN Mega Launcher can be attached to the mount latches in place of the GN Defend Rod.[1][2][3]

Like the GN-X, the Advanced GN-X has a pair of GN Vulcans mounted in its head.[1][2] These small beam guns have low firepower, but can be rapid-fired intermittently and have high utility value. They are used for restricting enemy's movements, creating a barrage, shooting down missiles, etc.

Besides the GN Vulcans, the Advanced GN-X also retains the GN-X's GN Claws.[1][2] These sharp and pointed fingers can be used directly as melee weapons and their destructive power can be increased through the use of GN Field.

The same long-barreled beam rifle as used by the GN-X.[2][10] Meant for long-range shooting and sniping, it was wielded by the GNX-604T Advanced GN-X [Deborah Galiena Use] during a test.[2][10]

A commander-use compound antenna mounted on the head.[1][2][3][11] Besides enhancing the mobile suit's search and communication abilities, it also has a special function that enables the control of mobile suits under the Advanced GN-X's command.[1][2][3][11] The existence of this system shows the UN's cautious attitude towards powerful weapons such as GN Drive Tau-type mobile suits.[1][2][3][11]

For the Advanced GN-X's history and exploits, please go to Amy Zimbalist and Deborah Galiena's page.

A customized, pink-colored Advanced GN-X piloted by Deborah Galiena.[3][7] Besides the change in color scheme, the mobile suit is also tuned to match Deborah's characteristics.[3][8][12] 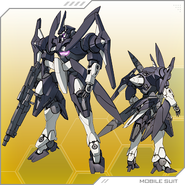 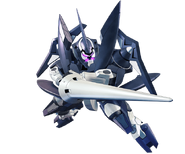