The GNX-603T GN-X (aka GN-X (often pronounced as jinx)) is a mass production mobile suit used by the United Nations Forces in season 1 of Mobile Suit Gundam 00.

In AD 2308, the GN Drive Taus used were provided by Corner Family who betrayed Celestial Being, while parts needed to make the GN-X were secretly manufactured in separate civilian factories across the world before having them sent up to the Orbital Elevators for full assembly by their respective blocs.[1] The GN-X's tech itself was evolved from beta testing GNX-509T Throne Varanus, which used mobile suit data from the Gundam Throne series; the overall tech was based on reversed engineered Celestial Being GN-tech. Being mass production MS, the GN-X units are actually less formidable compared to their Gundam counterparts (each unit is inferior to a 3rd Generation Celestial Being Gundam),[1] however this weakness is overcome by the group tactics that are often employed by their pilots. This is seen when a group of 10 GN-X units engaged in combat with Team Trinity to the point where Team Trinity were forced to retreat on three consecutive occasions.

A unique quirk about the GN-X is its cockpit: unlike other mobile suits of the era, the GN-X cockpit is located in the front of the waist. The main reason for this was because the parts required to control the Tau Drive was too large and did not allow a cockpit in the chest.[1] A total of 30 were made, 10 to each of the world powers (AEU, HRL, and the Union). The first generation GN-X was manufactured even after Celestial Being's defeat but only for a short time.[2] The GN-X was developed into the short lived GNX-607T GN-XII, and eventually the GNX-609T GN-XIII was created and it serves as the mainstay Earth Sphere Federation mobile suit, replacing most of the previous generation GN-X series by AD 2312.

The GN-X has reinforced visual analysis in its four eyes to counter the troublesome GN Particle disruptions.[1] In addition to this, it was also equipped with computers primarily used for analysis hidden within the oval-shaped part at the head's center. One of their most important functions is to bridge the differing piloting styles between the pilots of differing blocs.[1] The four large protrusions on the suit's shoulder and waist that collectively form a "X" are GN Particle Generators, they are used for particle control and not particle generation like their name suggest. These devices are actually an improved and redesigned version of the clavicle antennas used by the Gundams.[1] They are used to accommodate pilots who are used to piloting conventional non-GN mobile suits and alterations were made in future generation models to reduce their size.[1] As the devices can be used to stabilize MS during aerial melee combat, the Union's mobile suit development team incorporates them into the GNX-U02X Masurao as well as subsequent MS that they design.[1]

An interesting note about the first generation GN-X is that they were designed to have been used with original GN Drives; this was done because the Corner Faction's original plan is to manufacture original GN Drives that were exactly identical to the units made by Celestial Being. However, after their failure to manufacture the drives due to their inability to replicate to the special core it uses, they settled on an inferior version of their own without said core, which is known as the GN Drive Tau.[1] Like other machines equipped with a GN Tau Drives at the time, the poisonous nature of its beam attacks is due to its beam compression rates.[1] Despite the change from original plan to use Original GN Drives, the GN-X still retained a few engineering traits meant to be used with the original GN Drives, however were completely removed by the time the GN-XIII line was developed.[1] There were also improvements to its GN Drive Tau performance by this generation, so it was decided that that the Original GN Drives were completely unnecessary at this point.[1]

Unlike the Gundam Thrones used by the Trinities, the GN-Xs lack the ability to activate their GN-Drives on their own. Instead, they require a special start-up machine located at their bases in order to recharge and activate their Drives.[3]

In the future generations of the GN-X series, it becomes the norm that each new generation is created by upgrading the existing units of the previous generation (example: GN-XIIIs are upgraded into GN-XIVs).[4]

The standard armament of the GN-X. The GN Beam Rifle can fire rapid beam shots, just like the one Gundams use, and is equipped with a GN Condenser to lessen the drain on the GN Drive Tau.[5] Initially, they were observed to be strong enough to nullify Virtue's GN Field with a single shot[6] though were no longer able to do so after Tieria reconfigured the GN Field to use higher compression rates in a later battle.[7][8]

The GN Beam Rifle with an optional long barrel attachment. The barrel attachment's function is to increase the effective range of the weapon, however at the cost of slower firing rate and without any improvements to firepower.[5]

For melee combat, the GN-X is equipped with two beam sabers which are capable of causing a lot of damage even to the GN Full Shield of GN-002 Gundam Dynames but not a GN Field. Like other GN Beam Sabers, their power can be hampered by atmospheric conditions as well as beam diffusion methods.[1]

Designed by combining the Gundams' GN Field technology with the older Defense Rod technology, these shields are capable of creating a micro GN Field for defense. The defense rod is part of the shield as Union and AEU's pilots are skilled in using them. The shield was designed to not only to defend against solid projectiles but beam attacks as well.[1] Despite this however, during the final battle against Celestial Being's Gundams, their effectiveness was somehow nullified.[1]

Mounted in the head, they have low power output, but a high firing rate. Primarily used to shoot down missiles or restrict the movements of an enemy mobile suit. GN-X pilot Soma Peries demonstrated that the GN Fangs that GNW-002 Gundam Throne Zwei uses can be destroyed by the GN-X's GN Vulcan.

Used only by the GN-X series of mobile suits, it utilizes GN particles to enhance the cutting ability of the mobile suit's claw like fingers. It is mainly used as a last resort in close combat.

It was first used after the AEU, HRL, and Union made a military pact and formed the United Nation Forces. Not long after, the GN-X Squad, led by Sergei Smirnov and Soma Peries, debuted the GN-X in battle against the Team Trinity's Throne Gundams in the HRL Guangzhou Base and forced them to retreat. The UN Forces then began Operation Fallen Angels: a two-stage operation to destroy the Gundams, with the Human Reform League's Chobu Squadron in pursuit of the Thrones on Earth while 19 units from the AEU and Union attacked Celestial Being in space.

When up against the Celestial Being Gundams, the power of the GN-X units combined with their superior numbers and the skill of their pilots were able to overwhelm the Third Generation Gundams and the Meisters; however, they were no match for the Gundams' Trans Am system. The majority of the GN-Xs were all eventually eliminated by the Meisters, with only Smirnov, Peries, and Colasour's units remained, albeit heavily damaged.

The GN-X was eventually mass-produced and in AD 2312, its successor, the GNX-609T GN-XIII, served as the Earth Sphere Federation Army's main mobile suit.

A blue and white Gunpla variant seen in Gundam Build Fighters Try and used by Team Gaia Dragon. Its distinctive weapon is a double beam saber.

A white and red Gunpla variant seen in Gundam Build Fighters Try and used by Team Gaia Dragon. Its distinctive weapon is a GN Buster Sword originally used by GN-XII.

A green and white Gunpla variant seen in Gundam Build Fighters Try and use by Team Gaia Dragon. Its distinctive weapon is a beam bow originally used by the Rising Gundam.

Head close up (side) 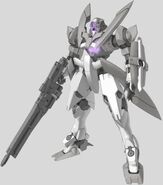 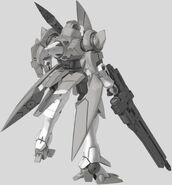 Retrieved from "https://gundam.fandom.com/wiki/GNX-603T_GN-X?oldid=469545"
Community content is available under CC-BY-SA unless otherwise noted.