The GNX-509T Throne Varanus (aka Throne Varanus, Varanus) is a mobile suit developed from the Team Trinity's Gundam Throne series. Featured in Mobile Suit Gundam 00V, it is piloted by Deborah Galiena.

The Throne Varanus's design concept is based on improving operability, and a significant difference with the Gundam Thrones is the four protruding GN Particles Generators located above the chest and on the sides of the hips.[2][5] These devices simplify the GN Particles-based control of GN Drive-type mobile suit, allowing pilots from various nations who have never operated such machine to be deployed for combat after a brief training.[2][3][5] The Throne Varanus also underwent repeated adjustments to ensure ease of operability, and it is for the same reason that it adopted standardized armaments.[2][3][5] It is thought that the data collected by the Throne Varanus's test pilot, Deborah Galiena, and her suggestions on further improvements also contributed to the smooth operation of the GN-X by the UN Forces's pilots.[2][5]

A handheld firearm that is the prototype of the GNX-603T GN-X's GN Long Barrel Beam Rifle.[2][5] Parts of the GN Long Barrel Rifle such as its GN Particles supply system, sensors, etc, are the same as those of the GNW-001 Gundam Throne Eins.[2][5][7]

The Throne Varanus stores a GN Beam Saber on top of its right knee armor.[2][5] When used, this close combat weapon is handheld and emits a beam blade made of GN Particles.

A small gun mounted under the left forearm, it is an improved version of the GNW-002 Gundam Throne Zwei and GNW-003 Gundam Throne Drei's GN Handgun.[2][5][8][9] Despite having low firepower, the GN Chain Gun has a wide range of applications such as restricting the enemy's movements.[2][5] A similar weapon is present in the GN-X's head - the GN Vulcans.[2][5][7]

Mounted on the left shoulder, it is a defensive armament that combines a Defense Rod with the GN Field.[2][5] Many pilots are adept user of the Defense Rod as it is an existing armament of the Union and AEU.[2][5] The GN-X's GN Shield is a refined version of the Throne Varanus's GN Defense Rod and can also function as a normal shield.[2][5][7]

A shield mounted on the right shoulder, it is almost identical to the Throne Eins's GN Shield.[2][5][10] The Throne Varanus's GN Shield also functions as a GN Condenser, supplying GN Particles to the GN Long Barrel Rifle.[2][5]

GN Particle Generators refer to the large, back-slanting devices mounted above the chest and on the sides of the hips; similar devices are also equipped by the GNX-603T GN-X.[2][3][5][6] These devices do not generate GN Particles despite their name, instead they are enhanced, redesigned version of the antennas used by the Gundams for controlling GN Particles, and can also emit these particles in a thruster-like manner.[3][6] Developed for pilots inexperienced in operating GN Drive-type mobile suit, they simplify the control of the GN Particles surrounding the machine, thereby enabling stable control of the machine.[2][3][5][11] With the GN Particle Generators, these inexperienced pilots can be deployed for combat after a brief training.[2][5] The two GN Particle Generators mounted above the Throne Varanus's chest resemble the ones adopted by the GN-X, while the hip-mounted, wing-shaped GN Particle Generators are the same as those on the Trinity Mothership and the Gundam Thrones's "Turbulenz" high mobility equipment.[2][5] This second design is dropped from the GN-X due to its complexity.[2][5]

UN's mobile suit test pilot, Deborah Galiena, was invited to a secret facility by her colleague, the UN ambassador Alejandro Corner.[2][5] However, she felt uneasy and requested to be accompanied by her friend, Robert Spacey; Alejandro agreed and led them personally to the facility.[2][5] In that place, Deborah and Robert saw the Throne Varanus.[2][5] At that time, the GNX-603T GN-X was yet to be developed, so Robert's first impression of the Throne Varanus was that it was the fourth Throne series unit.[2][5]

To the confused Deborah and Robert, Alejandro revealed the shocking truth: he is a member of Celestial Being, but would be betraying the organization soon for righteousness.[2][5] To that end, the Throne Varanus was prepared for the upcoming confrontation against the Gundams.[2][5] Alejandro then asked Deborah to be the mobile suit's test pilot so as to facilitate its mass production.[2][5] Deborah's job in the UN involved inspecting the military equipment of member nations, and as a result, she is proficient in operating all the power bloc's mobile suits.[2][5] Therefore, having her as the test pilot would allow the development of a mobile suit easily operable by pilots all over the world.[2][5]

Deborah agreed to help and Robert assisted in recording the test data; both of them were delighted to play their part in achieving world peace.[2][5] However, this belief of theirs came crashing down one day.[2][5] That day, Alejandro's private secretary, Ribbons Almark, suddenly revealed that Alejandro planned on conquering the world and wondered if they can stand being made use of.[2][5] Deborah and Robert were dumbfounded, but they could not ignore what they have heard (story continues in Mobile Suit Gundam 00V Vol.008).[2][5] 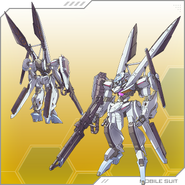