The Arche Gundam Drei is a mobile suit for Nena Trinity that only existed in data form, and is a combination of the Gundam Throne Drei and the Arche Gundam.[1] Its frame is mostly derived from GNW-20000 Arche Gundam, thus it also has a Core Fighter that can function as an escape unit, but its head is switched to a dome-type similar to the Throne Drei.

Like the GNW-003 Gundam Throne Drei, Arche Drei is designed for support and has a large backpack unit for deploying the GN Stealth Field. However, all its abilities, including combat power, have been greatly improved when compared to the former. The suit is armed with a pair of GN Fangs (one in each side skirt armor) and an arm-mounted GN Handgun, which has a GN Beam Saber Mode for close combat.[1]

It was envisioned that if Arche Drei is to battle Arche, its GN Stealth Field would have disrupt the Arche's communications, radar, beam composition and even usage of the GN Fangs.[1] This would have left the Arche with only its GN Buster Sword and line-of-sight against an unhindered Arche Drei, which is free of these problems as it can control the density of the GN particles around it.[1]

The Arche Drei features a GN Handgun mounted on the right forearm. Unlike the GN Handguns utilized by the Thrones, the Arche Drei's GN Handgun has a GN Beam Saber Mode for close combat. In this mode, the beam blade emitter mounted at the bottom will fold forward to generate the GN Beam Saber.

The Arche Drei features two GN Fangs, one in each side skirt. The GN Fangs have similar design as the one used by Arche Gundam.

Like the Gundam Throne Drei, the Arche Drei's backpack and its associated vents can open and release all the stored GN particles to deploy the GN Stealth Field. The Arche Drei's GN Stealth Field blankets an area with GN particles, this not only disrupts communications and radar like the Throne Drei's, but is also capable of disrupting sensors, GN beam composition, and even control of GN Fangs. Arche Drei itself will not be affected as it can manipulate the density of the particles around itself, and hence can use its GN beam weapons and sensors without any problem. However, since the Arche Drei was never made, it was unable to test this system.

While trying to find ways to avenge her dead brothers, Nena Trinity came into contact with Regene Regetta, who offered this unit to help her. Regene made this offer as he wanted to oust Ribbons Almark and viewed Ali as an obstacle in his plan. However, the unit was never built and existed only in data and concept. 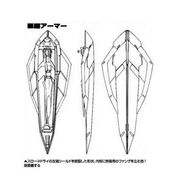 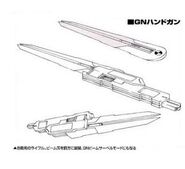