The Jagd is a solo heavy assault configuration for Arche Gundam, which fully combines the equipment of all of the Throne Gundams into a single unit, similar to the Turbulenz pack. Its primary combat strategy is to isolate the enemy using the Stealth Field, bombard from range with the GN Launcher, and then tear them apart at close range in the resulting confusion. Because of the decrease in mobility due to the added weight, it is only used to fight large groups, rather than a small force such as Celestial Being.

An enhanced version of Gundam Throne Zwei's GN Buster Sword. In the Jagd Arche, two of these weapons are carried on the backpack.[1] Like the Zwei's, the Arche's GN Buster Sword is a large sword that has the traits of both physical and beam sword due to the use of GN particles. It also stores GN particles, and these particles can be released during use to increase the sword's weight and hence destructive power. Where the Arche's GN Buster Sword departs from the Zwei's is that it is longer and contains a GN Rifle. When used as a rifle, the sword exposes a handlebar (for stability and handling) and splits open in the middle to reveal the gun.

Jagd Arche's GN Fang Container is an enlarged version of the standard Arche's, they can hold GN Missiles instead of GN Fangs[1] and also contain the emitters for the GN Stealth Field.[1]

Arche's GN Fangs are enhanced/improved versions of the original GN Fangs, similar in design but sporting overall higher capabilities. They are faster, highly maneuverable, and have stronger beams than the originals. Like their predecessors, the GN Fangs are equipped with a beam emitter each that can fire beam shots or emit a short beam blade. Jagd Arche is equipped with 12 GN Fangs, 2 more than the standard Arche.

Two beam sabers are concealed inside the toe portion of the Jagd Arche's feet, they allow Ali to engage multiple opponents in close combat simultaneously.

A high-power, long-range beam weapon mounted on the right side of the backpack, it is an enhanced version of Gundam Throne Eins' GN Launcher and is capable of destroying a mobile suit with a single shot. Because the GN Launcher is mounted on the backpack, it has a limited firing arc compared to a hand mounted weapon such as Eins' GN Beam Rifle or Gundam Dynames' GN Sniper Rifle. Given enough energy, the Jagd Arche would be able to use the GN High Mega Launcher Mode on its own,[1] however it is not clear at this point whether that it could be done or not.

Like the core fighter of the mobile suits used by Innovators, Jagd Arche's core fighter serves normally as the suit's backpack and as an escape unit in times of danger. It is connected to the suit's cockpit module and the head unit. It does not contain the suit's solar furnace and instead uses a GN Condenser for propulsion when detached from the suit.

By releasing the stored GN particles from the concealed vents on the front and back of the GN Fang Containers, the Jagd Arche can deploy the GN Stealth FIeld. The GN Stealth Field blankets an area with GN particles, disrupting communications and radar. Jagd Arche uses it to isolate the enemy units and disrupt their coordination.

The Jagd Arche Gundam was created to fight against a large force like Katharon instead of a smaller force like Celestial Being. The Jagd Arche Gundam suddenly appears when the Federation troops, which includes Deborah Galiena and her personal GNX-604T Advanced GN-X, is trying to destroy a Katharon force stationed in a town and indiscriminately attacks both sides. Deborah survived this deadly encounter due to her MS running out of power. 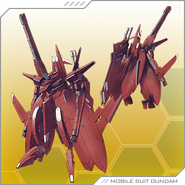 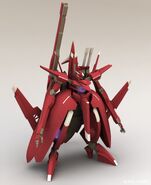 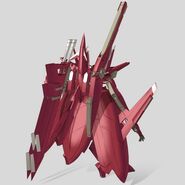 Retrieved from "https://gundam.fandom.com/wiki/GNW-20000/J_Jagd_Arche_Gundam?oldid=454169"
Community content is available under CC-BY-SA unless otherwise noted.