The GNW-100P Gundam Portent (aka G-Portent) is a Gunpla from Gundam Build Fighters Try. It is built and piloted by Shia Kijima.

An original Gunpla built by Shia Kijima, it is created in the image of the Gundams used by Celestial Being. Its build quality is on par with the other two Gunplas used by team Celestial Sphere, and was even described by Coach Allan as 'perfect'. Due to Shia's excellent control skills, the Gundam Portent can fight in ways that no other Gunplas can. For example, it can touch missiles lightly without detonating them and can render enemy's beam attack harmless using a particle transformation field. The latter can also be deployed as a 360 degree barrier or a single plane energy shield against enemy attacks.

The wing-like parts on the legs, arms and back are basically enlarged version of the clavicle antennae used by Celestial Being's Gundams, and their larger size as well as higher number lead to vastly improved control over the GN particles released from the suit's back. Weapon wise, it is equipped with a pair of GN Vulcans, a pair of Beam Sabers, a GN Smash Rifle and a GN Pierce Sword. The suit's most unique equipment is the small machines known as Karels that are stored in the container on the back of the waist. These machines are capable of repairing the suit or one of its teammates during battle, and allows it to recover from even critical damages.

Mounted on the sides of the suit's head, the pair of GN Vulcans are smaller versions of GN Beam weaponry. They have a high rate of fire, but are low in power. As such, they are mainly used to engage targets in a defensive capacity or to intercept incoming attacks, such as missiles.

A custom GN beam rifle used by Gundam Portent, it has high accuracy due to the suit's excellent control of GN particles.

The suit's main handheld close combat weapon, its blade is covered with Plavsky particles that recreates the effect of GN particles and this grants it high cutting capabilities. The GN Pierce Sword can emit a long flexible beam blade to increase its attack range. This beam blade can be used together with the GN Smash Rifle to enhance the suit's ranged attack power.

A sword-like beam weapon that serve as the suit's secondary close combat weapon, a pair of them are stored on the rear waist armor in a manner similar to that of the Gundam Astraea.

A special field that allows the suit to slide on enemy's beam harmlessly, it can also be deployed as a GN Field-like defensive barrier for blocking enemy's attack, but it can be penetrated/shattered by a physical object with lots of force behind it or by powerful beam attack. However, the field can be deployed as a single plane energy shield of varying size to overcome the first weakness, but it is still vulnerable to the second. It is unclear how the particle transformation field works, but it is hinted in the anime that its abilities are related to the particle band of the Plavsky particles.

Stored in the container mounted on the rear waist, it is a small machine that is used for repairing the Gundam Portent or one of its teammates during Gunpla Battle. As such, it is equipped with a small torch, instant glue and quick-drying putty. As stated by Yuuma, each Karel is manually controlled by Gundam Portent's pilot, signifying Shia's excellent control skill. Thanks to the five Karels, the Gunpla can recover from critical damages and continue battling without any problems. Interestingly, one of the five Karels contains a Haro.

For the history of the G-Portent, please see Shia Kijima's page. 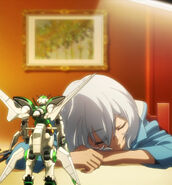 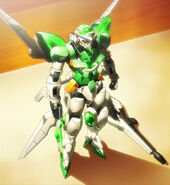 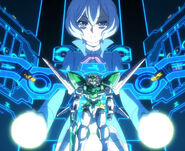 G-Portent using its Particle Transformation Field as a barrier

The ending of the G-Portent and Star Winning Gundam 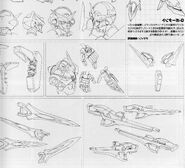 Lineart & Profile
Add a photo to this gallery

Retrieved from "https://gundam.fandom.com/wiki/GNW-100P_Gundam_Portent?oldid=428868"
Community content is available under CC-BY-SA unless otherwise noted.