The Gundam Throne Drei is the third unit in the Gundam Throne series operated by Celestial Being's second team, Team Trinity.[1][2][3][4] Specializing in supporting the other two Gundam Thrones, Eins and Zwei, the Drei has enhanced search capabilities and unique features like the GN Stealth Field that disrupts radar and communications over a wide area, and a GN Shield Pod for storing equipment for itself and its teammates.[3][4][5][6] Such a support type is not present among the Gundams of the Ptolemaios team, highlighting the different operating method of the three Gundam Thrones that are designed on the premise of fighting together as a team.[2][3][5][7] Due to its role, Drei has minimal offensive power in the form of a GN Handgun and two GN Beam Sabers; it also has a GN Shield for defense.[6][7][8][9] All three Gundam Thrones are developed based on the 0 Gundam, with their systems and armor utilizing the same technology as the Ptolemaios team's Gundams, but they have a different type of GN Drive– the "GN Drive Tau" that emits red GN Particles.[3][10][11][12]

The Gundam Thrones are customized version of the same basic machine, thus they have the same body frame and basic parts, with variations in weaponry, equipment and head design setting them apart.[3][6][13][14] The Drei's head is larger than that of the Eins and Zwei, and is equipped with enhanced sensor system as well as improved information processing capabilities.[6][13][15][16] As the amount of data collected is too much for Drei's pilot, Nena Trinity, to process by herself, she is aided by a purple Haro robot that also assists in operating the Gundam during combat.[6][8][17] The Haro is mounted on a dock in the center of the cockpit, resulting in the Drei having a slightly different cockpit layout from Eins and Zwei.[1][6][8][18] This is the same Haro that the Corner Family recovered from a wrecked Celestial Being spaceship near Jupiter about 80 years ago, and data of the original GN Drive stored within this robot played a critical role in the development of the GN Drive Tau.[19][20][21][22]

While the Drei's wide-ranging GN Stealth Field is a powerful stealth/jamming ability, its deployment requires the release of a huge amount of GN Particles, leading to the usages of other equipment to be kept to a minimum to ensure there are sufficient particles.[1][5][6][7] Furthermore, to cope with the widely dispersed particles of the GN Stealth Field, the Drei's GN Particle control range is also much larger than other Gundams'.[1][5] As with the Ptolemaios team's Gundams, the Gundam Thrones have devices such as a pair of special antennas for controlling GN Particles, but the antennas are located on top of the shoulder armor (next to the GN Beam Sabers' storage racks) instead of being torso-mounted.[5][6][14] The Gundam Thrones do not have cables for transporting GN Particles to each part of the body like the Ptolemaios team's Gundams, instead the particles flow within the frame structure of their bodies.[6][9][23][24] Thus, when the coating on the frame's surface is stripped away, a luminescence effect due to the particles within can be observed.[24] The same system is also adopted in the cockpit's frame.[24]

Alejandro Corner, United Nations ambassador, one of Celestial Being observers and a member of the aforementioned Corner Family, masterminded the creation of Team Trinity and Gundam Thrones without informing Celestial Being, with the machines secretly built by Laguna Harvey in the factories within the Orbital Elevators based on his instructions.[14][18][20][28] However, Alejandro's intention was not to help the organization, but to further his and his family's ambition of world domination.[20][25][26][29] The Gundam Thrones have the same body frame and basic parts for ease of production and as a test for future mass production.[6][14] Multiple parts of the Gundam Thrones are utilized in building the Throne Varanus, which is the prototype of the GN-X, a mass production mobile suit later provided by Alejandro to the three major powers opposing Celestial Being.[11][20][21][30] The Gundam Thrones are therefore regarded as the basis for the GN-X.[2][5][21][31]

Following the lost of Eins and Zwei, and death of her brothers, Drei and Nena are taken in by Wang Liu Mei, an agent of Celestial Being.[4][29][32][33] Four years later in AD 2312, Nena continues piloting the Drei while in service of Wang.[4][33][34] Although Drei is now considered an old model unable to fight on an even level with the current GN Drive Tau-powered mobile suits, its specialized functions still have high potential.[33] Thus, it no longer actively participates in combat and is instead utilized for intelligence gathering and espionage activities.[4][33] This is usually done with the Drei hidden in the mobile armor, Liang.[32][33][34][35] When needed, Drei can add the Liang's GN Long Rifle to its armament.[4][14][18][33] During this time, Nena also contacted a member of the Innovators, Regene Regetta, to seek a more powerful mobile suit to avenge her brothers' death.[35] This resulted in the Arche Gundam Drei, which combines the Drei's combat support capabilities with the design of the Arche Gundam.[15][16][35][36]

Mounted on the Drei's right forearm, this beam firearm is also equipped by Zwei.[5][6][8][14] However, due to a reduction in GN Particle consumption, the firepower of Drei's GN Handgun is inferior to Zwei's, but it is still capable of destroying enemy mobile suit, mobile armor, and mobile suit space carrier.[1][5][26][34] The GN Handgun is also used for docking with and transference of GN Particles to Eins, increasing the firepower of the latter's GN Launcher.[5][6][19][37] To do so, the lower part of the GN Handgun slides down and a hidden section with extendable cable is deployed to plug into one of two concealed ports in Eins' backpack.[18][19][37][38]

Melee weapon that emits a beam blade made of GN Particles when used.[5][6][26][39] A pair of GN Beam Sabers are stored on top of Drei's shoulders and they utilized the same technology as those of the Ptolemaios team's Gundams'.[5][6][8][14] However, this model, which is also equipped by Eins and Zwei, has higher destructive power due to its larger size.[5][6][18][39] The weapon's GN Particles are supplied from Drei, but as it has a small GN Condenser within, its beam blade does not dissipate immediately when it leaves the Gundam's hands.[5][10][39]

A small shield attached to the right shoulder that also serves as a weapons rack.[3][4][5][7] It has seven slots for storing missiles, spare beam sabers, and other equipment to meet operational needs.[3][5][18][26] The stored equipment can used by any of the three Gundam Thrones.[3][5]

Attached to the left shoulder, this shield has limited sensor functions.[5][8][14][18] During defense, its surface is coated with GN Particles to enhance defensive power.[5][8] However, direct battle is avoided as much as possible due to Drei's characteristics.[8] Furthermore, as Drei consumes a large amount of GN Particles when deploying the GN Stealth Field, usage of this shield and other equipment have to be minimized.[5] Two large panels on the surface of the GN Shield can open to release GN Particles when the GN Stealth Field is deployed.[1][4][18][34]

A beam cannon belonging to the mobile armor Liang, it can be removed and then attached to the Drei's GN Handgun for use by the Gundam.[4][14][18][33] With the GN Long Rifle, Drei's offensive power is enhanced.[33][40]

Also known simply as "Stealth Field", the GN Shield and various parts of Drei's backpack units open to release and disperse a massive amount of GN Particles, resulting in the disruption/jamming of radar and communications over several hundreds kilometers.[1][4][5][22] One of the GN Particles' ability is to cause electromagnetic interference when released into the air/space, rendering radar and communication devices useless, and all the Gundams utilize this as a basic stealth function.[5][6][22][41] The Stealth Field is an enhanced version of this function, with the amount of GN Particles released being several tens of times more.[5][6] The Drei's particle control range is also enhanced by a similar magnitude, compared to other Gundams', to better control the widely dispersed GN Particles.[1][5] Due to the huge amount of GN Particles needed for the GN Stealth Field, usages of other equipment are kept to a minimum to ensure there are sufficient particles.[5] Besides being used for Stealth Field, Drei can release GN Particles from its backpack units, also known as "GN Particle Generators" or "GN Particle Release Units", to defend itself against enemy ranged attacks from the back.[6][8][13][26]

Small versatile robots with individual AIs that are deployed by Celestial Being for support and maintenance work.[42][43][44] A purple Haro serves as Nena's partner and can be placed on a circular dock in the center of the Drei's cockpit.[1][6][8][32] Nena's Haro assists her in processing the huge amount of data collected by Drei's sensors, and like the Haro that serves as Lockon Stratos’s partner, it can also aid in operating the Gundam.[6][8][17] 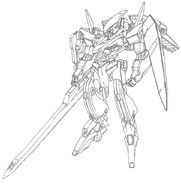 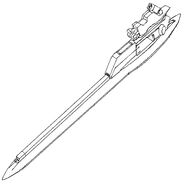 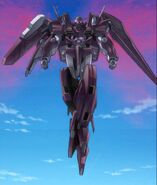 About to be destroyed by Regnant (Season 2)