The GNW-003/SH Liang (aka Liang) is a mobile armor introduced in season 2 of the Mobile Suit Gundam 00 anime and is piloted by Nena Trinity.

The Liang is a small transport craft-like mobile armor used by Nena Trinity, who became a subordinate of Celestial Being agent Wang Liu Mei following the collapse of Team Trinity.[1][2][3][4] Created by the Wang Trading Company, it stored Nena's GNW-003 Gundam Throne Drei within its body, concealing and acting as a disguise for the mobile suit.[1][4][5][6] The Liang was primarily used for intelligence gathering activities, such as reconnaissance, due to its excellent stealth capabilities.[1][2][3][4] Additionally, the mobile armor could take advantage of the Throne Drei's search capabilities in its mission.[5]

Capable of flight both on Earth and in space, the Liang also functioned as a transport craft as it has space in its front section for carrying cargo.[5][7][8][9] These cargo were loaded and unloaded through two bottom hatches at the front of the mobile armor.[4][8][10] The Liang is equipped with its own GN Drive Tau that produces red GN Particles, and a GN Long Rifle mounted at the bottom enabled it to engage in combat to a certain extent.[1][4][5][11] The Liang can be piloted from the stored Throne Drei, and when needed, parts of the top, rear and side sections of the mobile armor can open to release the Gundam.[6][5][10][12]

Nena Trinity was sent out in the Liang to scout an Earth Sphere Federation Forces' dissident detention center on Earth as Celestial Being agent Wang Liu Mei had received information that Allelujah Haptism, a Gundam Meister who went missing four years ago, is alive, but captured and held there. After confirming the information is accurate, Nena also informed Wang that A-Laws forces have appeared on the scene. She was then recalled by Wang and flew off in the Liang.

A Middle Eastern base of the anti-government organization Katharon survived an A-Laws' assault thanks to intervention from Celestial Being. Nena's Liang was then deployed to deliver aid to the base as part of Celestial Being's effort to assist the survivors. After the Liang landed in the base, food and supplies needed for evacuating the survivors were unloaded through two bottom hatches at the front of the mobile armor.

In space, the satellite weapon, Memento Mori, was destroyed by the Celestial Being, but the GN-0000+GNR-010 00 Raiser had difficulty withdrawing from the combat zone due to attacks from a persistent GNZ-003 Gadessa. Out of nowhere, Nena's Liang intervened and fired multiple beam shots at the Gadessa. This not only halted the Gadessa's attacks, but also distracted its pilot, allowing the 00 Raiser to close in and slice off the enemy mobile suit's right arm before escaping.

After escaping from the Gadessa, the 00 Raiser arrived at the rendezvous point with the CBS-74 Ptolemaios 2, but the carrier spaceship was not there. The 00 Raiser's pilot, Setsuna F. Seiei, then spotted debris from the ship and was approached by the Liang after entering the debris field. Nena opened a communication channel with the 00 Raiser and greeted Setsuna.

Setsuna recognizes Nena, but perceived her to be a threat and aimed the 00 Raiser's pair of GN Sword IIs at the Liang. In respond, Nena revealed she was the one who helped him in the battle with the Gadessa and informed him that the Ptolemaios 2 had fell to Earth. She also sent him data to help with locating the carrier spaceship, but before she could say more, Setsuna had already rushed off to find his teammates.

On board the Trinity Mothership, Wang Liu Mei wanted to inform the crew of Ptolemaios 2 about Veda's location so as to disrupt the Innovators's plan. Her assistant and elder brother, Hong Long, then discovered the spaceship's systems had been sabotaged. While the pair were at a lost about what to do, they were contacted by Nena in the approaching Liang.

Nena, who seemed to have sided with the Innovators, revealed that she was the saboteur. She then disclosed her hatred for Wang, and released the GNW-003 Gundam Throne Drei from the Liang's body. Using the Gundam, she shot at the Trinity Mothership multiple times, destroying the spaceship in an attempt to kill Wang. The Liang's fate after this is unknown. 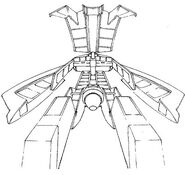 Trucks carrying supplies out of Liang