An assault type mobile suit specializing in close and medium-range combat, the Gundam Throne Zwei is the second of three Gundam Thrones operated by Celestial Being's second team, Team Trinity.[1][2][3][4] Functioning as the team's vanguard during battles, Zwei's primary weapons are a huge GN Buster Sword for melee attacks and a set of wireless, remote-controlled units called GN Fangs that can engage multiple enemies simultaneously.[2][3][5][6] Its other weapons are a GN Handgun and GN Beam Sabers, and its head has a highly versatile design but lacks special features like those of the other two Gundam Thrones, Eins and Drei.[1][2][5][6] Developed from the 0 Gundam, the Gundam Thrones are customized version of the same basic machine.[2][6][7][8] They have the same body frame and basic parts, with variations in weaponry, equipment and head design setting them apart.[6][9][10] Their systems and armor utilized the same technology as the Gundams of the Ptolemaios team, but they have a different type of GN Drive– the "GN Drive Tau" that emits red GN Particles.[2][5][6][11]

The red GN Particles are generally safe but they have a toxic effect when utilized as beams, causing cellular defects that prevent the application of regeneration treatment to injury site, and this is due to the particles' compression rate.[6][13][18][19] As with the Ptolemaios team's Gundams, the Gundam Thrones have a pair of special antennas for controlling GN Particles, but they are located on top of the shoulder armor (next to the GN Beam Sabers' storage racks) instead of being torso-mounted.[5][6][10] Unlike the Ptolemaios team's Gundams, the Gundam Thrones do not have cables for transporting GN Particles to each part of the body, instead the particles flow within the body's frame structure.[1][5][6][12] Thus, when the coating on the frame's surface is stripped away, a luminescence effect due to the particles within can be observed.[5] The same system is also adopted in the cockpit's frame.[5] Among the Gundam Thrones, Eins and Zwei have the same cockpit layout while Drei's differs slightly.[6][10][20] Alejandro Corner, a United Nations ambassador and a Celestial Being observer, masterminded the creation of Team Trinity and Gundam Thrones without informing Celestial Being, with the machines secretly built by Laguna Harvey in the factories within the Orbital Elevators based on his instructions.[10][20][21][22]

However, Alejandro's intention was not to help the organization, but to further his and his family's ambition of world domination.[17][18][22][23] The Corner family also developed the GN Drive Tau, based on data of the original GN Drive stored in a purple Haro recovered from a wrecked Celestial Being spaceship near Jupiter.[13][16][22][24] The Gundam Thrones have the same body frame and basic parts for ease of production and as a test for future mass production.[6][10] Multiple parts of the Gundam Thrones are utilized in building the Throne Varanus, which is the prototype of the GN-X, a mass production mobile suit later provided by Alejandro to the three major powers opposing Celestial Being.[7][13][22][25] The Gundam Thrones are therefore regarded as the basis for the GN-X.[13][15][26][27] The Zwei's operating data and weapon technology are later utilized by the UN Forces to develop a close combat variant of the GN-XII, the GN-XII Sword.[7][8][28] Lastly, the combination of the Zwei's design data with the Innovators' technology lead to the creation of the Gundam Throne series' final combat form, the Arche Gundam.[20][29][30][31]

A huge sword that serves as the Zwei's primary melee weapon, it is mounted on the side of the right shoulder when not in use.[5][6][24][32] High density GN Particles are stored in the GN Buster Sword's center and they are released the moment the weapon is swung.[5][6][32][33] As a result, this physical sword also has the traits of a beam saber.[5][6][32][33] Furthermore, through the weight manipulation ability of the GN Particles, the GN Buster Sword can become heavier at the moment of impact, increasing its destructive power.[5][6] When needed, the sword can function as a shield to block enemy's ranged attacks.[23]

The GN Fangs are a set of small, wireless, remote weaponry controlled by Zwei's pilot that can engage multiple opponents simultaneously.[4][5][6][34] Due to their high-speed movements and multi-directional attacks, it is impossible for average mobile suit pilots to defend against the GN Fangs.[4][5][6][9] Primarily used for medium-range combat, each GN Fang has an emitter at the bottom for firing beam shots or to generate a beam blade.[5][18][24][34] Additionally, the GN Fangs can penetrate enemy units as well as the Gundam Virtue's GN Field without the use of the beam blade.[4][35] Zwei has a total of eight GN Fangs, four stored in each hip-mounted GN Fang Containers.[5][9][20][36] Typically, only six are used, with all eight deployed during emergencies such as fighting other Gundams.[1][4][5][36] The GN Fangs can deploy a pair of side-mounted wings for higher maneuverability when needed and due to their limited GN Particle storage, they have to periodically return to the containers for recharge.[4][6][24][34]

A beam firearm equipped by Zwei and Drei, its firepower is inferior to the beam rifles of other Gundams, but still sufficient for damaging enemy machines.[5][6][18][35] The GN Handgun is mounted on the Zwei's left forearm so as not to interfere with the use of the GN Buster Sword.[5][9][32] It is also used for docking with and transference of GN Particles to Eins, increasing the firepower of the latter's GN Launcher.[5][24][37] To do so, the lower part of the GN Handgun slides down and a hidden section with extendable cable is deployed to plug into one of two concealed ports in Eins' backpack.[5][20][24][36]

Melee weapon that emits a beam blade made of GN Particles when used.[5][6][23][32] A pair of GN Beam Sabers are stored on top of Zwei's shoulders and they utilized the same technology as those of the Ptolemaios team's Gundams.[5][6][10][32] However, this model, which is also equipped by Eins and Drei, has higher destructive power due to its larger size.[5][6][20][32] The weapon's GN Particles are supplied from Zwei, but as it has a small GN Condenser within, its beam blade does not dissipate immediately when it leaves the Gundam's hands.[5][11][32]

A system that allows a mobile suit pilot to control the machine's remote weaponry.

For the history of the Gundam Throne Zwei, go to Michael Trinity and Ali al-Saachez's pages. 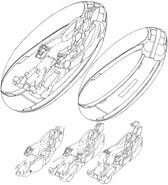 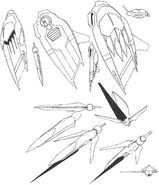 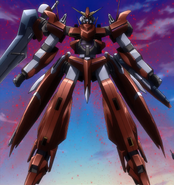 Close up of a GN Fang

In space (close up)

With The-O (center), and Gundam Virsago (right) as seen in episode 10 of the Gundam Build Fighters TV series.