The most prominent feature of the Turbulenz unit is that it has its own GN Drive Tau located on the lower back; this meant that the Throne Eins Turbulenz has two GN Drive Taus, with another in the Throne Eins itself.[1][2][3] The Turbulenz unit’s GN Drive Tau not only extend the mobile suit’s operating time, it also ensures there is adequate GN Particles for battling even after a large amount have been consumed for long-distance, high-speed travel.[1][2][3] Furthermore, this GN Drive Tau makes it possible for the Turbulenz unit to detach from the mobile suit and operate as an unmanned support machine after reaching the operation area.[1][2][3] It is thought that the Turbulenz unit have long-distance traveling ability and support machine function to allow the three Gundam Thrones to operate independently and far apart from each other, as opposed to their typical team-based operating method.[2][3]

The original plan was to build three different versions of the Turbulenz unit, each with some changes to adapt to a particular Gundam Throne’s characteristics.[2][3] However, only the Throne Eins’ version was built in the end and even then, usage of the equipment was dropped after testing.[2][3] The reason for this is that the Turbulenz unit is too powerful and its long-distance, high-speed traveling ability is inconvenient for a certain person.[2][3] This person had initiated the Turbulenz unit’s development with the intention of it being used by the Gundam Thrones, but the rapid pace of events was unkind to the Team Trinity.[2][3]

The main weapon of the Throne Eins Turbulenz, the GN Blaster replaces the regular Throne Eins’ GN Launcher.[2][3] Held in the right hand in both MS Form and Flight Form, its firepower is on par with the GN Launcher’s, but it cannot be utilized as the GN High-Mega Launcher.[2][3]

The same handheld melee weapon as used by the regular Throne Eins, it emits a beam blade made of GN Particles when drawn.[2][3][4] This model is larger and more destructive than the ones used by the Ptolemaios team’s Gundams.[4][5] It also has a small GN Condenser within, and because of this, its beam blade does not dissipate immediately after leaving the Gundam’s hands.[4][5] Two GN Beam Sabers are stored in each of the Throne Eins Turbulenz’s shoulder armor, for a total of four sabers.[2][3]

The Gundam Throne Eins Turbulenz underwent several live combat testing, but was not formally deployed for combat.[2][3] It was implied that this was because the Turbulenz unit had become unnecessary by that point of time.[2][3] The Throne Eins Turbulenz’s test records were later viewed by Robert Spacey and the UN-affiliated Deborah Galiena at a facility linked to the Gundam Thrones.[2][3] A chill went down Robert’s spine at the thought of the horrors the Gundam Thrones would have caused with such an equipment, while Deborah had an uneasy look on her face.[2][3] However, the UN ambassador accompanying them, Alejandro Corner, had a broad smile and this left a deep impression on Robert.[2][3] 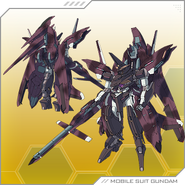 Retrieved from "https://gundam.fandom.com/wiki/GNW-001/hs-T01_Gundam_Throne_Eins_Turbulenz?oldid=497764"
Community content is available under CC-BY-SA unless otherwise noted.