These are three dagger like weapons mounted on the GN Sword IV.[2] Similar to most weapons of the GN Sword series, they possess both a Gun Mode and a Blade Mode.[2] Two of these can combine together to form the "GN Gunblade Twin Edge".[2] The GN Gunblades can be combined with the GN Sword IV in a number of different forms and can be used as the handles in some of these forms.[2]

Developed before GN Sword V as indicated by its name, it is a GN Sword with a similar appearance to the GN Buster Sword II but with the green blade used in GN Sword III. The sword consists of two parts: the top part contains the sword blade and is about 2/3 of the total sword's length, while the bottom part is the sword base and contains the sword handle. The handle is retracted while the sword is stored, with one Gunblade attached to the flat side of the sword while the other two are attachedalong the edges. In addition to the regular "Saber" and "Full Saber Modes" (with 0-2 GN Gunblades/with all GN Gunblades mounted receptively), it also possess four other modes: "GN Katar Mode", "Rifle Mode (High Output & Rapid Fire)", "Rifle Mode (Wide Cutter Particle Beam)", and "GN Launcher Mode".[2]

The 00 Qan[T]'s primary weapon. It is fully made from the green material used to make GN Condensers. The beam output of it's rifle mode is variable. It possesses two modes: Sword Mode and Rifle Mode. In conjunction to an ordinary rifle mode, it can also combine with the GN Sword Bits to either form a buster rifle or a buster sword depending on the formation.[​1]​​[​11]​​ With all six GN Sword Bits attached to the sword in its buster rifle mode, 00 Qan[T] possesses the ability to create a large beam saber similar to the Raiser Sword while in Trans-Am.[​3]​​ When not in use, it is then stored on Qan[T]'s left waist.[​7]​​ Before entering the portal to the ELS' home world, Setsuna willingly threw the weapon aside.[​3]​​

Stored on the GN Shield are six GN Sword Bits,[​12]​​ of which there are 3 different types: A, B and C.[​7]​​ A Bits are the longest, B Bits are medium in length and C Bits are the shortest. All the Bits are usable as remote controlled weaponry, or as hand-held swords as they contain hidden handles.[​7]​​ They also possess many attacking roles in Qan[T]'s arsenal such as attacking individually or forming up as a whole set with the GN Sword V to become either a buster rifle or a buster sword.[​1]​​

In addition to offense, the bits can also create a GN Field when positioned together in a circle[​1]​​ and their defensive capabilities are higher than Gadelaza's GN Large Fangs and Zabanya's GN Holster Bits.[​13]​​ The Bits also aid the Quantum System when the system is activated, and in quantum teleportation by grouping into a circular, portal-like formation, using a thick saturation of GN Particles as a gateway.[​3]​​ Overall, the Sword Bits are very versatile and their stats are higher than any other remote weapons.

A shield binder on the left side of 00 Qan[T] that is connected to its backpack via the same mechanism as 00 Gundam's "Drive Arm". Other than possessing 00 Qan[T]'s other GN Drive underneath, it also acts as the storage and quick-recharge unit for the GN Sword Bits when they are not actively used. There is also a beam gun with variable output mounted on top of the shield for missile interception purposes.[​1]​​ The shield possesses a panel that reveals the GN Drive unit when opened, large amounts of GN Particles can be released from this point.[​3]​​ Because GN Particle emissions are known to have defensive properties, it is theoretically possible for the shield to use these emissions as defensive measure similar to 00 Gundam, although it is never seen as itself is already a very robust solid shield, capable of blocking shots from ELS Baikal and Volga-Class battle cruisers, if not more powerful shots during the ELS conflict.

The shield can also swing to the rear of 00 Qan[T] and make the two GN Drives physically connect with each other.[​1]​​ It is in this configuration that the Quantum System is used in order to amplify the power of the machine's Quantum field of communications.[​3]​​ When the Sword Bits are deployed, they are expanded toward both sides of the GN Shield, and simultaneously fly towards the locked-on target.[​7]​​

If the Qan[T] Full Saber had been used, Veda's simulation showed that it have the potential to repel the invasion of Extraterrestrial Living-metal Shape-shifter by itself.[1] However, since this simulation is based on incomplete data about the ELS (missing crucial information such as self-regeneration and ability to learn and adapt in battle), it's unknown how effective the Qan[T] Full Saber would have been in actual combat against the ELS.[1] 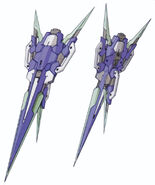 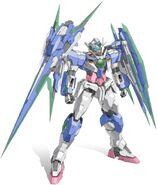 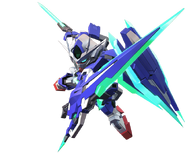