The GNR-101A GN Archer (aka GN Archer, pronounced "Gun Archer") is a transformable support unit for GN-007 Arios Gundam and is piloted by Marie Parfacy.

GN Archer is a transformable MS created to support GN-007 Arios Gundam, and when both suits are in fighter mode, they can combine to form Archer Arios. Manufactured in the L3 resource satellite, it is developed based on GN-003 Gundam Kyrios's GN Tail Booster and is actually a rebuilt GNY-0042-874 Gundam Artemie. As it is a re-purposed Gundam, GN Archer still has a Gundam face behind its visor.

GN Archer is powered by a huge GN Condenser when operating independently, and can feed off GN particles from Arios' GN Drive when combined. In fighter mode, GN Archer is capable of high speed combat and can use its GN missiles as well as a pair of GN vulcans to engage enemy units. In MS mode, GN Archer retains the use of the GN missile and gains the ability to attack enemy units with two wide-muzzle GN beam rifles or with its GN beam sabers. GN Archer serve as a Tail Booster unit after combining with Arios, enhancing its speed and offensive capability.

The GN Archer must periodically dock with Arios in fighter mode to recharge its GN Condenser(s). This is considered to be GN Archer's main weakness as it forces Arios to transform to recharge the unit or it would eventually power down. Under certain situations, this can become a liability as GN Archer hinders Arios in combat.[2] Overall, GN Archer's combat capabilities are lower than the Gundams, but rivals any GN-X III and/or Aheads in the battlefield; however the lack of a GN Drive limits its operation in combat.

GN Archer is equipped with two GN Beam Rifles. The muzzle of these rifles are wider compared to those used by Gundams and can thus fire larger beams. Instead of attacking the enemy, the main purpose of the rifles is to protect allied units (like shooting to create a gap between the enemy and allied unit). Usable only in MS mode. When using a GN beam saber, one is stored on the waist.

A pair of GN vulcans are mounted near the nose of the fighter mode. They have low power but high firing rate and as such, they are often used to shoot down missiles or to limit the enemy's movement.

Same type of close combat weaponry as used by other Gundams. The GN Archer has two of them, which are usable only in MS mode.

GN Archer is equipped with 16 missiles launch tubes in the side binders and they are coverd by 8 hatches. The GN missiles stored within have homing capability and when they hit their targets, they inject GN particles to destroy the enemy from within.

After the break pillar incident, Marie's Soma personality took over and participated in all of Celestial Being's operations with GN Archer. She confronted Andrei Smirnov once, fighting equally with the GN Archer, only to be stopped by Allelujah Haptism and Saji Crossroad from chasing Andrei.

In the final battle against the Innovators, Allelujah/Arios and Soma/GN Archer were responsible for covering Ptolemy 2 which was docked at the Innovator's colony ship. Just when GN Archer ran low on GN particles and needed to dock with Arios, it was severely damaged by two incoming GNZ-004 Gagas. Soma was unharmed, leaving only Allelujah/Arios to protect the disabled GN Archer and Ptolemy 2. The fate of GN Archer after the battle is unknown. 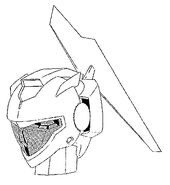 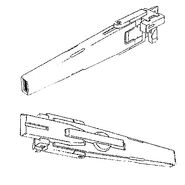 Retrieved from "https://gundam.fandom.com/wiki/GNR-101A_GN_Archer?oldid=455479"
Community content is available under CC-BY-SA unless otherwise noted.