The GNR-010/XN XN Raiser (aka XN Raiser, pronounced Sun Raiser), is a conceptual modification of the original GNR-010 0 Raiser which is featured in the Mobile Suit Gundam 00V side story. The unit is piloted by a civilian, Saji Crossroad.

The XN Raiser is a configuration of the GNR-010 0 Raiser equipped with the GN021XN XN Unit. XN Raiser still carries the same armaments as the original 0 Raiser, but adds on two GN Buster Sword III which serve as ramming weapons, increasing the unit's combat capability. The unit also has an additional pair of manipulator arms to hold extra weapons. When combined with the 00 Gundam, the entire craft docks onto the Gundam's back with the sword handles exposed for 00 to quickly use.

The intention of the XN Raiser was to give the 0 Raiser the ability to rival the 00 Gundam in combat. However, since the 0 Raiser is docked with the 00 Gundam most of the time, this design was never produced, and the unit exists only as simulation data. This data would contribute to the development of future units.

Upon hitting the target, it will inject GN Particles, destroying it from the inside. Suitable against huge targets like warships, 0 Raiser's missiles are smaller compared to those used by Gundams, so more can be stored in the 0 Raiser. Because of improvements in compression technology, the power loss as a result of smaller size is nil. The weapon is target seeking, so it's a very important armament for Saji, who is not suitable to battle. Usable when docked.

Beam weapon using GN Particles, 0 Raiser's main armament. Its firing rate is higher than a beam rifle, but weaker. It is the same type of weapon as the GN Beam Submachine Gun and the GN Submachine Gun used by Kyrios and Arios respectively. However, as this weapon uses up a lot of GN Particles, for 0 Raiser which is not equipped with a GN Drive, there's a limit of use. However, since Saji is not very active in the battlefield, the energy consumption is not a problem. Usable when docked.

Same weapon as used by Exia. Used to shoot down missiles, range is long but power is weak. When used against a solar furnace equipped suit, it's mainly for distraction. The actual use for this weapon is to distract enemies when combining with 00 Gundam. After combined with 00, the attack direction is fixed to downward.

Two GN Buster Sword III are equipped for improved combat capabilities, serving as ramming weapons. When combined with the 00 Gundam, the entire craft docks onto the Gundam's back with the sword handles exposed for 00 to quickly use.

Equipped in front of 0 Raiser, it includes multiple sensors, which are more powerful than those equipped in MS. Used for data gathering in battle, and send the information to other MS. To fully utilize this system, a pilot and a Haro is needed.

Raiser System is a system feature unique to GN-0000+GNR-010 00 Raiser in Mobile Suit Gundam 00. The system itself is designed to help stabilize the Twin Drive System and store additional GN particles for 00 Gundam.

Believing that he should be able to defend himself, Saji Crossroad goes into a battle simulator in the GNR-010 0 Raiser's cockpit, but is repeatedly shot down. Remarking that a Gundam would be stronger, the Red Haro overhears this and switches the simulation data to that of the XN Raiser. This allowed Saji to destroy all the enemies in the simulation, who was surprised by the XN-Raiser's fighting strength. However, Saji disapproved of the violent simulation and resolved to fight his own battles, without the XN-Raiser. 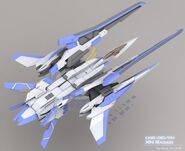