The GNR-001E GN Arms Type-E and GNR-001D GN Arms Type-D (aka GN Arms) are enhancement and support machines created for the GN-001 Gundam Exia and the GN-002 Gundam Dynames respectively. The GN Arms Type-E is piloted by Lasse Aeon.

Superior as the Celestial Being's Gundams are compared to other mobile suits in AD 2307, only four such machines are deployed for the organization's armed interventions.[1] This is expected to be insufficient as the conflict with the three major powers of the world (Union, HRL and AEU), which had much superior numbers, intensifies.[1] With producing more Gundams being difficult due to the special conditions needed to produce their core unit, the GN Drive, the Celestial Being's development team proposed the development of the GN Arms - an enhancement and support machine for the Gundams.[1][2][3][4] The GN Arms is developed from the data of the GNR-000 GN Sefer and the GN-001/hs-A01D Gundam Avalanche Exia'.[4][5][6][7]

Powered by a GN Condenser, the GN Arms can operate independently for a limited period of time.[1][8][9][10] For sustained combat, the GN Arms has to transform and dock with a Gundam to form the GN Armor as it lacks the semi-perpetual GN Drive.[3][4] The GN Arms has excellent mobility, multiple beam weaponry and is capable of high-speed combat.[1][8] Even though just a support machine, the overall capabilities of the GN Arms are comparable to those of a mobile suit.[1] However, the performance of the GN Arms is dependent on the stored GN Particles in the GN Condenser, which are used for power, propulsion and to form the beams of beam weaponry, and its performance will be greatly reduced if the particles are depleted.[1] Thus, the GN Arms' pilot must pay attention to the GN Particles reserve while battling.[1][9] The pilot is seated in a single-seater cockpit, similar in looks to a mobile suit's cockpit, located in the center block of the GN Arms.[1][8][11]

Two GN Arms units were produced: the GN Arms Type-E for the GN-001 Gundam Exia and the GN Arms Type-D for the GN-002 Gundam Dynames, and after docking with their Gundam partner, they form the GN-001+GNR-001E GN Armor Type-E and GN-002+GNR-001D GN Armor Type-D respectively.[1][3][4] The GN Arms do not compensate for any of their Gundam partner's weakness, but rather improve on their specialties.[8] Accordingly, the GN Arms Type-E has Large-Size GN Swords and GN Beam Guns to complement the close combat specialized Exia, while the GN Arms Type-D has the GN Twin Rifle and Large-Size Missile Container for anti-fleet combat, augmenting the capabilities of the long-range shooting specialized Dynames.[1][3][4][8] Both GN Arms also share the same Large-Size GN Cannons and Claws.[1][3][4][8] In the GN Armor form, the GN Arms is powered by the Gundam's GN Drive, gaining infinite operating time and can perform at its fullest, with its offensive capabilities and mobility being usable at their maximum potential and the generation of a GN Field for defense becoming possible.[1][4][11] Sortieing directly in the GN Armor form is doable as seen with the GN Armor Type-D, eliminating the need for a pilot in the GN Arms Type-D.[3][8][12] The GN Arms' data is later used to develop the GNR-010 0 Raiser.[5][6]

A pair of close combat-use claws are mounted on the tip of the folded, leg-like parts at the bottom of the GN Arms Type-E and Type-D.[1][4][8] Each claw has three prongs that unfold during use.[1][4][8]

Also known as 'Large GN Cannon', the GN Arms Type-E and Type-D have two of this weapon and their emitters are located below the top sections of both machines.[2][4][8] They serve as the GN Arms' main armament, and their firepower are comparable to the GN-005 Gundam Virtue's GN Bazooka.[4] However, due to their high GN Particle consumption, they only perform at full power when in GN Armor form.[4] Despite this, they can still overwhelm the GNX-603T GN-X's GN Shield when fired by the GN Arms.[9] They also serve as the Ptolemaios' main guns when the Assault Container containing the GN Arms is attached to the ship.[4]

Also known as 'Large GN Sword', a pair are equipped on the movable arm-like parts on the sides of the GN Arms Type-E.[1][2][4][8] They are prepared for the close combat specialized Gundam Exia, and like the Exia's GN Sword, the physical blades of the Large-Size GN Swords are enveloped in GN Particles and can penetrate GN Field.[1][4][8][10] The GN Arms Type-E by itself cannot use the weapon effectively, however by taking advantage of its accelerating capabilities, it can still use the swords to destroy enemy unit.[1]

Mounted on the inner surface of each Large-Size GN Swords, the two GN Beam Guns are for restricting enemy movements and the likes.[1][4][8] Therefore, their firepower are not very high and inferior to that of the Large-Size GN Cannons.[1][4] However, they have a higher rate of fire and can target enemy units in a wider range due to being mounted on freely movable parts.[1][4][10]

Mounted on the GN Arms Type-D's right side, its twin barrels are folded when the machine is cruising and unfold during use.[4][12] The GN Twin Rifle's firepower is weaker than the Large-Size GN Cannons, but has high accuracy against targets at long range.[4]

A container carrying hundreds of GN Missiles equipped on the GN Arms Type-D's left side, it is also known as 'Ultra Large GN Missile Pod'.[3][4][8][12] The missiles, fully charged with GN Particles before hand, have high destructive power.[4] Exceptional combat results can be achieved when the missiles are fired en masse after the unit breaks into the enemy fleet.[4]

To neutralize the threat of Celestial Being, the three major powers of the world, the Union, HRL and AEU, established an alliance under the United Nation's control, creating the UN Forces. In respond to this, Sumeragi Lee Noriega recalled the Gundam Meisters and their Gundams to the Ptolemaios and asked Ian Vashti to bring Lasse Aeon along to retrieve the GN Arms.

The Assault Container with GN Arms Type-E was later loaded with the Gundam Exia as the Gundam Meister, Setsuna F. Seiei, wanted to go to Earth to stop UN Forces' attack on Team Trinity and to figure out the purpose for the Gundams' existence. Lasse volunteered to go along, noting the Assault Container's ability to exit the atmosphere; he also wanted to use the trip to conduct a performance test of the GN Arms Type-E. On Earth, they battled Ali al-Saachez who had taken control of the GNW-002 Gundam Throne Zwei, saving Nena Trinity. Meanwhile, the Ptolemaios traveled to a dock hidden in an asteroid in Lagrange 1 for repairs and resupplies, and was attached with the Assault Container loaded with the GN Arms Type-D.

As Lasse and Setsuna made their way back to the Ptolemaios, the UN Forces discovered the mothership and launched another attack. During the battle, Lockon Stratos sortied in the GN Armor Type-D and attacked the ships of the enemy fleet, destroying two of three ships. However, the GN Arms Type-D component of the GN Armor Type-D was then severely damaged by attacks from Ali's Throne Zwei and the last ship, forcing Lockon to eject the Dynames and continue the fight. The Dynames was later incapacitated, and Lockon left the Gundam with the rifle-shaped controller in hand. He then found one of the wrecked GN Arms Type-D's Large-Size GN Cannons, connected the rifle-shaped controller to it, and shot down the Throne Zwei with the cannon. As the Throne Zwei exploded, it fired a beam shot in retaliation, destroying the Large-Size GN Cannon and killing Lockon.

In the final battle with the UN Forces, the Assault Container loaded with Exia and GN Arms Type-E was launched from the Ptolemaios to take down the huge enemy mobile armor, the GNMA-XCVII Alvatore, while the GN-003 Gundam Kyrios and the GN-004 Gundam Nadleeh defended the mothership from the GN-Xs. When the Assault Container's GN Missiles and beam shots proved useless against the Alvatore's GN Field, Lasse rammed the container at the mobile armor and fired an almost point-blank beam shot, but this was also futile. The GN Arms Type-E and Exia then ejected from the Assault Container as it was ripped apart by the Alvatore.

The GN Arms Type-E and Exia shot repeatedly at the Alvatore, but failed to even scratch its armor. They eventually docked to form the powerful GN Armor Type-E and severely disabled the Alvatore. However, the GN Armor Type-E also suffered heavy damage in the process, and after piercing the Alvatore's GN Field with the right Large-Size GN Sword and lodging the weapon in the mobile armor, the GN Arms Type-E component exploded from the accumulated damages. The Exia ejected in time and destroyed the Alvatore with its GN Sword. Despite being seriously injured, Lasse survived the explosion and was rescued after the battle. 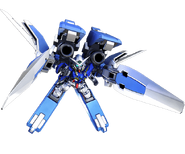 Retrieved from "https://gundam.fandom.com/wiki/GNR-001E/D_GN_Arms_Type-E/D?oldid=447795"
Community content is available under CC-BY-SA unless otherwise noted.