Two large cannons are built on top of the GN Arms and act as its main weapons.[2] Although they consume a lot of GN Particles, they are capable of generating beams that are as powerful as Gundam Virtue's GN Bazooka.[2] Their full power however is only usable when the GN Arms is combined with Exia.[2] When combined with the Ptolemaios as part of the Assault Container, they are also used as the main guns of the ship.[2]

Notably the most defining feature of the GN Arms Type-E, are it's two large GN Blades, one on each side of the unit for melee combat. Each large GN Sword has a GN Beam Gun stored behind the blade for ranged attacks. They are equipped with the same system as Exia's GN Sword,[2] and thus are able to pierce GN Fields.[3] Due to their increased size, their destructive power has greatly increased.[2]

A single GN Beam Gun is stored behind each of the Large-Size GN Swords. As they were primarily designed for suppression fire,[2] their attack power is not so high.[2] However since they are installed on arms that can move freely, they have a wider targeting range than the Large-Size GN Cannons.[2] 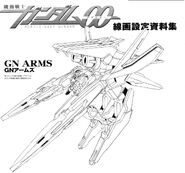 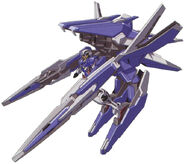 Retrieved from "https://gundam.fandom.com/wiki/GNR-001E/D_GN_Arms_Type-E/D?oldid=302065"
Community content is available under CC-BY-SA unless otherwise noted.