When the mobile armor section, the GNMA-XCVII Alvatore, can't be operated, the upper section of the armor will detach to reveal its mobile suit form. The top upper-section armor is actually the Alvaaron's wings and the two turrets are actually GN Beam Rifles that complements the mobile suit. The mobile suit itself is themed partially after the Gundams, but also after an angelic centurion. Alvaaron was built using mobile suit data that was exploited from the CB-001 1 Gundam.

The Alvaaron is a custom made mobile suit, having balanced qualities of artillery and close quarter combat mobile suits. It has two GN Beam Rifles for mid-range firing and two GN Beam Sabers for close combat. While its speed and strength is comparable to a third generation Gundam, the Alvaaron is not optimized for dealing with other high speed mobile suits.

The wings of the Alvaaron triples as a physical armor/shield, GN Field generator, and a collimator array of the particle beam cannon. Although a formidable mobile suit against the Gundams, the Alvaaron's wings are both its strength and weakness. If the wings are damaged in combat, both the GN Field and particle cannon capabilities are disabled. As with any GN Field, the Alvaaron's field can be compromised through physical GN Blades.

Like the Alvatore, the Alvaaron's GN Drive Tau emits golden yellow GN particles instead of the standard red particles as on the GNX-603T GN-X. This change is however only cosmetic.

The Alvaaron possesses two beam rifles that were originally a part of GNMA-XCVII Alvatore's overall weapon compliments. When separated as the Alvaaron, the pilot may choose to discard one of the rifles to leave an empty hand for the beam saber, and use the rifle for short to mid-range firing. The Alvaaron's rifles have moderate firepower like the rifle of the GNX-603T GN-X during normal combat. However, the rifle is also the source of the powerful particle beam cannon, in which the power of the rifle is charged and significantly amplified by the wings. The power of Alvaaron's particle beam cannon is devastating with just one beam rifle. However, the Alvaaron could charge both of its beam rifles for an even more powerful and devastating attack.

When the wings rotate forward, a charge builds between the inner surfaces of the two wings, which are now facing each other. The mechanism is similar to when Virtue, Seravee, and GNZ-003 Gadessa open the barrel of their respective bazookas/launchers. Although the wings are not the source of the beam, they are still critical to its formation, as evidenced by Alvaaron's inability to use the GN Particle Beam Cannon after the GN-001 Gundam Exia severed one of the wings.

The Alvaaron's wings can generate a GN Field that surrounds itself entirely without shifting its wings. The wings can also move in front of the mobile suit's body to concentrate the GN Field against an enemy attack that comes right on. Alvaaron's GN Field is shown to be able to manifest faster than the Virtue's because it does not require any mechanism to generate a GN Field.

The Alvaaron equipped with an on board combat AI that helps the pilot engage in battle.[1] This AI is responsible for long range shooting and simple combat maneuvers.[1] Combat AIs are usually meant for simple one on one fights or long range shooting with heavy firepower as the maneuvers required during these instances are simplistic.[1] As a result of this, the scope of its effective usage is the battlefield is fairly narrow and is generally not equipped on other mobile suits.[1] The Combat AI also had a support feature that is linked to Ribbons and Veda, but it did not function as intended due to Ribbons' betrayal.[1]

Although this ability has not been shown in the series, the Alvaaron possesses a golden anti-beam coating, giving it some protection against beam weaponry. Other details about the coating is unknown.

For more information on the Alvaaron's history, please go to Alejandro Corner's page. 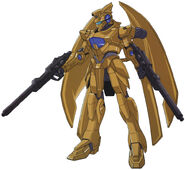 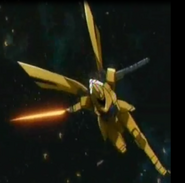 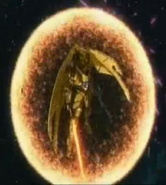 The Alvaaron battling the Gundam Exia 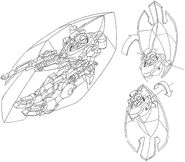 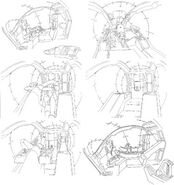 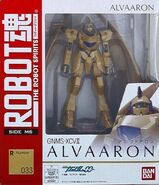 Retrieved from "https://gundam.fandom.com/wiki/GNMS-XCVII_Alvaaron?oldid=385194"
Community content is available under CC-BY-SA unless otherwise noted.