GNMA-Y0002V Gadelaza (aka Gadelaza), is a mobile armor designed and built by the ESF that appears in Mobile Suit Gundam 00 The Movie: A Wakening of the Trailblazer. The unit is piloted by Descartes Shaman.

Gadelaza is the largest transformable mobile armor (MA) in existence, and is presumably the successor of GNMA-0001V Regnant. Gadelaza is an extraordinarily large and powerful mobile weapon, with an overall length of more than 300 meters that makes it even longer and larger than the Baikal-class and CBS-70 Ptolemaios. It is an experimental unit considered to be the next mainstay MA for the ESF Army; potentially replacing the current GNX-803T GN-XIV series.[3][5]

Gadelaza is designed to be a "one man army", possessing enough firepower to match an entire fleet on its own. While Gadelaza's full capabilities have yet to be fully explored, the unit utilizes GN Fang-like weapons and a massive GN Beam Cannon for combat. The remote weapons are all powered by their own individual Tau Drives, each powerful enough to rival against a GNX. Gadelaza has a cruiser mode and battle mode. In battle mode, Gadelaza's MS head is revealed and unveils four sub-arms for melee combat. The head is equipped with a large senor(s). Its grappler arms are each tipped with a GN Beam Gun. It's the only MA that doubles as a space battlecruiser. Due to the sheer size and particle requirements to power-up Gadelaza, the unit contains the largest collection of Tau Drives.

Gadelaza contains 2 "series-type" Tau Drives. Each series-type GN T Drives consist of 3 single Drives linked together and treated as one "large" Drive although they are simply single Drives grouped together(much like separate batteries in a series electrical circuit).[2] This is further supplemented by one more normal Tau Drive used for backup purposes.[2] This brings the total of individual single Drives on the Gadelaza to seven.[2]

Gadelaza is specifically designed to be piloted by a true Innovator. The Innovator's quantum brainwaves allow the pilot to interface directly with the machine and delegate commands, resulting in quicker responses and less dependency on physical multi-tasking. The Gadelaza's engines have been shown to produce a continuous stream of GN Particle rings, similar to the Exia's GN Drive Burst. Its overall capabilities can be enhanced by Trans-Am.

The Gadelaza possesses a powerful GN Beam Cannon under the front area of the Mobile Armor. The GN Cannon can adjust it's power output depending on the situation presumably.

Gadelaza possess 2 categories of GN Fangs. It possess 14 Large GN Fangs[4] that are each the size as a mobile suit and individually possess their own GN Drive.[3] Each large type is able to release up to 10 Small GN Fangs each to bring a total of 14 Large GN Fangs and 140 Small GN Fangs.[3][4] It can be presumed that the larger type Fangs possess stronger capabilities than the smaller ones due to their size.

Four GN Beam Guns are tipped with the Sub-Arms.

It is currently unknown how many of these units were actually constructed and commissioned, but one unit was featured in Mobile Suit Gundam 00: A Wakening of the Trailblazer, where it is piloted by Innovator ESF Captain Descartes Shaman.

The Gadelaza was first seen when Descartes was deployed on a mission to destroy the Jupiter Research Station that was approaching the Earth. While his mission was successful, debris from the station's destruction fell towards the Earth, which would eventually lead to the ELS beginning to assimilate technology and attack quantum brainwave-sensitive individuals.

The next time the Gadelaza would be seen would be when the ESF Army traveled to Jupiter in order to make contact with the ELS and discover their true intentions. Using the assumption that the ELS was attracted to quantum brainwave users, the ESF decided to use Descartes and the Gadelaza as bait. Their initial plan worked, but the situation quickly soured, forcing Descartes and the Gadelaza into combat. In spite of the massive mobile armor's power and Descartes' abilities as an Innovator, the ESF Army's plan ultimately backfired when the Gadelaza was assimilated by a massive ELS, killing Descartes in the process. 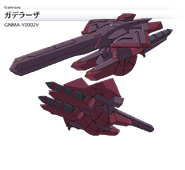 Gadelaza - Movie - A Magazine Article about the Gadelaza in the Movie. 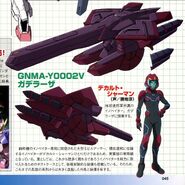 Gadelaza - Movie - A Magazine Article about the Gadelaza in the Movie.

Gadelaza - Movie - A Magazine Article about the Gadelaza in the Movie.
Add a photo to this gallery

Retrieved from "https://gundam.fandom.com/wiki/GNMA-Y0002V_Gadelaza?oldid=70682"
Community content is available under CC-BY-SA unless otherwise noted.